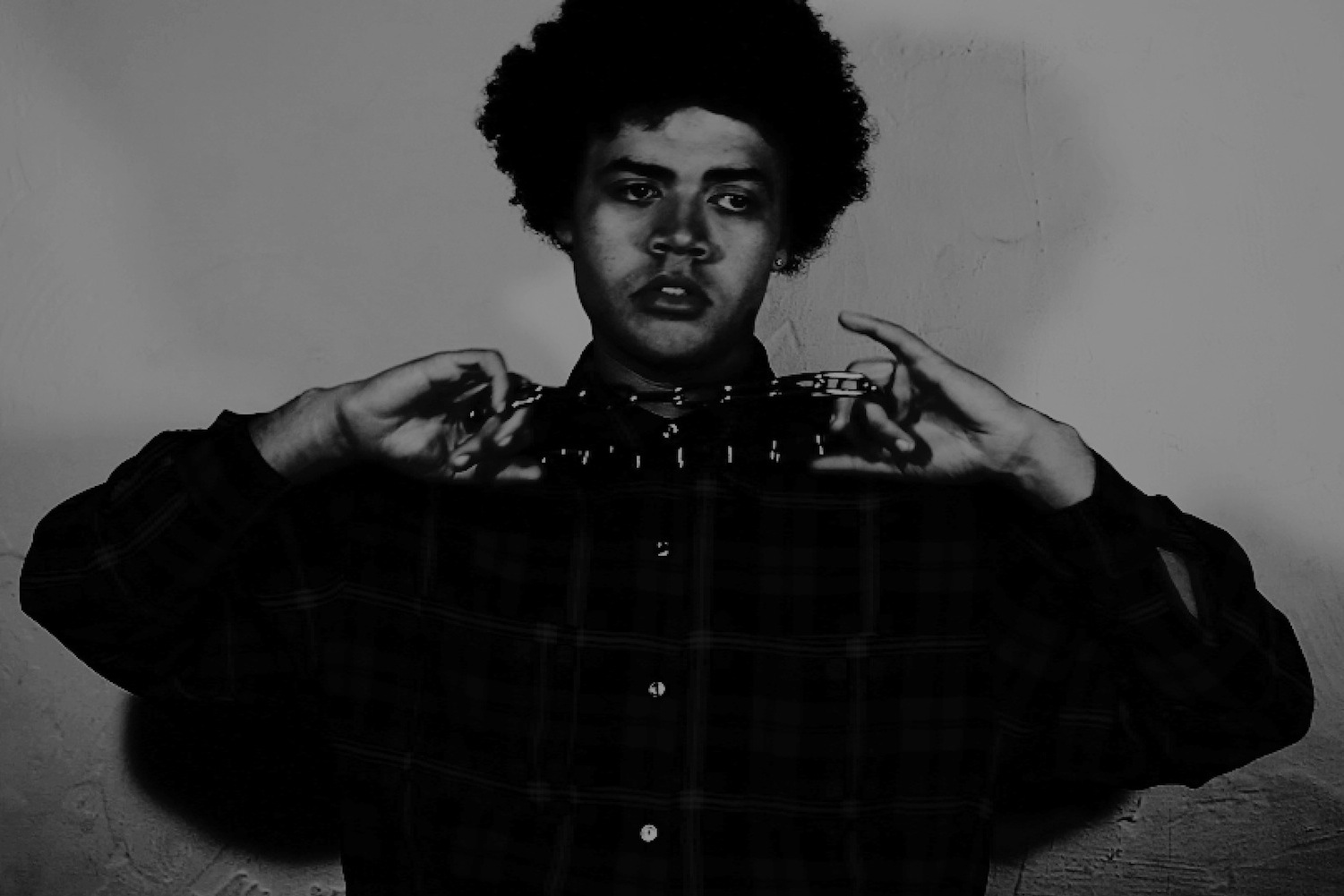 One word keeps coming up in our hour-long internet conversation with James Ferraro: excavation. Which makes perfect sense considering what an archeological dig his massive back catalog has been for the past decade, from the telling pop tropes—his version of pop anyway—of Ferraro’s solo work to the welcome experimental flourishes of his formative years with the Skaters and Lamborghini Crystal.

Unlike the plutonium-rinsed, chrome-plated cuts of the past, this week’s NYC, HELL 3:00 AM (Hippos in Tanks) album is uncomfortably intimate, cast in countless shades of grey, and alluding to karaoke-schooled R&B, stolen news broadcasts and at least one internationally famous male model. Just don’t call it “dark” like we did when we caught Ferraro during a break from tour rehearsals in L.A. last week…

self-titled: How are you doing man?
Good, thanks.

Have you been rehearsing all week?
Yeah. Just coordinating visuals, time syncs, etc.

Do you have other people playing with you?
Not for this tour, but for the North American leg, yeah.

Are you sticking mostly to new material? Or branching out into stuff that isn’t released yet and some older records?
The show is unique. It’ll showcase a lot of stuff written exclusively for live performance. It’s gonna rep my new album pretty heavily but in a more textural way along with visuals.

Do you feel like the live side of what you do is where you’d like to grow the most moving forward? You’re certainly not new to recording between your solo material and Skaters, but it sounds like you’re getting more ambitious, performance wise.
I want the live performance to present another layer of the album. I’m definitely into transcending the limitations you have as a solo artist performance wise.

Let’s talk about how this new record is almost the polar opposite of Far Side Virtual, vibe wise. This one’s like a nightmare; that one’s like some utopian future.
Yeah, I kind of feel like FSV is darker than NYC Hell but I know what you’re saying.

Maybe that’s just how it sounds on the surface.
It’s weird. When an actual story started to unfold, it was mostly from all those sessions I did around [3 a.m.]. I sort of let go of a lot of previous modes of working when I recorded this album. FSV was so focused on a conceptual level.

And what were those previous modes?
On NYC, I just sort of wrote everything down and let things come out. It was less controlled in a way. A lot of things I value about my previous work came out too, which I was happy about. It was kind of like adding to an epic poem—like a journal or a private novelette.

What do you feel like are the strongest musical strains of your previous work that came out on this record?
Urban excavation, the loneliness of the city and digital isolation are major conceptual frameworks for this album. I think before—especially with FSV and Sushi—I was into expressing the mode in which the uncanniness of late capitalism is padded by a sort of cartoony facade. But with NYCH3AM, something more personal came out. Maybe something that felt more alienated from all those themes.

Do you feel like FSV was darker because it portrays this digital world where we feel connected but are as disconnected as we’ve ever been?
Yeah, for sure. That’s in there…FSV had a cartoon facade much like Pixar does—to distract from its inherent uncanniness of simulating human beings. FSV touched on this, but it was a cultural uncanny valley. Like the ‘linked world’ sort of utopia, but then [you] have this hyper-present detachment…I was thinking more about the isolation that ensues during or after human contact—an urban alienation from all these robotic transactions.

One experience that kept happening to me while recording this record was using ATMs after midnight. In that sort of 3 a.m. late night hour [was] the uncanniness of ATMs.

How so?
The automated customer service prompts—how they try and simulate this human contact experience. This also sort of played out in my mind as an allegory of urban life, where your money gets you more contact with people—into more social [circles], etc.

It’s like proto-Siri vibes.
It’s funny you say that. I think it’s so funny how Siri never works or understands anything relevant.

Yeah, I think everyone feels like Siri is a joke.
That’s also like a weird allegory of the consumer mind lost in a world of infinite excess.

How do you feel like you relate to people on an everyday basis? Do you feel detached?
Nah, not at all. I feel really connected to people, but I just sometimes hone in on these systems of social interaction and all that.

Were you back here, living in NYC, while making this record? Or just trying to tap into that mindset from your previous years here?
I recorded the album in New York. I still live here. I’m in between LA and NY a lot cuz my label and my girlfriend lives in LA at the moment

Ah, so you were only living in LA for a little while?
Yeah but I’m back and forth.

That’s the best way to do it, although I’m sure it’s tiring.
Yeah, it’s mostly business but it’s cool.

As an artist who’s been doing this for a while, remaining underground while still making some inroads popularity wise, do you feel driven to be heard or obtain a higher level of stability?
What do you mean by stability? Like money and wealth?

Not necessarily. I feel like some artists feel guilty to make ANY kind of money, even if it’s just enough to live comfortably.
Well, I’m not really adverse to making money. You can do whatever with the money when you make it.

Right. I guess I’m just trying to wrap my head around how things have changed from the CD-R days for someone like you.
I got discovered when I was really young, putting music out on CD-R, mostly as experiments…It’s definitely interesting—the CD-R days and all that.

What were some non-musical influences on this record? Besides ATMs, of course.
A lot of those influences are in the song titles. We can break those down really fast. For example, “Nushawn,” the closing track. I don’t know if you remember this, but it was a huge media event when I was a kid: http://en.wikipedia.org/wiki/Nushawn_Williams.

Well that IS dark. Did you grow up in the Upper East Side, hence the song title on the new album that probably makes your girlfriend in LA grimace (“Upper East Side Pussy”)?
Ha. Definitely didn’t grow up in the UES. That’d be cool tho…That title is about a relationship I had a few years ago. It was a really cold, sexual type of relationship. And it was more about the walks I would take around there, sort of sizing up my motivations for being involved in it.

Love vs. sex vs. simply connecting to people appears to be a big part of this record. Re-listening to “Nushawn” right now, by the way. It ends with the words “American violence.” Is that sampled from a news story?
Nah, that’s some text-to-speech I did…I was looking at it as a symbol of distress or something. More like a lore of anxiety enacting…

Self-destructive behavior?
It’s sort of like a symptom of something larger, maybe…The track “Beautiful Jon K.” is about the male model Jon Kortajarena. Do you know him?

I do not.
I feel like a lot of men aspire to look like him, and his look is very allegorical to me.

I like how this interview is its own impressionistic painting that i can’t quite decode. Did you read a lot of philosophy as a kid?
I’ve read things here and there, philosophy wise…I take a philosophical perspective to everything I read, so I kind of find a lot of stuff fascinating.

Right. Same reason I took college courses about things like David Lynch and dream theory.
Yeah, for sure…Foucault is my favorite philosopher.

Why Foucault?
He’s just one thinker I’ve always came back to, and even found myself having my own insights into the world that’ll discover later that he wrote amazing text on that subject.

What are some basic takeaways you’ve had from him that stuck with you?
Ha. It’s way winded but it’s in the record, for sure.

So people need to dig a little?
Yeah, or just be open.

Do you think it’s easier or harder to find people who are open to something as complex as what you’re describing to me? I mean, it’s such a singles-driven iTunes culture now.
I don’t think its harder; I think we just have been trained to relate positive experience to consonance. But that also is a beautiful thing…I hear beautiful melodies in dissonance. It’s always been a part of what I explored aesthetically.

So that explains why I thought the new record was ‘dark’ initially?
No, there is a shadow, or something sinister, lurking on this record. But it’s inviting; I want it to be heard.

Here’s a good question to end on: You’ve compared your catalog to impressionistic paintings in the past. What’s this one of? Not just New York at night right?
No and yes. That’s definitely part of it. The album is an excavation of the world I was living in at the time.

Which was very solitary?
There is an inherit isolating experience in urban life, but that doesn’t mean not being around people in a physical sense…I really honed in on my environment and my experiences .

NY has so many different pockets to it. What was your environment, generally speaking?
Everywhere—clubs, apartments, streets, the train. You know?

Yeah, I know. It’s part of why every time I think I might move I just can’t.
It’s beautiful tho.

It’s funny that you say it’s beautiful and yet the title alludes to hell…Life isn’t that simple tho.
Exactly.

Previous Spiritualized Send Cut Copy’s “Free Your Mind” Straight Into the Stratosphere
Next Oval Releases New Album, Sets Out to ‘Poke Your Soul’ With ‘VOA’ Video