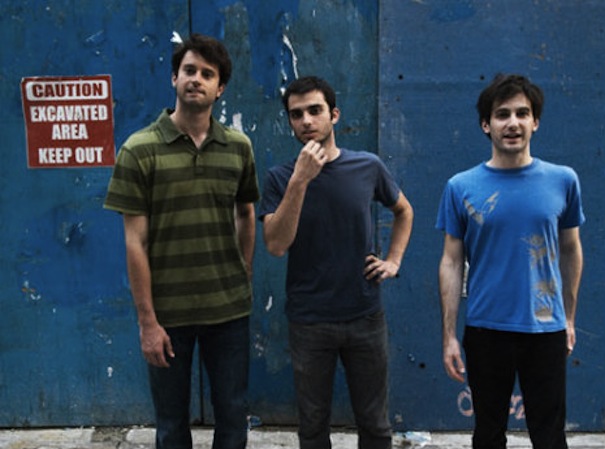 Breaking is a recurring self-titled feature where we introduce you to an artist who you’ll be hearing a lot more from this year.

Can you start by telling us the source of the volcanic angst on Trash Hit?
Nick Sylvester: We just found ourselves attracted to a very specific kind of aggressive-but-melodic rock music, and wanted to make more of it. As far as I know, none of us are particularly angry about anything.
Adam Moerder: Yeah. Not to split hairs, but I always hope the music comes across as more excited or mischievous than angry. After doing some of the screamier vocal takes on the record, I remember thinking, “Boy, I hope people won’t think I’m telling them to shoot up a school or something.” We’re attracted to aggression as a musical quality, not necessarily a psychological one, if that makes sense.

References and comparisons are inevitable, so let’s get them out of the way. We hear the Pixies, Nirvana, the Wrens, and Husker Du–how do you feel about that assessment?
Nick: Totally. I’d add Naked Raygun, Fitz of Depression, Halo of Flies, Buzzcocks, Breeders, all the Iain Burgess-type stuff. Pixies and Nirvana are great, obviously. We love those bands and I’m thrilled our songs remind you of theirs. The world needs more songs like this right now–desperate stuff that makes the case for music being a thing worth caring about. Physical and immediate but still very beautiful stuff. It’s the same quality we respond to in newer bands, too–stuff like Sleigh Bells and LCD Soundsystem and Black Dice.
Adam: Can’t complain with that list! To put it about as succinctly as I can, I like emotional extremes in music. The more storm and stress, the better. Those bands–especially Nirvana and Pixies–do that stuff very well. Though honestly, we’re looking way further back than that. We want to sound like a band that would’ve been popular in 1780s Prussia.
Nick: Yes. The next record is all Schiller, no filler.

People have always said, “Those who can play music start a band. Those that can’t become music journalists.” Oddly enough, the two of you are/were music journalists. How did that affect your approach to songwriting?
Nick: Adam and I were playing music before we started writing about it. Writing about music, for me, was born out of poverty. In college I didn’t have money for concerts and records. Calling myself a music writer was how I got around that one.
Adam: People don’t seem to believe me when I say this, but I learned next to nothing about songwriting from writing music criticism. The two tasks are performed in totally different areas of my brain. The only way being a music critic helped me as a musician was by helping me discover great music I otherwise might not have heard. That’s about it though.

“These aren’t the sort of people you want to tangle assholes with, so I have to do the passive-aggressive artist thing”

Adam, you moved to New York not too long ago. A lot of the local sound is now focused on hazy bedroom psych-pop–music intent on sounding lazy and unambitious. How have you found the local scene responding to a burgeoning post-punk trio that plays with its fists?
Nick: Everyone loves us. Todd P begs us to play shows. Edan would have us at Death By Audio every night if he could afford to. Only the Bowery Presents guys are hesitant to book us, but that’s because of that New Yorker article about crowd control. That piece put us in a bad spot with those guys.
Adam: Everyone hates us. During some of our shows, I peer out into the crowd and see these faces looking at me like I’ve just committed a war crime. Certain coffee shops refuse to serve me. I’m not allowed to use the water fountains in McCarren Park. Some guy at Union Pool grabbed me by the collar and threatened to cut me nose to navel if I don’t learn to â€œchillax.â€

Mr. Dream is a Punch-Out video game reference. Yet a recent profile of the band claims that it’s an homage to Nick’s dad and his dreams unfulfilled. How depressing. Is that true? If so, what does Nick’s dad think of Mr. Dream?
Nick: We had a song called â€œLawnmower Manâ€ that was an internal rant/daydream of a man mowing his lawn. Maybe the wires got crossed there. To be clear, my dad is the best. A phenomenal drummer. He lent us his Ayotte snare for one session, which makes what’s basically the Platonic form of snare sound. That’s what you’re hearing on â€œUnfinished Businessâ€.
Adam: Here’s how I remember it. We’d email each other these ungodly lists of potential band names. I’m talking about 50 band names at a time. Eventually Mr. Dream appeared on a list and we decided that was the one. Personally, the name makes me think of this sad, meek personification of the American dream. Like Mr. Dream is this balding guy who works in the cubicle next to you. And he’s been working there for twenty years, trying to pull himself up by the bootstraps. I never played Punch-Out as a kid.

On your Kickstarter page from 2009, you offered round-the-clock relationship advice to a donor willing to donate $2500. Can you give us an example of the advice you would have given?
Nick: Don’t play demos for girlfriends.
Adam: Take at least one moment every day to let him/her know how special he/she really is.

There’s some frustration with the corporate life in your lyrics and music. For some strange reason, I keep thinking of Fight Club when I play the record. What kind of jobs have you guys had collectively and which one was the most frustrating?
Adam: Honestly, it’s these fat cat jerkoffs at [our label] God Mode. They eat their big fancy steak dinners and smoke their imported cigars and then turn around and try to tell ME how to make a rock record. Ridiculous. The problem is, these aren’t the sort of people you want to tangle assholes with, so I have to do the passive-aggressive artist thing and write lyrics about them instead.

What’s the story behind the album title?
Nick: Adam had just read Underworld. For a while after that, he was super into trash. I live with the guy and at times it was very difficult–during the trash phase. He didn’t want anyone to throw anything out.
Adam: The song “Trash Hit” was named first. When I was working on it, I had just finished reading Underworld and had started watching The Sopranos. Waste management really struck a chord with me. Not to mangle DeLillo, but I was fascinated by his idea that we, as Americans, are defined by our waste. Plus there’s the whole â€œone man’s trashâ€ aspect of it. So yeah, Nick, that’s why I refuse to take out the trash.

Were there any leftovers from the sessions for this record? And stylistically, how do you see Mr. Dream progressing over the years?
Nick: We try not to think about the songwriting process. I know that’s the typical annoying bullshit musician thing to say but it’s actually true. The three of us keep writing and bringing stuff in every week–totally uneven and incomplete songs that sound a lot like stuff we’re each currently listening to. There was a week or two when everything I brought in sounded like early Ministry. It’s immediately obvious to us in rehearsal–when we play a new song through–what works and what doesn’t. From there you realize, for instance, you have like 18 different mid-tempo songs that all leverage the same six-four verse trick. You pick the best song in the â€˜six-four verse trick’ category and don’t look back. The sound of the record tends to just congeal over time that way. The songs just start sounding like â€œMr. Dream songs.â€
Adam: It was definitely tough to say â€œokay, pencils downâ€ and accept that these 13 songs would be the final 13 for the album. That said, we already have a handful of new material that we’re very excited about. As for any semblance of a process, I think Nick nailed it. We bring in as many ideas as we can, sort out what we like and start building songs out of it. As of right now, I’m only able to conceptualize things one song or one idea at a time. I can’t sit here and pretend I even know what the next Mr. Dream album will sound like, let alone beyond.
Nick: It’ll sound like early Ministry.

You two both met while writing for the Harvard Lampoon. Can Matt chime in on who he thinks is funnier?
Nick: We don’t know where Matt is right now. But we’ve talked about this before internally. What we decided on was this: Adam would be the funniest. Matt would be the smartest. I’d be the fattest.

“The goal is to get fat, but not too fat”

The overall reception to the record has been positive so far. Incidentally, one reviewer said they heard Rage Against the Machine at one point. Is that nuts?
Nick: You really have no control over how people will react or what they’ll hear in your music. People hear what they’ve heard, if that makes sense. Matt’s dad heard one of our hardest songs and said it reminded him of that fuzz band Status Quo.
Adam: I’m still at the stage where I feel immensely flattered whenever someone takes the time to write more than 25 words about us.

Can you tell us about the sculpture on the album cover art? And the liner notes that Chris Ott wrote? Better yet, can you sum them up for us? They were kinda long.
Nick: Chris was a god to me at Pitchfork. I can’t think of a bigger honor than him supporting this band. You should read those liners, if only for the ideas he has about nostalgia and new music and what it means to work deliberately in the ’80s punk tradition. He also just posted Side B to the Mr Dream Mixtape on his blog Shallow Rewards.
Adam: I cosign everything Nick says about Chris. The guy just blows me away. I’ve spent an unacceptable amount of time at my day job rummaging through his canon. Knowing how much he thinks and cares about music, I’m humbled by the fact that he enjoys the record. The cover is from an exhibit on this guy called the Philadelphia Wireman. You can read about him here.
Nick: It’s [from a piece] called “Planters Peanuts.” All these wire sculptures were found on the street outside a Philadelphia halfway house in 1982. As far as physical embodiments of our record go, this is pretty close. The Philadelphia connection was special, as was the year they were found, which is my birth year. William Shearburn, who runs the William Shearburn Gallery in St. Louis, Missouri, granted us permission to use that photo. The sculpture is in his private collection.

What does 2011 hold in store for Mr. Dream?
Nick: In May, we go on a short tour with Sleigh Bells and CSS. The goal is to get fat, but not too fat. It’s going to be about not eating hummus and cheese all the time, only most of the time. I want people to say we’ve changed after touring, but not quite be able to put their finger on how.

Previous FROM THE STACKS: Dirty Beaches
Next Pitchfork Announces First Round of Music Festival Acts, Including Animal Collective, TV on the Radio and James Blake