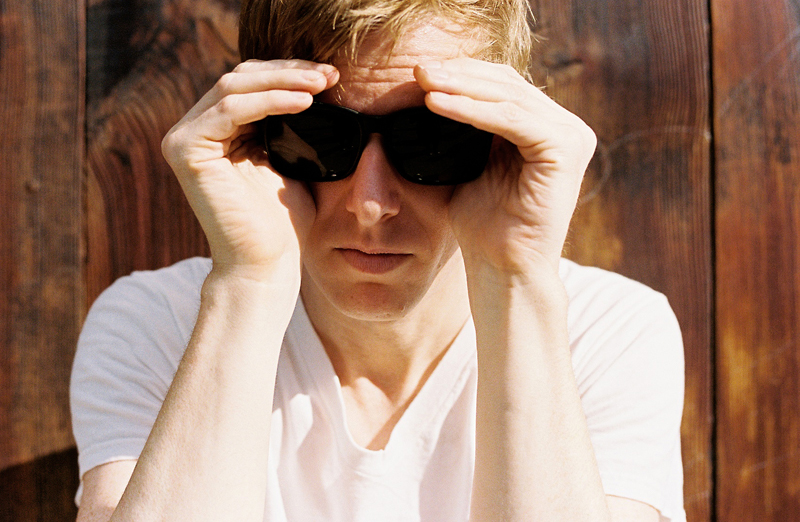 In the following self-titled exclusive, we ask the three very different members of Divine Fits–Britt Daniel (Spoon), Dan Boeckner (Wolf Parade, Handsome Furs) and Sam Brown (The Sun, New Bomb Turks and many other hired gun gigs)–to interview one another about their past lives in LP form. The Q&A below is an extended version of the one that will run in our fall issue next week…

The Sun, â€œSo Long, Sundaysâ€ (Don’t Let Your Baby Have All the Fun, 2009)
Britt Daniel: I like the way this song starts. It’s like it’s showing how the song was recorded, with different instruments taking their time and casually popping in. My first question is what was that synth sound made up of? How did you guys do that?
Sam Brown: It was a mix of a keyboard and a guitar, I believe. I actually wrote this song. The reason it’s built the way it is is I went in and played the drums first, and then counted off where the guitar came in. I recorded the lead with a guitar that was super distorted and then doubled it with different key and guitar chord combinations until we found something special.
Britt: Did you do all of that with [producer] Mike [McCarthy]?
Sam: Yeah, we did all of it with Mike.
Britt: He co-produced a bunch of Spoon records. How did Mike get involved?
Sam: We had a record on Warner (Blame It On the Youth), which tanked like a lot of other bands’ major label attempts, and he just came out of the woodwork. He called our manager and asked what we were up to, why we weren’t active at all because we were laying low after the Warner thing, hanging around Columbus, trying to figure out what our next plan would be. Mike really liked the record we made for Warner, so he offered to record us on spec. So we got to work on writing and arranging stuff, and he came up to [Ohio] a couple times.
Britt: What was your first impression of Mike? Because I know he can sometimes not make the best impression.
Sam: I think I was just appreciative that someone we didn’t know wanted to help us out. So yeah, I had a good first impression of him. He showed up with his girlfriend; they were getting along at the time [laughs] and by the time we started working together, they weren’t, so that was kinda strange at times:I learned a lot about recording by working with him, though. It was really a great experience.

Handsome Furs, â€œWhat About Us?â€ (Sound Kapital, 2011)
Britt: Dan, this was your first side project right? Your first supergroup?
Dan Boeckner: Yep, my first supergroup, with my super famous wife.
Britt: Well I love all three of the Handsome Furs records, but I think my favorite was the last one. I was listening to a bunch of songs on it today, and kinda wondering about â€œWhat About Us?â€ It’s a tune that sounds political at times, as if you’re voicing the concerns of a class people who otherwise don’t have one, but there’s also some pretty personal stuff on there, like â€œI’ve been living nice aloneâ€ and â€œgo on and break my heart.â€ So I was wondering, is there an explanation behind that? [Laughs]
Dan: Yeah. That’s pretty much it–most of the Sound Kapital record is based on my impression of the underground music scene in countries that don’t have a lot of money, or aren’t capitalist countries. So I had these lyrics, and this sorta â€˜90s house track I was working on with a drum machine, so I thought it’d be cool to mash them together. I was originally going to use those lyrics for more of a punk rock, guitar-based song, but I thought it’d be cool to put it on top of this house beat. Gradually, the song developed where it needed a part B to it, so I started singing kinda random stuff and this sad, introspective end to the song developed. It happened by accident, and I glued those two things together.
Britt: Right; because it goes from talking about a crowd, then zooms in to focus on one individual person.
Dan: Yeah, I wanted the beginning to be someone speaking for the crowd, and the end them speaking for themselves.
Britt: I know that’s the first record you made where you weren’t involved with the mix. Did the songs sound radically different before you got the final mix back?
Dan: They didn’t sound too different. It was a weird thing where me not being involved in every step of the mixing process helped it sound the way I wanted it to more than me sitting there the whole time, tweaking the faders. I liked working that way.

“Well, that was my life then” Sam Brown, â€œuntitledâ€ (unreleased)
Dan: I don’t even know the name of my favorite song that Sam’s been involved with. It’s not a Sun song, or a New Bomb Turks song:During one of our residency show nights in L.A., Sam and I were driving back to his friend Brad’s house and he played me this solo demo recording that was totally fucking amazing. It’s really upbeat, and very melodic. Sam’s got a really great voice, like a Lindsey Buckingham-style voice. It’s almost like a power-pop song in the best sense–great keyboard hooks. I love it.
Sam: That song doesn’t have a name yet. It’s just a demo. That’s really nice of you man. Thanks. My wife went to San Francisco for the weekend, so I set up my drums in the living room and made a song up and demoed it. But then I started working with you guys, and haven’t done anything with it since. [Laughs] So I’m hoping I can get back to finishing that stuff this winter. When I was in the Sun, the band bought a laptop. It was the first time I used Pro Tools, so I decided to write a bunch of songs that ended up on the Sun records, and have been demoing stuff on it ever since. I also have a band that I play with at home, but I treat it as more of a local thing, with friends and stuff. I’d like to complete some recordings this winter, though, and maybe put something out. I’m still learning the art of refinement. It’s a real skill to be able to sit with a song, and have the patience to find its sweet spot. I’ve learned a lot about that from working with Britt.

Spoon, â€œMountain to Soundâ€ (Soft Effects, 1997)
Dan: This is one of my favorite Spoon songs. I could never figure out what it’s about, but I like it. I feel like the lyrics are very evocative. I’ve listened to it on tour a lot, and somehow I’ve connected the lyrics to being a band on tour, and building this thing. Is that close to the meaning?
Britt: I guess so. At that point, I don’t know if I was focusing on making a song about anything, but it was a collection of lines that had happened on tour. The title, â€œMountain to Sound,â€ was a road sign I’d seen somewhere in the Pacific Northwest. There’s also all of that stuff about waiting at the airport.
Dan: When I’m at an airport on tour, this song always comes back to me, yeah.
Britt: Well, that was my life then. Actually, there weren’t too many airports, but there was a lot of traveling in vans, and a lot of waiting around.
Dan: Did you record this on a four-track?
Britt: Yeah. And before I put words on it, I thought it was the best thing we’d ever done. In fact, I thought about leaving it as an instrumental because it sounded so good. We just lucked into this thing where it builds and builds, and then it just explodes.
Dan: That song was done pre-2000, right?
Britt: In the summer of ’96, yeah.
Dan: Oh right; I would have been graduating high school then. [Laughs] Do you feel like it’s possible to do something as widescreen as â€œMountain to Soundâ€ now, on an iPad or whatever? Do you feel like the physicality and limitations of the four track forced you to be more creative because you had more choices?
Britt: It did. Because we had only four tracks, John Croslin, the producer, had this brilliant idea of hard panning everything–the guitars all to one side, the drums all to one side–then that’d be its thing. It’s totally separated, an old-school, unique sounding recording. We did it in this tiny, tiled room. The sound of that room was unbeatable.
Dan: I like hope the snare sound in that song has its own note. It’s like the melodic presence in that song. You don’t hear that a lot.
Britt: We might have tried to get rid of that [laughs], but I don’t think we could. I guess it was a good thing that we couldn’t.

Spoon, â€œStay Don’t Goâ€ (Kill the Moonlight, 2002)
Sam: This song made me love Kill the Moonlight. What’s that sound that keeps going in and out?
Britt: That’s a trick where you put one single hit–It think it was a keyboard–in time on a few places in the track, and then you turn the tape over and put a delay on it. You record the delay backwards, so that’s why it sounds like it’s jumping in [makes a stuttering sound].
Sam: The other thing I noticed, aside from the offbeat guitar part, which I’m a fan of, is there’s a Wurlitzer part that comes in once. I love that part. It’s fucking awesome, man.
Britt: Thank you man. [Everyone laughs]
Sam: Yeah, that song’s ripping. That’s all I wanted to say. I just wanted to get my Spoon comments in.

Wolf Parade, â€œShine a Lightâ€ (Apologies to the Queen Mary, 2005)
Sam: I know this was one of the singles from your record, but there’s a reason for that–it’s a really ripping song. What I like about it so much is there’s the tightness of a band playing, but there’s also this really great, loose sound to it. The drum parts have this really sweet shuffle in the snare.
Dan: That song’s kinda funny. I think Sub Pop wanted it to be the single before the album came out. We were recording with Isaac Brock in Portland, who’s a really good friend of mine. And there’s a whole different version of that song from that. He had obligations with Modest Mouse, so we ended up having to make a lot of the record ourselves. But the original reel of that song kinda went missing. I still don’t have it. So we were stuck in this position where we had no money and had to record this song, so we took this Mac G3 tower and used this bizarre multitrack recording program. Tim Kingsbury from Arcade Fire came down to play bass, and we just tracked it live in a couple of takes, then I did the vocals a few minutes later. That was that.
Sam: That must be why it sounds the way it does.
Dan: I think we used the worst microphones for that.
Sam: It doesn’t really matter, as long as you have a good sounding room. Plus I like how trashy it sounds.
Dan: Yeah, it just sounds like us.