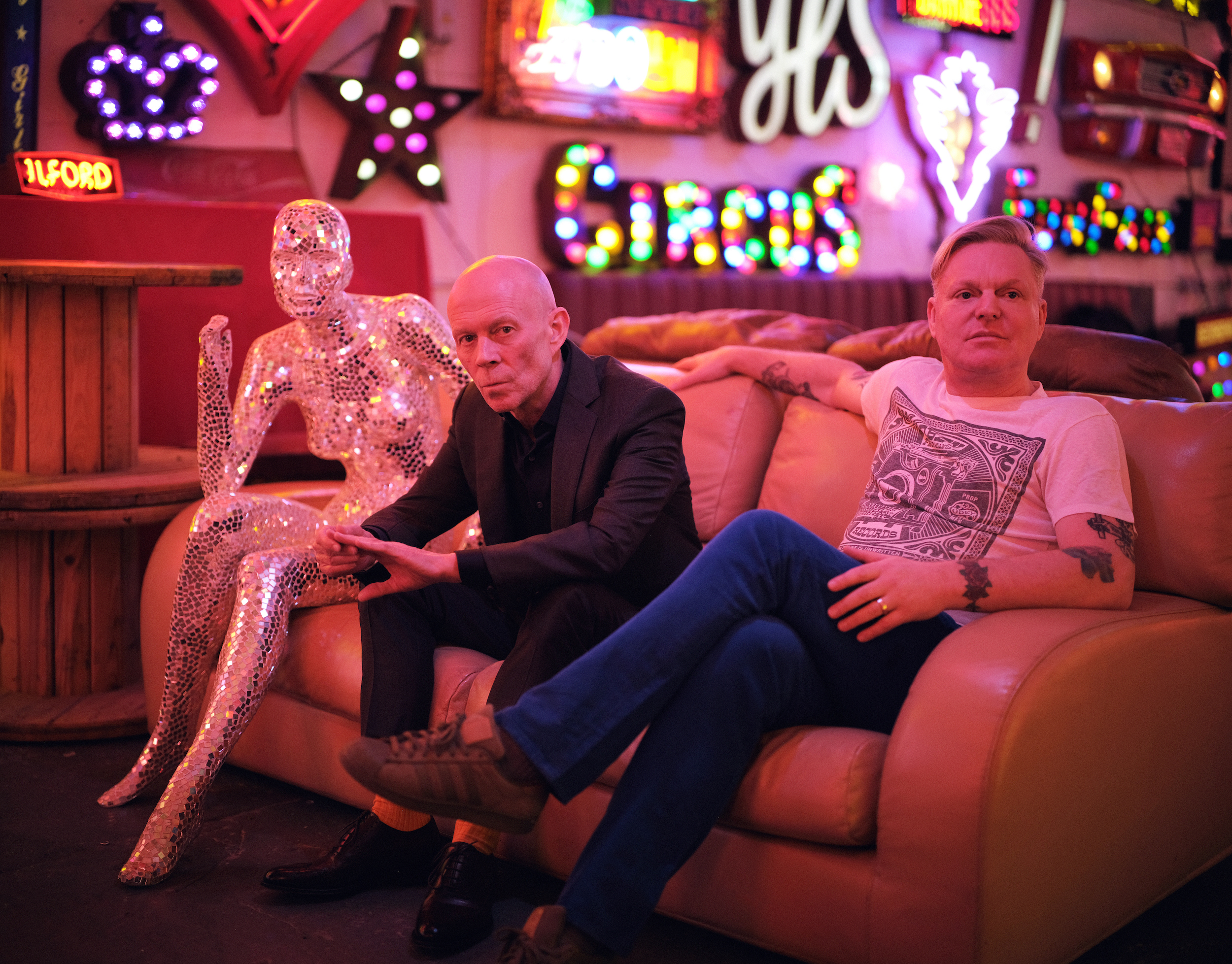 It's hard to think of a more apropos time than now — a year plagued by darkness and uncertainty — for an Erasure album like The Neon.

For one thing, there's the music itself; warm and welcoming, it finds Vince Clarke embracing the lustrous synth lines of his trusty analog gear. Going right along with that persistent electro-pop groove is Andy Bell's glowworm hooks and hopeful melodies. Taken together, it's a reminder of simpler times, of how we'll all meet again on a dimly lit dancefloor someday.

"It was about refreshing my love – hopefully our love – of great pop music," Bell says of the duo's songwriting and recording sessions. "I want kids now to hear these songs! I wanted to recharge that feeling that pop can come from anyone."

In the following exclusive, Erasure digs even deeper, sharing their entire album along with Bell's track-by-track commentary....

''HEY NOW (I THINK I GOT A FEELING)''
I can't remember which order it was written in. I remember it was one of the later ones in Vince's studio in Brooklyn. Vince had already worked on the music at length. Usually when we're songwriting together, we're writing to basic chords, but this time it was nearly finished tracks. He had been honing particular sounds on each track and this was one of those songs.

I loved how it started off with a Giorgio Moroder-type sequencer. Vince said, "Hey look, I just discovered how to do a Giorgio Moroder sequencer!" I thought he knew ages ago how to do that. Something must have clicked in his head so he kind of got back to – which I love – that kind of phasing. Sometimes when you listen to Moroder, he'll have two drums going at the same time and they'll kind of phase in and out of each other. That was the feeling behind the synth on this track.

All of a sudden, a light came on. I was feeling very optimistic. It felt like after the World Be Gone album we put all of our seriousness to bed. I tend to worry quite a bit and get a bit preoccupied. I was worrying about world politics and all that kind of stuff. Still now, I'm obsessed with the newspapers and reading about U.S. politics.

For some reason, I thought, 'Come on, you're really privileged being a songwriter and musician, doing something you love. You have a great living; you have nothing to complain about whatsoever.' It really made me remember my first love of music — hearing pop music when I was 14 or 15 years old. I remember the excitement of going out and buying those first singles. It was sounds you'd never heard before, like Lene Lovich, The B-52s, and The Tourists, who later became Eurythmics. It was like 'wow!'

"Hey Now" is about all of this. We were recording the vocals in Atlanta and I hadn't been there very many times apart from when we played there. It was probably my third or fourth time, and it was lovely just being able to spend time there. It's that feeling of when you're on tour and you arrive in a new city – and I think we all do this, even when you go on holiday – you just reinvent yourself overnight. You're a different person; you can be whoever you want to be because nobody knows you in the city.

It's that feeling of embracing the city, going out, and not being who you perceive yourself to be. You can be whoever you like.
''NERVES OF STEEL''
This is my favorite track on the album. This cements the relationship between myself and [my husband] Stephen [Moss]. I feel so lucky to have been loved twice in my lifetime. It really feels like Steve and I against the world. We're not against the world, but it feels like we can do anything.

I've got a tattoo on my shoulder of The Little Prince. He's alone standing on his planet. I think I should maybe get one of Steve and put him standing beside me on there. Because that's how it feels. I just love how the song came out. It's almost an electro-rock anthem.

The motel reference in the lyrics is a place in Atlanta that does the most amazing cocktails and has a really sleazy strip bar downstairs. We never went down there. I was there with Steve's sister and her Christian friend, so we got merrily drunk and left before it was time to go downstairs.
''FALLEN ANGEL''
I don't really know where it came from. The chorus is really strong. I love the chorus, I love the sentiment about doing things you've never tried or never dared to do before. What happens with me, because I'm Taurean, I've always prided myself on being a daredevil. Vince always describes me as being fearless, but he doesn't understand the quaking underneath and how much courage it takes. Especially going out on stage.

I always champion myself as somebody who enjoys meeting all kinds of people no matter where they're from and trying all kinds of food. I remember we were on a boat in Mallorca and I really wanted to do paddleboarding and I couldn't even stand up on it. I was getting myself trapped between the paddleboard and the boat and I didn't want to get myself cut in half. It was just this feeling of defeat. I think "Fallen Angel" reminds us it doesn't matter how indestructible you think you are, we all have an Achilles heel somewhere.
''NO POINT IN TRIPPING''
I suppose it sounds drug-induced, but it's about being in your house and being confused. I think it's more a thing of being insecure. I think it was one of the first songs we did.

All the lyrics were written in Atlanta, and they came from a stream of consciousness. It was like auto-writing. I'm always a late night person, so I would maybe have a glass of whiskey and get writing around 10 or 11 at night or two in the morning. Sometimes I'll be up until daylight. I tend to go around the clock.

Maybe that's what the song is about: having no internal clock. I was the same in school – never ever went to bed until midnight, started doing my homework, didn't get to sleep until four or five o'clock in the morning. In some ways, I wish I had that discipline of a 9-to-5 job, but no.
''SHOT A SATELLITE''
I asked Vince, "Have you been listening to Lady Gaga?" He swore to me he hadn't been. I don't know her music by heart, but I thought, 'Hmmm.'

I love the intro. I love the treatment of the song. This reminds me of Klaus Nomi: "I'm gonna lasso you with my rubber band laser."

It's that kind of feeling; it's sci-fi-ish. I imagined a shooting range, but instead of being at the shooting range, you're aiming your rifle at the sky and shooting a satellite down because you don't agree with the information that satellite is beaming around the world.

At the same time, it's kind of like showing off machismo to your lover and really saying that you would go to the ends of the Earth for them. A bit like "Nerves of Steel."

''TOWER OF LOVE''
This song was taken from the tarot. The Tower is an impending doom sort of card. That's how it's seen, but it's not necessarily the case. It's about the house of cards falling down. It's about renewing yourself.

My friend asked me if I would write a song for her because she was not in a happy place with her relationship. I wanted to write a Hans Christian Andersen fairytale song for her. That's one of the most musical songs on the album. I think it maybe belongs in a musical that hasn't been written yet, along with "Siren Song" and "Home" from the Chorus album. It's obviously about being trapped in a loveless marriage.
''DIAMOND LIES''
One thing I love about all of these songs is when they were written, they reminded me of the uniqueness of '80s synthesizer music. A lot of the sounds Vince has created for this are amazing. Because the instruments were always associated with the '80s; you kind of get that tag. But for me, they sound really fresh and present. They could be from a new band that nobody has ever heard of before.

So that's almost why we called the record The Neon — because it's like a new band name as well.

This reminds me of "Love Is A Stranger" by Eurythmics. "Diamond Lies" is about the inaneness of fame — how people get into hysterics, how they want to be in the golden circle. When you're in the business, you know that you're creating an illusion. But at the same time, it kind of applies to a lover you don't want to be with anymore. It's really about keeping somebody at a distance.
"NEW HORIZONS"
This was a really simple ballad on the piano. It didn't need much more. I think it speaks for itself, really — It's like nothing lasts forever.

If you're going through a bad patch, don't dwell on it. The tides change. Every day changes and every day is a brand new day. You don't have to be stuck in that same mindset. You can change it.

It's like when you're a bit all over the place. When my partner Paul [Hickey] was really ill it was a struggling time and this is like telling yourself to give yourself a break.
''CAREFUL WHAT I TRY TO DO''
That's like our Cee-Lo Green song — one of those club songs you can imagine being played around the swimming pool or something. It's another one to my love of Steve.

This song is about being in his club and him being so careful and taking care of me. We met in a drag queen's dressing room, where all of the drag performers get ready at The Honey Pot in Tampa. I thought it was very apt. He closed the door, put a security guard outside the door, and just kept bringing in bottles of tequila. We were there until really early in the morning and I canceled my flight to the UK the next day.
''KID YOU'RE NOT ALONE''
This is a lovely song; it's very personal. I wouldn't like to say who it's about, but for me it's for any parent looking after their teenage child and telling them not to worry — it's all going to be fine.

It seems like hell when you're going through these things when you're a teenager. That's your whole life. You can never see the end and you think it's forever. It's just saying, 'You're going to be fine, don't worry.' 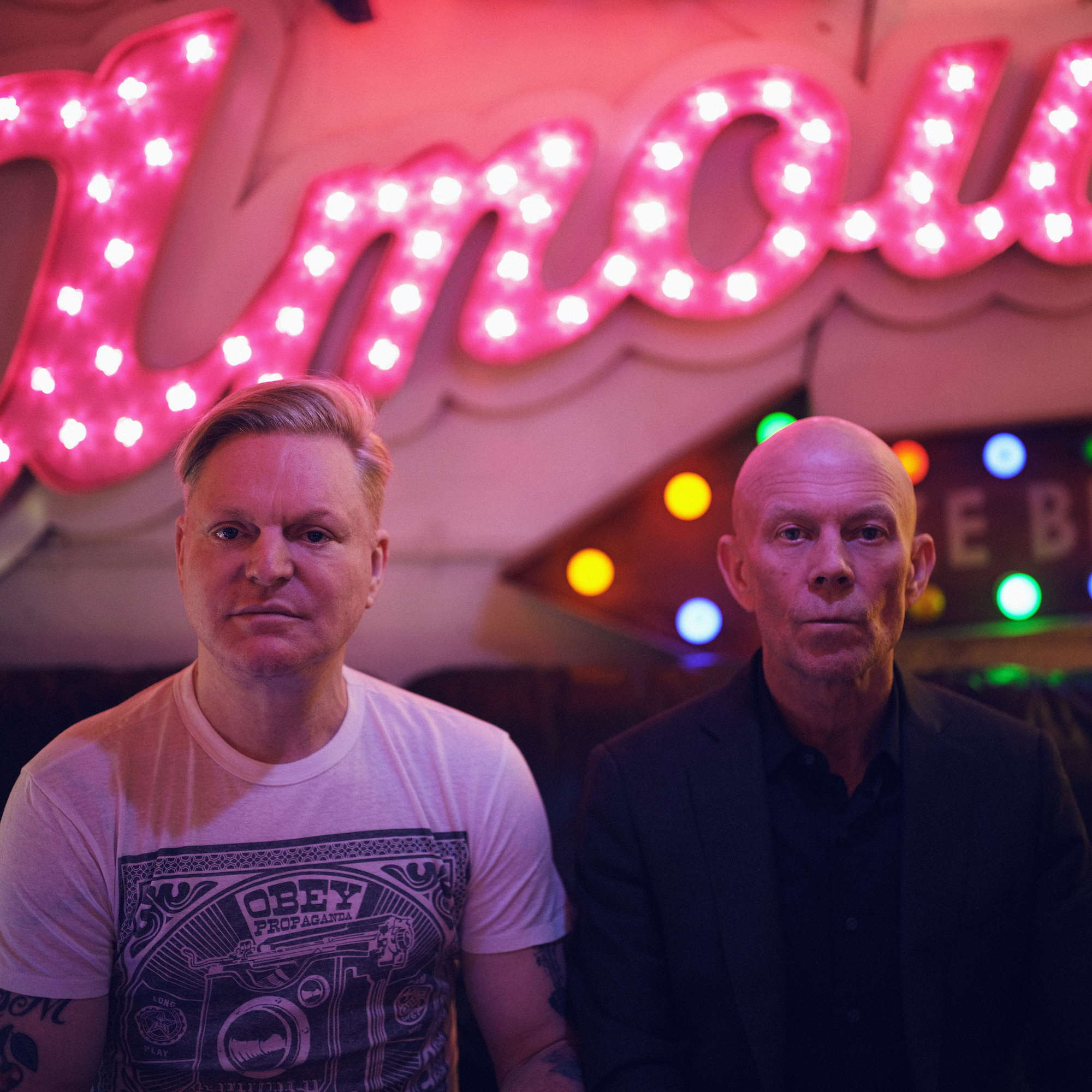