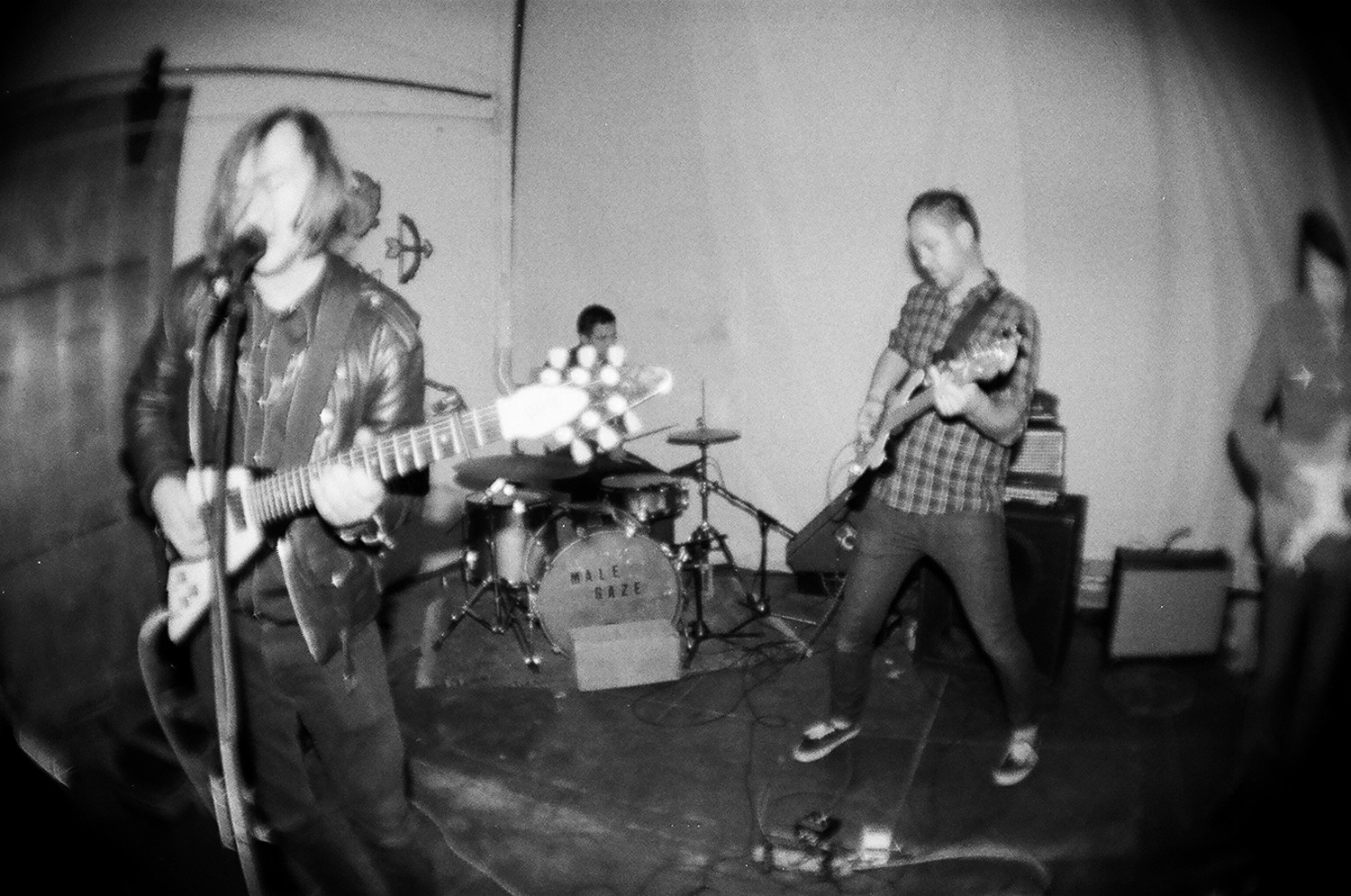 In a lot of ways, King Leer is Male Gaze’s family reunion record, putting the boys (Matt Jones, Mark Kaiser, and Adam Cimino) back in touch with a few of their old bandmates from Blasted Canyons (guitarist Adam Finken) and Mayyors (resident Castle Face engineer Chris Woodhouse) for a tour de toxic pop. (Fun fact: Blasted Canyons also featured Wax Idols frontwoman Hether Fortune.) In the following exclusive, we stream the album in full a few days before its Friday release along with “CliffsNotes” from Jones, who began by saying, “Here, friends; a listening guide to the Gaze, for your health and hygiene. Don’t say I didn’t warn you”…

“GOT IT BAD”
Have you ever thought to yourself, “What the hell are you doing? Are you out of your mind? You must have it bad?” This happens to me often. Easily mesmerized, not so easily revived. Here we go again…

“LESSER DEMONS”
This song started as a teetering tower of nonsense and look where it ended up? As a single.

“KRAV MAGA”
Named after a Israeli style of martial arts. About the gym but also, ya know, how there’s often a badass hottie Israeli Army chick in action movies? She’s there too.

“GREEN FLASH”
If you watch the horizon at the beach at just the right moment there’s a split second green flash as the sun momentarily shines through the water and reminds us how the earth is round…. I usually skip this song.

“EASY TO VOID”
This song involves a lot of violence against my guitar. If the neck snaps off and severs my jugular someday it’ll be because of this one. Fun fact: I thought I had this totally cool vibe in mind for the lyrics, I was all stoked, laid it down, and only too late did I realize that I’m basically describing the plot of Blade Runner.

“BAD OMENS”
I’m really good at ignoring red flags; so good, in fact, that this dubious trait merited an inclusion here on my wall of shame. Maybe English in its lovely elasticity can accommodate “statue” as a verb cause people are doing it to me all the time, and I give just as good as I get.

“RANESSA”
The names have been changed (shout out to my friend Ranessa Allen who said I could use her name), but this has happened to me countless times—don’t let your eyeballs get ahead of you. The internet can get you all spun out over nothing.

“STUPID HEART”
I am always monkeying with the speed of songs; to me the soul of a song can be lost if it’s too slow, or too fast. I’m sure it drives everyone crazy but I’m convinced that its true. I’m used to recording with tape at home and playing with the speed knob just like all the rest of the knobs and sometimes a little bump in either direction makes or breaks it. This one took a lot of nudging. Luckily my life coach Matthew Morgan and I locked it down after Thanksgiving dinner. An ode to avoidance.

“This Is It”
Written on the back of a parking ticket, in a park-let. This chorus came to me as I was merrily driving a U-Haul truck in the opposite direction of San Francisco. It went from leak to lake so fast…