INTERVIEW: Twin Shadow Invites Us Over For Dinner 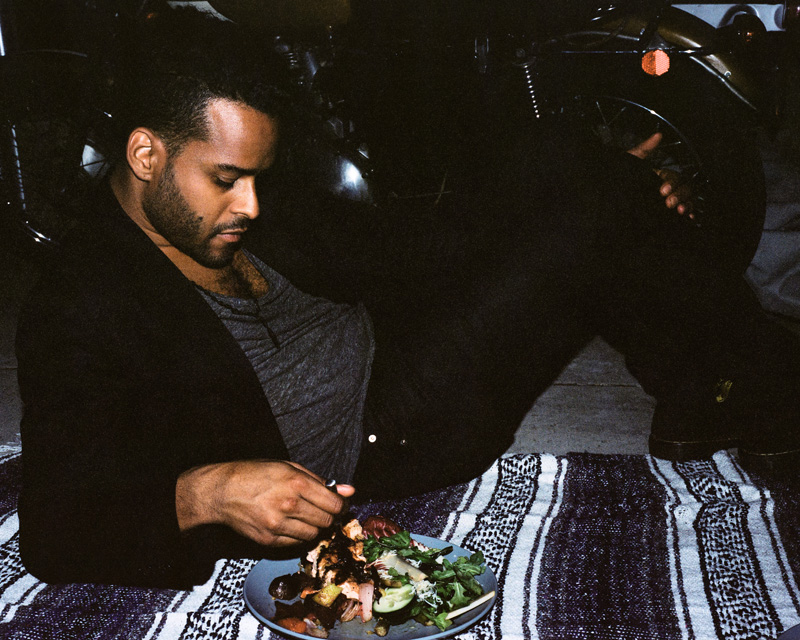 â€œI hate following recipes, and I hate measuring anything,â€ says George Lewis Jr., the singer/multi-instrumentalist behind the prismatic indie pop songs of Twin Shadow. â€œIt’s not because I’m lazy; its because I believe if you make the same dish three nights in a row and you don’t follow a recipe, you can have a new experience each time.â€

To punctuate his point, Lewis invited us over to his L.A. apartment and cooked his loose interpretation of butter-brushed, lemon-spiked salmon and roasted root vegetables, drizzled with a modest dose of delicately reduced balsamic vinegar. Since there’s no clear step-by-step breakdown to this meal, we discussed every last detail in a follow-up interview below:

Can you give us some background on this recipe?
I hated root vegetables for the longest time, but it was really about the preparation and how it was served. I went over to my sister’s place when she lived in Brooklyn and she made this root vegetable medley. I didn’t really think about it; I just started eating it. I’ve been obsessed with root vegetables ever since.

For this recipe, I used yams, beets, sweet potatoes, carrots, onions, and on top of that, I put cilantro, garlic, a little bit of aged balsamic vinegar and a ton of really good olive oil. You put it in foil and fold up the sides. That way the oil cooks the vegetables evenly, and they get a crispy outside while retaining a softer inside.

How much olive oil did you use?
The olive oil is more than a drizzle; it’s a heavy pour.

And how did you prepare the vegetables?
I like leaving the skin on my root vegetables. It’s like having really good french fries. So I try to cut off the bits of potato that are caked with dirt, although some of that earthiness ends up tasting really great when you cook something. I don’t like chopping everything super evenly, either. It makes for a more interesting experience when you eat it.

And how long do you cook the vegetables, and at what temperature?
I think all men go straight for 450 degrees or so, no matter what they’re cooking. I do that for about 30 minutes, then flip them really quick, turn off the heat and let them cook for about 10 minutes more. Sometimes you have to top the vegetables with more tin foil so the water keeps circulating around. That way they’re not just potato chips.

So that covers the root vegetables. How did you cook the salmon?
I get a cast iron skillet really, really hot and while I’m doing that, I make a balsamic reduction on the side. That’s a huge plus when you have a date–when you can make any kind of reduction.

That word intimidates a lot of people, but it’s really easy to do right?
It’s the easiest thing in the world, yeah. You’re doing exactly what the word suggests: reducing a liquid down to a paste or syrup-like consistency with heat and mixing. Balsamic reductions are probably the easiest. The important thing is using good, aged balsamic vinegar. For this particular recipe, I think I got a 14-year-old one.

About how much money should someone spend on vinegar?
Well, you don’t want to use Progresso. You want something that’s been aged at least five to eight years–something that’ll cost close to $20 for an 8 oz. bottle and will last you a while.

Do you have a preferred olive oil?
There’s a Trader Joe’s by me and they have a lot of different kinds, so I’ve been experimenting with that. I don’t like any particular [brand], just really dark, extra virgin olive oil.

Why is that?
It’s just got a really strong scent, which I like to mix into the food. It brings a slight bitterness to it. What’s the easiest way of explaining the balsamic reduction?
I fill the bottom of a small saucepan, and then add about half that amount in brown sugar. Put the heat up really high, until it starts to boil, and then bring the temperature down so the vinegar steams off. Then bring the heat back up and down again. You just keep mixing it and watching it until you get this frothiness. Then turn the heat up one more time, mix it all together and turn it off completely. That should burn off any excess liquid and leave you with almost like a chocolate sauce-like consistency.

You want to time it right, too, so that it’s finishing right alongside the salmon. That’s the hard part of the reduction–you can overdo it really easily. If you move past that sweet spot, you’re kinda fucked.

So what’s the deal with the salmon then?
Salmon’s the perfect fish because it has its own flavor. You don’t really have to do much with it. What I like to do is squeeze half a lemon over the salmon, and then I cut the other half into really thin circles, laying it all on top of the salmon.

And do you put any oil in the skillet before you start heating it up?
I don’t use oil; I put a pat of butter on the bottom. That way if you eat the skin of the fish, it tastes a little less fishy. So anyway, I start cooking the salmon and cover it with a plate. That way it cooks fast and evenly. It’s super easy to overdo, and salmon tastes pretty good raw, so you don’t have to cook it too much. It’s a lot like a good steak. Depending on the thickness of the salmon, it can take anywhere from five to 10 minutes.

Do you flip it at all?
Not usually. So once the salmon and root vegetables are done, you drizzle the balsamic over everything. Not coat or brush–drizzle. Very lightly, too, because the reduction is very sweet. You want it there as an after thought.

Have you made this recipe for a lot of people? And if so, did you fuck it up the first few times?
You know, I’ve been lucky with most of my culinary adventures, although one time I tried to bake an apple pie from scratch and I really fucked it up. Cooking is definitely a huge part of courting someone. I think it really does work. The funny thing about it is that I cook like I’m on a date even when I’m cooking for myself. I will garnish my own plate with a few leaves of mint by myself, every single night. I always tell my friends they can come over any night; it’s always a restaurant in my house. It clears your head too, right? Almost like riding your bike?
It’s even better in terms of that because with a motorcycle, there’s clearing your head and then there’s watching out for all of the other idiots on the road. Other than giving yourself salmonella poisoning, cooking is pretty easy. My family is all cooks, so I grew up having some pretty serious meals. The thing I’m the worst at is making Dominican food, actually. It’s really hard to do.

Why is that?
It’s a soul thing, man. It’s a special thing not a lot of people do right.

Is your mom good at it then?
She’s good, but not as good as some of her sisters.

Is there a particular dish she excels at?
There’s a thing called pollo asado that she really kills. That one’s all about timing; you cook the chicken for ever and ever, and it’s just amazing. Her sisters are great though. I don’t eat pig, but when I go over [to the Dominican Republic] I have to try the pig they make because it’s amazing. They don’t do it on a spit over a fire, but the skin turns to glass basically. It’s unbelievable.

And does your dad cook too?
He does. He’s like the breakfast guy. He makes really serious baked eggs in the morning. Every time I eat with my family it looks like a King Henry feast. It’s really decadent. Breakfast isn’t just breakfast. You definitely need a two-hour nap afterwards.

Do your sisters all have their own specialties?
Now that I think about it, my twin sister doesn’t cook much. She’s the exception, but my middle sister Isabel is more of an American, hearty cook. She’ll find some quail or venison, then make these woodsman-type jams with it. My sister Sarah has got the European stuff down, the kind of smorgasbord, European breakfast with several cheeses, lots of fruit, and different kinds of bread.

So she’s better at buying good food then?
Right, but she’s great at preparation. People don’t realize how important that is. It’s the same way with music–if you have a great band but look like a bunch of slobs onstage, there’s only so far you can go. Presentation is 50-percent of it, and she’s really good at that.

Have you always been into cooking–even back when you were in your punk rock phase–or is it something you got more into when you were in your 20s?
It’s just like me and fashion. I’ve always been interested in it, but during that [punk rock period] I tried eating out of dumpsters and 12-day-old bagels that we’d picked up at the end of the night. In my heart, though, I was hurting. When my friends were living that way, I was just trying to fit in. During one of my first dates with this punk rock girl in Boston, we dumpster dived for this mushroom pizza. I was pretty horrified, but I went along with it. Even then, I knew how to cook; I was just pretending that it wasn’t important to me.

Is there one holiday a year where your family makes sure to get together in the Dominican Republic?
We try to do Christmas, but that’s literally the only time we see each other these days. But yeah, Christmas usually happens and it’s always pretty epic.

Is there one dish you look forward to then?
My mom just turned me onto this lentil soup. I was a hater of lentils forever and ever, but she came to Los Angeles near the end of the recording and she made this insane lentil soup. I’m not sure it’s legal, but I kinda want her to send me some Tupperware of it.

Twin Shadow’s new album, ‘Confess’, is available now through 4AD. Here are some videos from him…