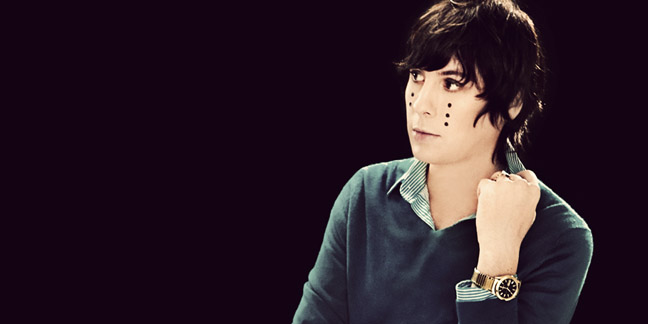 Chromatics have leaked yet another video from their new Kill For Love album, leaving many fans wondering when the damn thing’s going to actually come out. Well, we’ve got some good news for you: it’s in the final stages of mastering and should be ready later this month. As it turns out, self-titled recently spoke to Italians Do It Better’s in-house producer, Johnny Jewel, for our next magazine issue, and he had a lot to say about not only Chromatics, but Glass Candy’s next record (Body Work) and the long-awaited second installment of IDIB’s popular After Dark compilation.

Check out a lengthy excerpt from our interview below–we spoke for nearly two hours and ended up with a 10,000-word transcript–along with the first four singles from Kill For Love. Interested in reading more? Subscribe to self-titled here and get our new issue (featuring Grimes, Schoolboy Q, Optimo, Perfume Genius, Julia Holter and many, many more) delivered to your inbox the second our fully enhanced edition is ready in late March…

Some of the records you’re putting out this year were first promised as early as 2009. Have you scrapped a lot of songs in the interim because you’re a bit of a perfectionist?
The songs haven’t been scrapped. If anything, there’s too many of them, so they have to be put into groups alongside different production voices. And once I find the proper context of a song, it has to fit the overall idea of the album. Everything has to be a cog in the wheel, serving the ultimate purpose of the record. That’s what takes so long. Like Body Work has 45 tracks that need to be narrowed down to 15. And Kill For Love was narrowed down from 36 tracks to 17.

It’s not even about what’s the best song, or finding the one single and wrapping the rest of the record around that. I often put things that’re hot on hold, like â€œInto the Blackâ€ was recorded in 2009 and we just released it now. I’ve been sitting on it this whole time because we needed to find other songs that’d go with it. That song has a lot of meanings already, but in a literal sense for Chromatics, it’s the first song we recorded after the buzz for Night Drive. In 2008, I was already seeing how the indie world and the electronic world was going to become more prevalent. So I wanted to bring it back to an album opener that says, â€˜Rock â€˜n’ roll can never die.’ Because everyone‘s using synths now. I was so tempted to put it out as a single two years ago because that song’s so awesome. I think it’s my favorite vocal take of Ruth’s. Until yesterday, no one in the band had a copy of the song. I wouldn’t let anyone have it because I was so paranoid someone would put it out.

You don’t let Mike [Simonetti] from the label hear anything until it’s out either, right?
Right. I’m really paranoid that way. It’s no disrespect to Mike; I’m just really protective of my stuff. I used to love sharing demos on MySpace, but as we reached a wider audience outside our core fans, I noticed that my conceptual leaps were being misconstrued as proper follow-up tracks. So I stopped sharing them until they were ready to come out. It drives booking agents and publications crazy because I don’t give preferential treatment to the press. It’s funny–people think the Chromatics record is never going to come out because no one has advance copies of it, but it’s done. I’m just not going to let anyone hear it. [Laughs] I’d rather everyone hear the songs in sequential order when it’s ready. Like â€œInto the Blackâ€ is very guitar-oriented, and I love leaving people wondering whether the entire record is going to be folk-y like that.

I love how subtle that cover song is. A lot of electronic producers would put a big beat behind it, but you left it pretty spare.
That was the essence of the song for me, because we’re producers but we’re also songwriters. Chromatics may be on the cutting edge tonally sometimes, but we’re such a traditional group in the classic sense of Joy Division or the Velvet Underground. Glass Candy is much more experimental. There will be plenty of disco beats on the Chromatics album, but I wanted to cleanse the palette first.

You mentioned that the Chromatics and Glass Candy albums both work as a total package. Can you tell us anything about how that package might look and sound?
Glass Candy is harder, and more aggressive, than Beat Box. That’s the main difference.

What do you mean by that? Like a more refined way of how aggressive and no-wave-y Glass Candy sounded in the beginning?
That had more to do with us not knowing how to record or play, yet wanting to do everything ourselves. We definitely struggled with what we were trying to accomplish. I would say the new album is aggressive compared to the last album. It’s more like [the Beat Box song] â€œCandy Castleâ€ on steroids. Ida’s never going to rap, but the beats are more like hip-hop–wilder, bouncing around from harder electro stuff. Well, what I’d consider hard. It’s not like…

Not like what’s popular in the clubs right now–music that bashes you over the head a bit?
Right. There’s some elegant moments on the record, but most of it is pretty hard compared to how soft something like â€œComputer Loveâ€ is. The keyboards have some bite and buzz to them, too, and there’s some sample-based stuff that’s really grimy. You have to remember that it took me five years to complete [Chromatics’ last album] Night Drive and Beat Box. It’s just that no one was paying attention then. Now everyone’s watching, thinking, â€˜He sure is taking a lot of time with this.’ Real songs with actual shelf lives aren’t rushed.

As for how the Chromatics record sounds compared to Night Drive, it’s more pop–leaner and more abbreviated, with the experimental moments being more extreme, stretched out and vacant.

How has Ida evolved as a singer? Is she more comfortable with writing her own melodies now?
She’s still insecure. We’re all self-taught, so none of us know what the hell we’re doing. She’s definitely exploring melody more, though, like in â€œWarm In the Winterâ€ and â€œBeautiful Object.â€ There’s also some spoken word on Body Work, like this awesome song called â€œBringer of the Dawnâ€ that’s her having a conversation with an ATM machine. That was the first song I recorded when I moved to Montreal three years ago.

And these aren’t interludes either, right? They’re entire songs built around spoken word?
Yeah, it’s like five minutes of poetry.

That’s pretty ballsy.
Trust me, I know. It’s going to be a love or hate thing, and I don’t really care. I love it. And then there’s an interlude track where she’s talking over a beat like that DJ in The Warriors, like a traditional hip-hop narrator in Fear of a Black Planet or Midnight Marauders.

Has the new Glass Candy album reached a point where you’ve stopped recording new tracks and are focusing on figuring out the sequencing and mixing?
Yeah, sequencing and designing, finding the right wrapping paper for the songs. We’re not adding any more tracks, that’s for sure. I’m hoping that’ll be out by the end of May, right around my birthday. But if it’s not ready, whatever. People can chill out. That’s one thing about the computer world–people feel so pressured to put their music out that it becomes watered down. You need to let your art marinate, you know? One of the reasons I have my own record label is that I don’t like deadlines.

The most important thing is that there’s no filler. It’s all quality. I’m so proud of that. Not a lot of people can say that about their record label or their own releases.

So is the second After Dark compilation material that isn’t already out on singles? The last one had a lot of demos on it, too.
It had that, and a lot of 12-inches. This one’s the same way. After Dark should be out in early April, late March. For some reason, I thought the Chromatics album had to come out first. It just felt right, so I’ve been kinda sitting on it. All of the tracks are there; it just needs to be mixed. I’m also trying to decide if I want to make it a double disc because we have enough music to do that. I think it’s going to be a single like the last one, though.

And you produced everything that’s on it?
Yeah, there’s only one beat on it that I didn’t write, but I’m mixing and doing post-production on it. One of the concepts is that every track shares the same kick drum. I’m not sure if that’s possible in the end but we’ll see. But yeah, I’m producing the Mirage stuff, there’s new Farah, new Desire, new Glass Candy, new Chromatics, but also singles like â€œWarm In the Winterâ€ and â€œKill For Love.â€ It’s a label sampler, not all this crazy shit you’ve never heard before.

If all goes well, are you trying to do any other records this year?
Yeah, we already have 23 songs for the Farah album that we started in November of 2008. Desire has a bunch of material, but I have to be in the right mood for Desire, and I haven’t felt like doing it yet. After Dark has three new singles, though, which is a lot. I don’t see myself doing a Desire record until the fall at the very earliest, though. There’s been such a resurgence in the old stuff that I’m letting that breathe and we’re doing some shows again.

You just put out a video, too.
Yeah, of a song that’s almost three years old. Because of [the movie] Drive and the Cudi thing, it’s like Desire’s suddenly a new band. The album’s in the Top 50 of iTunes’ Electronic section, which is insane because nobody cared about it when it came out.

It was really overlooked, yeah.
I was really shocked because I was really proud of it, but it came out at a time when everyone wanted a new Chromatics record. It’s like some people felt like they were being forced to choose between Chromatics and Desire because we share members, but it wasn’t that way at all. We just needed to regroup and figure out how we were going to tour because Ruth is such a fragile singer. It’s not like rocking a party with Glass Candy. Europe understood Desire, but it’s almost like it wasn’t oblique enough for critics here. It’s playful, it’s melodic, it’s cute, it’s love songs. And I think it’s difficult for American audiences to see the weight in that sometimes. But yeah, it’s weird that it’s getting this mainstream audience now. The â€œUnder Your Spellâ€ thing we didn’t even make on YouTube had three million views. Think about that; all of the videos we’ve ever made don’t even add up to a third of that. It’s absurd.