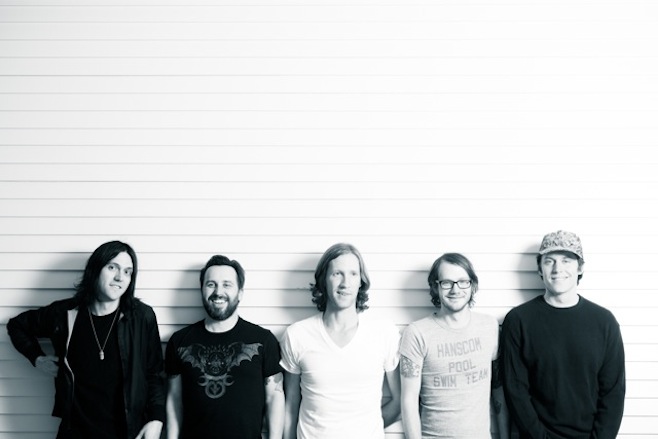 [Pitchfork] Say what you will about Conor Oberst’s work with Bright Eyes. It does nothing to diminish the scorched riffs and vicious vocal spasms 0f Desaparecidos and its long-overlooked LP, 2002’s Read Music/Speak Spanish. A disasterpiece of middle class malaise,  money hungry fat cats, and street-swallowing chain stores, it captures Oberst’s prickly politics better than any Bright Eyes album ever could.

With that in mind, we’re happy to report that the band’s back for their first tour in a decade and a new 7” called “MariKKKopa” b/w “Backsell,” which drops tonight at midnight…

“We’re all such old friends and it was cool to see that hadn’t changed despite the time apart,” Oberst told the Huffington Post, referring to Desaparecidos’ reunion at Omaha’s Concert For Equality in 2010. “The show went great and we all agreed we should play together again as soon as schedules allowed. So, this past spring we were able to get together, and even though we had no expectations except to have some fun, we ended up writing new material, recording and playing a small show in Omaha. We also decided to book more shows for later in the year. It’s been very casual and enjoyable thus far.”

Casual but caustic, as “MariKKKopa” tackles Arizona’s crusade against undocumented immigrants and “Backsell” subtly references Britt Daniel’s own struggles with Spoon while taking pot shots at tone deaf major labels. Stream the A-side up above, and sample the flip over at Alternative Press. We also made sure to embed a Spotify-powered stream of the group’s entire debut below their tour dates for those of you who are unfamiliar…

* with Little Brazil
^ with the Velvet Teen
% with Virgin Islands