LONG PLAYER OF THE DAY: Death Grips, ‘The Money Store’ 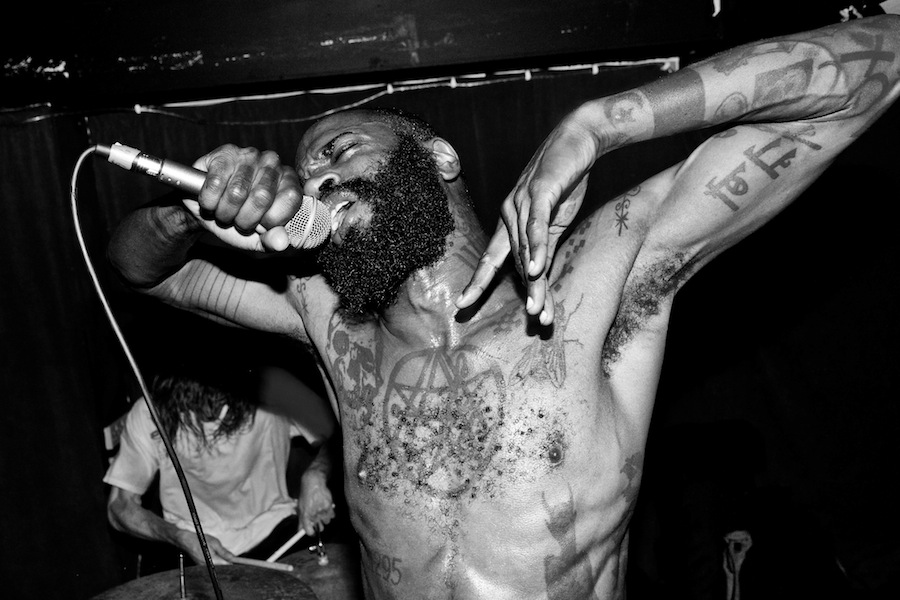 Our Review: We’ve faced our fair share of divisive albums at self-titled, but few have sparked as many animated debates as The Money Store. The first of two Death Grips full-lengths set to drop this year, it’s the very definition of a love or loathe LP, announcing its arrival as soon as the opening track–the relatively restrained “Get Got”–bleeds into the sonar blips and shotgun blasts of “The Fever (Aye Aye).” If you want a quick synopsis of Death Grips’ sound, it’s here: caught in the wreckage between shrapnel-spouting samples and syllable-spitting non sequiturs like “Know what I’m saying? Fuck it!”

Call it ‘punk rap’ if you must–Epic’s CEO, L.A. Reid, reportedly thinks they’re ‘the next Rage Against the Machine’–although that tag can be easily misconstrued as a backhanded insult, a music critic construct that’s one think piece away from saying Death Grips are nothing but the second coming of Linkin Park. And, well, we’re pretty sure Linkin Park would never plaster one of their record sleeves with “an androgynous masochist on the leash of a feminist sadist who’s smoking,” explaining the cover as follows…

We consider ourselves feminists, we fiercely support homosexuality, transparent world leadership, and the idea of embracing yourself as an individual in any shape or form. Acceleration is a mantra, we’re not a political band, we are freaks and outsiders. It was important to project that message and energy through the artwork of this album. This is free thinking and eternally open-ended music: [The cover] is like an ambassador to the sound.

There’s a couple key lines in there–namely, “we’re not a political band, we are freaks and outsiders,” and “[the cover] is like an ambassador to the sound.” Take The Money Store for a couple spins and you’ll see what we mean as you succumb to their sadomasochistic songwriting–records that’re engineered to spark riots, a lyrical flow that feels like a madman screaming at you for 40 minutes–or hit stop halfway through, repulsed by just how ugly it can be. True to their mission statement, it’s as if Death Grips decided to keep their politics to themselves, and plow through a sonic simulacrum of how fucked everything is instead. Underground punk and hip-hop both have their place in that mix, but so does the harsher end of the electronic/pop spectrum, as evidenced–loudly–in the speed freak chorus of “Hustle Bones,” the roughhouse riffs of “I’ve Seen Footage,” and the lead-pipe loops of “System Blower.”

Which may be why many Death Grips fans–in our limited polling, at least–also happen to be former hardcore kids, the kind of people who spent their teenage years glued to a half pipe and a boombox that blasted Public Enemy, Slayer and SoCal standards like Social Distortion, Suicidal Tendencies and Black Flag. While Odd Future are skaters who happen to make hip-hop, Death Grips have stumbled upon an aesthetic that screams broken bones and skinned knees.

Beats and rhymes with a blunt trauma bent, yes, but you can rest assured that the band’s drummer/co-producer (Zach Hill of Hella and countless side projects that never quite achieved the overt promise of this one) hasn’t gone all Judgment Night on us. With another pin-pulling producer in tow (Andy Morin), and Stefan Burnett spraying the front lines with whatever comes to mind first, there’s enough meaty hooks on here to leave you wondering what the hell just happened every single time. Like it or not, this is music that makes us all feel something. Hatred. Exhilaration. Or a mercurial mix of the two. Either way, music in 2012 rarely gets as exciting as this, whether that means you want to throw a T.V. out your window after hearing it–in solidarity to the spirit of the songs–or you simply want to never, ever hear that…fucking…racket again.