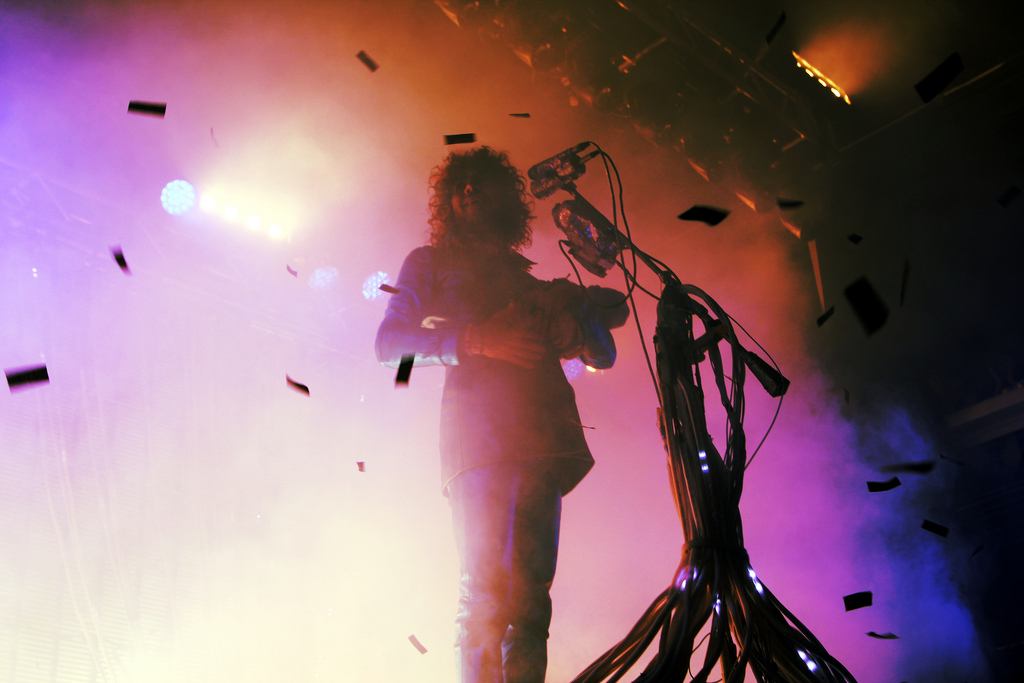 If you can look past the confetti canons, human-sized hamster wheels and Wayne Coyne’s healthy libido, The Flaming Lips have revolved around three things since their drug-damaged start in the early ’80s: death, lust and love. The circle of life, essentially. That was especially the case last night, as Oklahoma’s favorite sons landed their self-made spaceship within the hangar-like environs of Terminal 5 and settled into an uneasy groove that alternated between synth-laced lulls of abject sadness and beatific peaks of psych-steeped harmonies and hover state hooks that sounded like they were beamed from the space station in Christmas on Mars.

Endorphin-flooding fan favorites like “Race For the Prize,” “Do You Realize??” and “A Spoonful Weighs a Ton” were noticeably affected by the sombre mood, as their tempos were ground to a halt and Coyne’s fragile inner dialogue was forced to the fore. It’s hard to feel the reality check rush of hope against hope in the lines “do you realize/ that everyone you know/ someday will die” when they’re delivered with a fluttering falsetto in a subtle acoustic setting, you know?

And yet, the human condition wins out in the end more often than not in Flaming Lips songs, including their retina-ravaging renditions last night, whether we’re reminded of scientists who fight tooth-and-nail “for the cure of all mankind” or are left with a stuttering “love…love…love…love” sample right before the band’s encore. The message they seem to be leaving us with is simple: If society’s as fucked as it appears to be, at least we have each other.

Tame Impala were far less melodramatic in the support slot, relishing their co-headliner role with dated but fitting planetarium visuals and a thorough run through of their two lava lamp-trapped LPs, Lonerism and InnerSpeaker. It’s no wonder why the Flaming Lips have made the young Australians their latest hand-selected tour mates; in many ways, their freewheeling riffs and flower-powered melodies recall the records Coyne and company grew up with, from the Beatles to far more sinister slabs of classic rock and psych. Theirs is a jam band you can feel good about. The Flaming Lips @ Terminal 5:
Look…The Sun Is Rising
The Terror
The W.A.N.D.
Silver Trembling Hands
Race for the Prize
Try to Explain
All We Have Is Now
Butterfly, How Long It Takes to Die
Turning Violent
A Spoonful Weighs a Ton

Encore:
Do You Realize?? Tame Impala @ Terminal 5:
Why Won’t You Make Up Your Mind?
Solitude Is Bliss
Endors Toi
Apocalypse Dreams
Half Full Glass of Wine
Elephant
Music to Walk Home By
Be Above It
Feels Like We Only Go Backwards
Mind Mischief
Oscilly
Desire Be Desire Go
Nothing that Has Happened So Far Has Been Anything We Could Control Check out another set of photos at our Facebook page here.