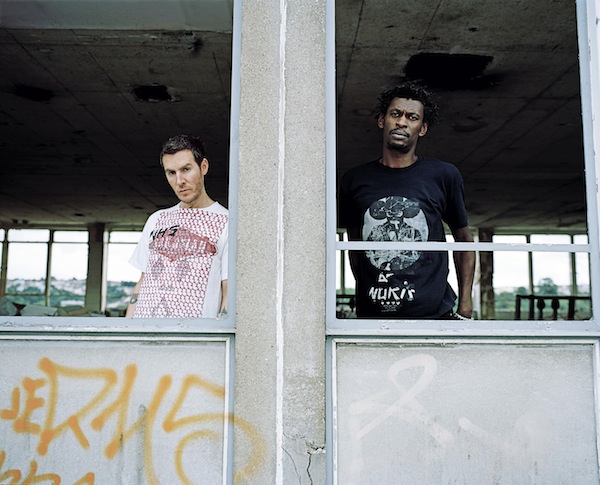 Blue Lines–Massive Attack‘s debut album, and one of trip-hop’s first blunted blueprints–turns 20 next year (20!), which got us thinking: why don’t we ask the group’s one consistent member, Robert “3D” Del Naja, to talk about their entire back catalog? A lovely idea until we got the guy talking…and only made it as far as Mezzanine.

Good thing Massive Attack’s first three full-lengths are all essential listens in their own right, starting with… Blue Lines (Virgin, 1991)
Like many people say about their first album, this was a strange amalgamation of everything that came before it. The definition of Blue Lines would probably be two parts, really. One would be Bristol, the Wild Bunch and the environment we discovered music in–the UK in the ’80s. That created a political environment for us. Being a part of a small, integrated multi-ethnic community, the clubs we’d hang out in played everything from punk to soul to reggae.

The history of that particular period for us was the punk thing, which sort of dissolved, and new wave became a sort of alternative to the mainstream. And then out of that, electronic music started happening in the background.

I suppose Malcolm McLaren’s recent death highlighted what a strange and great time that was. Between him and John Lydon…obviously the Sex Pistols were a major influence on British culture back then. Even indirectly with the black youth as well–not so much the sense of personal rebellion as the energy injected into the music. And then Lydon applied the dub format of recording music to PiL–seven to eight minutes of experimental keyboards, bass and drums.

“There’s always been a bit of a scene here. The difference now is that everyone has access to all sorts of music.”

The mainstream had never seen anything like hip hop up until that point, either, whether it was breakdancing, rapping or scratching. So that environment is very much what created Blue Lines. Hip hop defined the way we worked. Back then, if you wanted to be in a band, someone had to have a bit of money to buy all of the gear and equipment, even if it was only a punk band. So hip hop gave us the opportunity to throw shows and create music in a rudimentary, independent way. We didn’t need a garage or a studio to get started, you know?

The Wild Bunch thing was a very bizarre combination of people. Massive Attack carried on that theme by being unconventional, from the sound system onwards. Since we didn’t see ourselves as a band, we wanted to work with as many people as possible. Everything we liked, from hip hop to reggae, was like that. There’d be a lot of different grooves, but it wouldn’t be about one person. You reached as far as you wanted.

It’d be very different if it happened now, although Bristol’s kinda come around full circle. The clubs are strong again. There’s always been a bit of a scene here. The difference now is that everyone has access to all sorts of music–everyone’s educated. Protection (Virgin, 1994)
Protection was defined by working with Nellee Hooper in London–that change of environment from Bristol, and being able to work at a studio in his house…Nellee came from a [head space] where he’d left Bristol, set up Soul II Soul and had some massive success with that. So he was a well-known producer nationally, especially after he’d done BjÃ¶rk’s Debut album and some work with [film director] Baz Luhrmann.

We felt a little fragmented after Blue Lines. Tricky was doing his record, our manager [and Blue Lines co-producer] Cameron [McVey] wasn’t around…and with us living at Nellee’s house and hanging out in London, a lot of crazy ideas were floating around. Like at one point, he wanted Naomi Campbell to come in and do some vocals. We had no idea how that’d work.

So that was a major difference–Blue Lines came from this raw scene and was all about recapturing a sense of history–people like [reggae singer] Horace Andy. That’s very different from the sort of glamorous world Nellee came from, you know? He came from Bristol like us, but he’d lived in London for 10 years by the time we recorded Protection. We were still relatively green, so it was wild meeting people like [INXS frontman] Michael Hutchence, Damon from Blur, and Liam and Noel from Oasis. I guess we were right in the middle of the Brit-pop thing then as well, so there were lots of happening gigs all the time.

Nellee also introduced us to Madonna and we did that song “I Want You” for the Marvin Gaye tribute album [Inner City Blues]. All of this gave us a reputation suddenly, and access to all sorts of new artists. It was also a very hedonistic time, which was very different than Blue Lines for me. A lot of Blue Lines was recorded in an isolated environment, and didn’t involve going to parties in London every week. Mezzanine (Virgin, 1998)
Four years had passed between this album and our last. The whole experience of doing [Protection] with Nellee in London had been slightly tense. For me and Grant [“Daddy G” Marshall], we knew Nellee’s personality and got quite used to that dynamic. I think it was much more difficult for Mushroom because he knew Nellee from the Wild Bunch days, but he never got used to what it’s like working with him.

There was definitely some friction there, between all of us, because it was a bit of the past and the present colliding. So while I enjoyed the experience of being in London, I was never particularly happy with [Protection]. I thought it didn’t represent what I was into–my background of being into reggae, punk and hip hop. While the record had some hip-hop [elements], the combination of soul and electronic music didn’t have the energy I was looking for outside of a couple tracks. So I was looking to do something different [with Mezzanine].

“It was really quite bizarre because I didn’t intend for it to be that way.”

[Producer] Neil Davidge and I had gotten along working on a track for the War Child album (the Brian Eno collaboration “Fake the Aroma”), so we went into the studio and started working on what became Mezzanine. As you know, there were a lot of battles with what direction that went in. (Mushroom left in late 1999 after being told the group wouldn’t go on with him.)

There were definitely some interesting samples on Mezzanine. Like I adored the [Cure] song “10:15 Saturday Night” growing up. (It’s sampled on “Man Next Door.”) It literally got me in the mood to go out, you know what I mean?  [Laughs] We also messed with the Velvets (“I Found a Reason”) on “Risingson.” It was really quite bizarre because I didn’t intend for it to be that way. It was just a case of jamming two things together and them ending up taking on a new sound.

Mezzanine was really a case of tearing through my record collection–everything from Gang of Four to Wire. And there was so much stuff we didn’t even use at the time. Just lots of tracks from my youth, ’77 to 1980. Anyway, that’s the third album!

Massive Attack’s latest album, Heligoland, is available now. If money is no object, this limited triple LP edition is kinda amazing. The group can also be found on tour in the coming weeks, including two stops at New York’s Terminal 5 tonight and tomorrow. For more info on all of the above, check out Massiveattack.com.