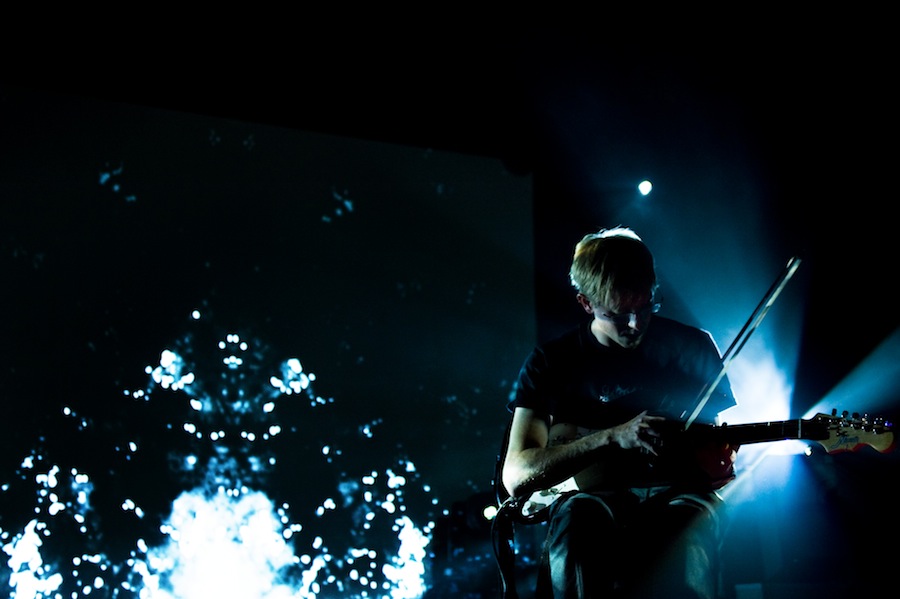 One of our favorite, and most popular, Needle Exchange mixes in recent memory was a bleak but strangely beautiful ambient entry from Erik K. Skodvin, better known as one-half of Deaf Center and the guy behind Miasmah Recordings and Svarte Greiner. Skodvin will don that very guise at Brooklyn’s BAM Rose Cinemas next Monday night, as the multi-instrumentalist performs a live Nosferatu score alongside percussionist Paul Wirkus. In related Unsound Festival news, he’ll also appear with Deaf Center at the Judson Memorial Church next Thursday, as the pair sets the stage for the music of Polish composer Henryk Górecki.

With that in mind, we asked the Norwegian noisemaker to discuss five of his favorite horror films, from the black comedy of Evil Dead II to the “true undefinable horror” of a sorely overlooked David Lynch series….

THE SHINING (1980)
The Shining is the ultimate horror film, and pretty much the ultimate film for me in general. I could see it over and over again endlessly without tiring of it. Seems like just about everything comes together to make a masterpiece of cinema art. Favorite scene is the drive up to the hotel early in the film. The use of music and perspective is harrowingly chilling.

EVENT HORIZON (1997)
I randomly found this in the video store around when it came out, as it never got a cinema screening. The cover and plot seemed so tempting, I just had to rent it. Such great horror/sci-fi with incredibly dense atmospheric soundscapes and some really horrifying scenes. Not to mention a great Sam Neil in one incredibly evil role. Maybe it was best viewed on VHS back in the day and has lost some of its horror when you see it again, finding out the CGI graphics aren’t totally up to date. Still it’s a total cult film worth seeing.

EVIL DEAD II (1987)
The funniest horror movie I’ve ever seen, with so many great lines and surreal situations. Also quite scary at times, but Bruce Campbell’s Ash role is just legendarily hilarious if you’re into dark comedy.

THE DESCENT (2005)
I know lots of people find this film very cheesy, but I still remember the first time I saw it, not knowing anything except that it came highly recommended from a fellow horror-buff. It has some of the same underlying tension as The Shining at the beginning of the film, with some really fantastic music by David Julyan (one of my favorite film composers). I also found the film very claustrophobic and darkly entertaining from start to finish. I guess the use of atmospherics and music is the main thing I’m looking for when searching for horror films, and this definitely got it.

RABBITS (2002)
Okay, this is not a film, but rather a short series by David Lynch from 2002. The IMDB description calls it a “plotless show about people in rabbit suits,” which is fairly spot on, I’d say, although it’s so surreal and moody I can’t help but be totally stunned by it. The first time I saw it I had to watch the whole series over and over again. (It’s about 50 minutes split over eight different episodes.) The foggy music by Angelo Badalamenti and the totally weird atmosphere is incredible, with the rabbits coming in and out of an “apartment” that’s just a stage with a couple lamps and a sofa. There they seemingly talk about random things with applause and laughter coming when you least expect it. Not to mention some episodes of Rebecca del Ria (from Mullholand Drive) singing about dark things and the really scary looking ‘leader’  that appears from time to time. Lynch at his best if you ask me. True undefinable horror.