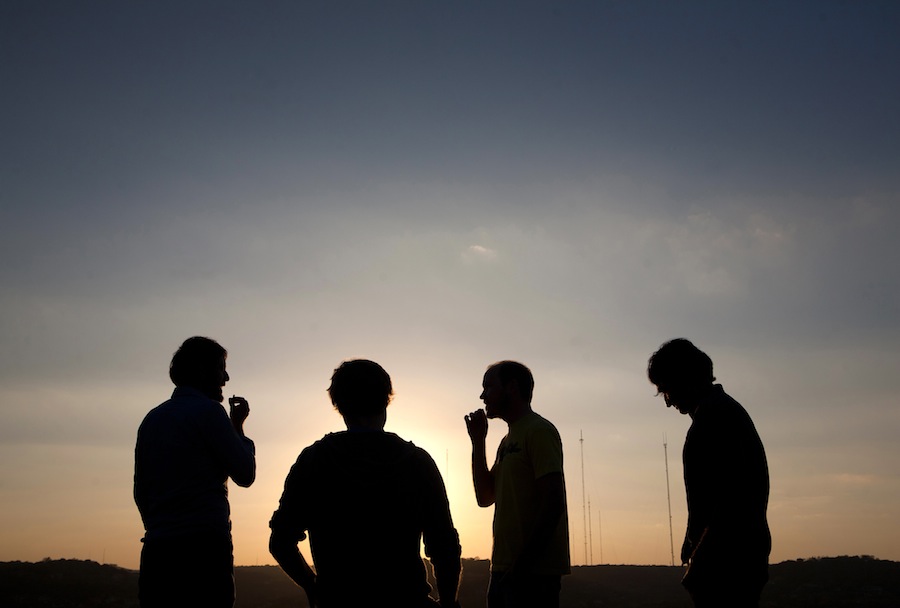 Recording Under the Influence is a recurring self-titled feature where we ask artists to ignore their most obvious musical inspirations for a minute and share what really went into the making of a particular record. Today’s piece revolves around Explosions in the Sky guitarist Mark Smith, who manages to make sense of their sixth album (Take Care, Take Care, Take Care) without spelling every instrumental passage out…

RECREATIONAL GAMING
First: ping-pong. We did an interview not too long ago in which there were at least three times that we said “I think we made up that song title while playing ping-pong” or “The idea of the artwork crystallized while we were playing ping-pong one day.” It’s a simple game; an amazing game. Our friends John and Susann have a ping pong table, and four times a year we hold tournaments. (Mirroring tennis’ major tournaments–Wimbledon, the U.S. Open, etc.) Anyway, it’s one of those things that we can just do, or sit around and watch others do, and chat and smoke and talk about music or artwork or what we’re going to do or whatever.

Secondly: NBA fantasy basketball. Three of us play this every year. Although “play” seems to understate it. I will just say… If the NBA has a lockout next season (as is very possible due to labor disputes), then we will probably have a next album MUCH sooner. (After writing this paragraph, I now realize that rather than inspiring the album, ping-pong simply facilitated it, and fantasy basketball downright impeded it. But I’ve already written the paragraph.)

PHISH’S CAREER PLAN
Please let me explain. I actually don’t like Phish at all. (Sorry Trey.) But somewhere along the way, I feel like our band began to resemble the career model that Phish enjoyed. Basically I mean that they are a band who their fans feel extremely strongly about, with an emphasis on their live shows, but maybe they weren’t, how shall I say, critical darlings. I kind of feel we have headed in the same direction. I am stunned and humbled and pleased and many other emotions when I open our band emails and see how our music has affected people. And there are still a beautiful amount of people who actually write us actual physical handwritten letters on paper and send them to our real-world P.O. Box. And it’s hard to generalize about album reviews and critical response, but I’ve read enough to know that there are certain criticisms about us that I seriously doubt we’ll ever shake. This all is very much a big surprise to me. After we released our first couple of records so many years ago, I figured we were absolutely destined to be the opposite–critically praised but limited by the kind of music we make. Oh well! Who can predict anything. Anyway, this is all a convoluted way of saying when we were writing this record, we had to just make the music that we love, that fulfilled us. And the fans, man.

DAVID FOSTER WALLACE
I loved this man (from afar), and I was devastated when I found out about his suicide. This is hard to put, but it just felt like here is probably the smartest guy I have ever been aware of, someone who immersed himself in so many subjects and trades and had a knowledge and enthusiasm about so many elements of life, and was just bursting at the seams to write all he could about it all. In short, here is someone who in fact seems full of life…and if he decided he couldn’t take it (the world), then what chance do the rest of us have? That tidy analysis, of course, skirts his depression and addictions, but even those were relatable. In the four years since our last record, all four of us have read his stuff and loved the hell out of it, from Infinite Jest to Roger Federer as Religious Experience and everything in between. And he just seemed like someone we would know, and made so many good points about so many things, that I find myself thinking about something he’s said on a nearly daily basis. So I can only assume a lot of that–his enthusiasm and love, as well as the darker stuff–went into this record.

THE SABBATICAL
I’m not good with chronology, but at some point in the writing of the record we weren’t getting anywhere and decided to impose a break on ourselves. I think it lasted about six weeks. It sounds easy in retrospect–take a few weeks off, refresh yourselves, find a new focus. At the time, though, it just felt real shitty. Probably the lowest point in our band history, lost and discouraged and down on ourselves. We still hung out, watched movies, watched basketball, ate pizza, but we didn’t talk about music or play any music. I won’t pretend to know how it worked–something about you don’t know what you got ’til it’s gone–but it somehow did have a very therapeutic result, and we were able to write the album after that. We all missed music terribly, and I hope we don’t have to repeat that any time soon.

SLEEP/MY FAMILY
I’ve never heard of this interview series before, but let me congratulate you on making an interview that is really fun. But it’s also impossible to pick just five influences, so I’m cheating and putting two in this paragraph….About 15 or 20 times during the course of writing this record, I would be in bed trying to go to sleep, and the song that we had been working on that day would be going through my head. And in my sleepy brain, connections would start connecting, and before I knew it there would be a new melody going around in my head. And if I just went to sleep, it would be gone. So I would have to get out of bed, fire up the computer, and record the melody. I’m sure it drives my wife crazy. But I probably wrote half of my parts for this record this way. And speaking of my family, I get more inspiration from my wife and kids than I do from everything else combined.