RECORDING UNDER THE INFLUENCE: Kylesa 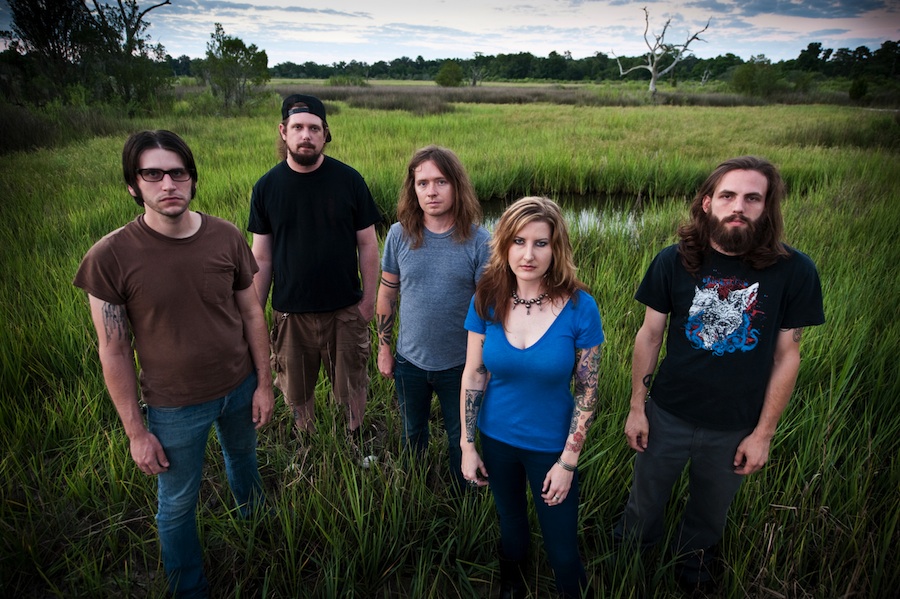 Recording Under the Influence is a recurring self-titled feature where we ask artists to ignore their musical inspirations for a minute and share what really went into the making of a particular record. The following missive is from Kylesa vocalist/guitarist Laura Pleasants, who explains some of the reasons why Spiral Shadow is the closest they’ve come to writing an indie rock record. A killer indie rock record, mind you; and one that completely lacks the crustiness they started chipping away at several albums ago. Maybe this is to blame: “the pipe, Project Runway and bacon”…

YouTube
This sort of falls into the music category, but I was mainly using YouTube to look up live performances by bands that have inspired me over the years. I wanted to see them at certain eras or peaks in their careers and how they took the stage. A lot can be said about how a band translates their music live and how they interact with the crowd. I looked up small intimate shows to large arena style shows–all of which were very inspiring and educational.

Smoking Pot
I don’t usually endorse drug use, but when I moved back to Savannah, GA, from North Carolina in January, I decided that I would start smoking pot again. I go through phases with this, and although I don’t consider myself a regular smoker, I smoked a lot when writing this record. I played guitar every day for three months and had a creative wave the whole time. Not that the greenery makes you creative, but it does often lift a filter and helps me go with perhaps my first instinct or riff inclination. That, and I find it very relaxing. There was a lot of stress behind this record in that (A) It had to be good as it was our fifth record, and (B) We didn’t have a lot of time to write it. I had to work fast, but I couldn’t get worked up about the pressures involved. So, I took bong hits and jammed with [drummer] Carl [McGinley] every day. We were very much on the same page and I floated through the riffs with ease.

Living With Amanda and Mike
When I moved back to Savannah, I moved in temporarily with my friends Amanda and Mike. They had an extra bedroom, and Amanda offered me the space a few months prior to my arrival. They were planning on buying a house and moving in April, which worked out fine for me as Kylesa was going to tour Europe in April. It was an unusually cold winter in Savannah but the house was very cozy and I loved the room they provided for me. They have two great dogs and the couple are known as “The Awesomes.” And that they are. I’ve known Amanda for a while but we really got to know each other while I was there (as I was not going out that much) and we fell into a pretty sweet routine of making breakfast together and having tea in the afternoons. She’s an amazing Southern cook and I was lucky enough to have dinner with them at least twice a week. We both enjoyed the pipe, Project Runway and bacon. These folks had a very positive impact on me while I was writing and were very supportive of my efforts. When writing or creating music or art, the environment you surround yourself with is vital. I felt welcome and comfortable in someone else’s home and I will be forever grateful for their kind hospitality.

Love and Heartbreak
Oh, the cliches of lyric writing. This was the first time I have ever written a song about a love affair or heartbreak. The feeling was so strong that I just couldn’t ignore it. My lyrics have always been on the abstract side as I generally like a more poetic and interpretive approach. However, one man absolutely consumed my thoughts for a while and I had to get him out of my mind and off my chest. I felt like I was going insane from the feelings I was having. The lyrics are very literal, linear, and to the point. â€œTo Forgetâ€ was the song I wrote for him and I even sent him the four-track demo of it first. He loved the song, although I’m not sure how much he’d love it now after reading the lyrics.

Family
Right after recording Static Tensions, I moved back to NC. I needed to get out of Savannah for many reasons and rethink my place in life. I spent the lovely month of October with my grandmother in the mountains and worked on editing and scanning negatives from the past 10 years. We had a great time together and I enjoyed watching the fall colors change–something I had not  witnessed in years since living in Savannah. In November, I went back to Greensboro where my mom lived and planned on spending some time with her there. Almost as soon as I got there, we found out that she had an advanced case of Ovarian cancer. I was with her through thick and thin for the next year. She had major complications with surgery and needed someone with her. So, I spent all of my time taking care of her and my elderly grandmother. Although the situation was terribly painful, the three of us really enjoyed our time together and it’s a time we will always remember. The pain that I witnessed my mother go through and the stages I saw her in while in and out of the hospital, left a dark mark. I wrote the song “Spiral Shadow” for her and a lot of my lyrics came from dealing with the dance of death with someone I love dearly.