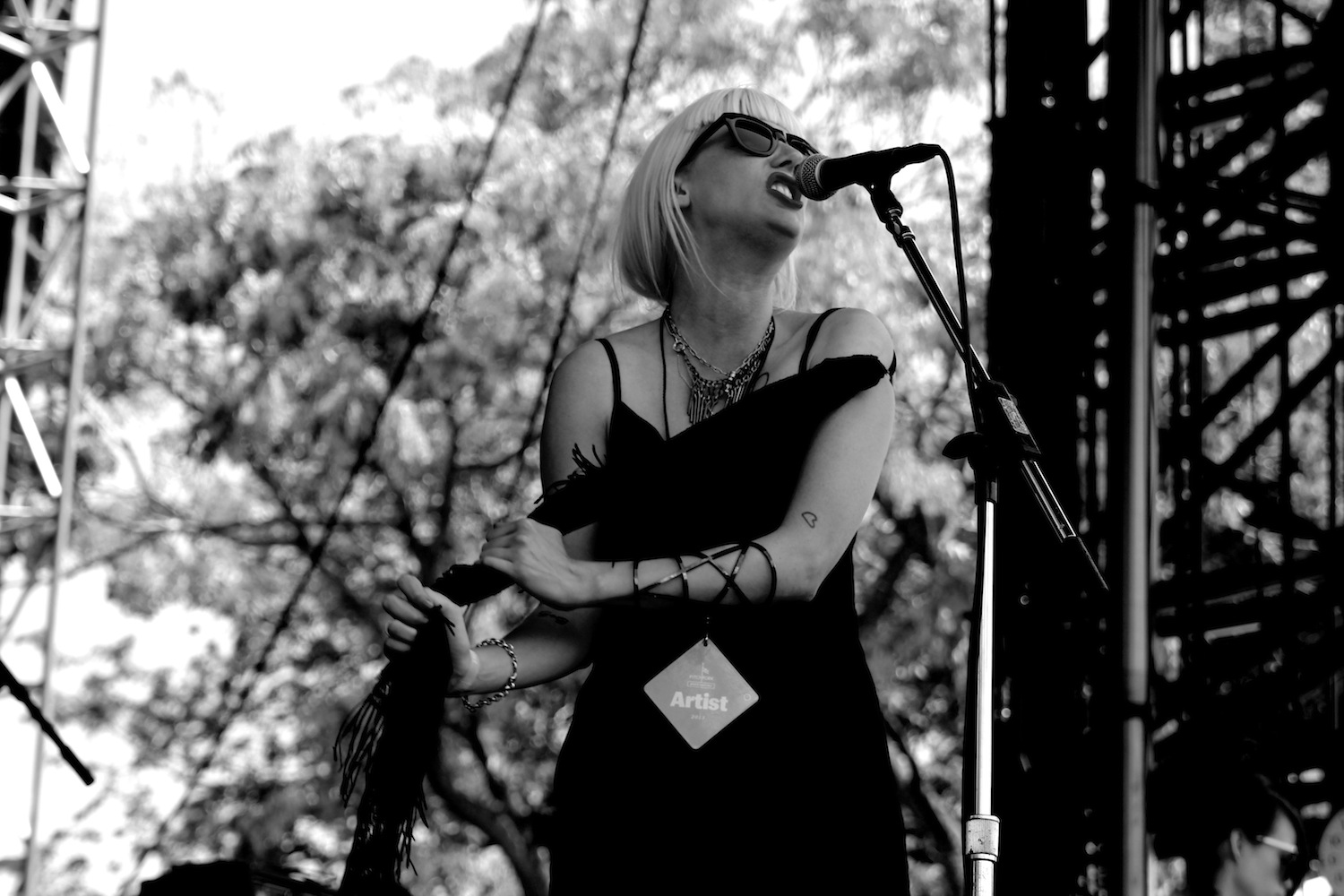 We dug Mish Way’s personal essay about figure skating so much we asked her to write the first Instagram-era tour diary that’s about more than sound checks and what her band—the rising punk act White Lung—ate last night. This is her first monthly entry… It was just me, Anne-Marie and the lizard named Lord sharing a room.

Brittany’s house was hot and sticky from the Chicago heat wave. In the spare bedroom, my drummer Anne-Marie and I dropped our bags on the bed and checked out our new roommate for the weekend: the lizard. Lord, the lizard, did not seem to mind that we were there. In fact, she was probably happy to have company seeing as she had just devoured her male companion two days earlier and now had the whole tank to herself. Brittany told us she had chewed his tail off and let him bleed to death.

“We got the lizards for free from our friend who was moving,” Brittany said, as my band crowded in the kitchen chugging water after our five-hour flight from the West Coast. “Bearded Dragon’s are like kid pets. You can dress them up in clothes and they just sit there. That’s why we wanted them.”

I laughed at the idea of Brittany dressing her lizards up like Anthony Keidis and Lindsay Lohan because that is something she would do.

Brittany’s boyfriend chimed in, “But Lord killed the other boy lizard a while ago and I don’t know…We are moving. We have to get rid of them.”

“You should take it on stage, Mish.” Brittany suggested, half-serious. “Take her on stage and chuck her into the audience.” She laughed. “I don’t care.”

“How insane would that be if I brought the lizard out on my shoulder for our set and then just whipped it into the crowd?” I imagined the lizard’s tiny, precious talons getting caught on my bra strap or it clamping onto a chunk of my hair and never letting go as I tried to throw it off me into a mosh pit of half-baked Chicago teenagers. I looked into the bedroom and saw Lord the Lizard motionless in her tank. Would the decibels on stage break her ear drums? Did lizards have ear drums? Lord had killed her male companion. She was tough.

“You can’t bring a lizard on stage and throw it into the audience at a major festival,” said my guitarist, Kenny. Then, he gave me a look that asked me if I was retarded without actually having to say it out loud.

Two weeks previous I was at a Fourth of July barbecue in New York City, shooting off text messages like bullets I would never be able to take back. I felt deflated, so I did what I always do: search for what I want in the past, hidden in the contact list of my phone. Scroll through until I find someone I fucked and try to see if they will do it again.

I knew I would be in Chicago next weekend playing a festival and there were two options: A and B. A was crazy and totally unpredictable, and sex with him was mentally exhausting; the thought of doing it again just made me crave cocaine and an easy way out. B was the lesser of two evils. We had fucked when our bands were on tour together. Sex with B was half-ass drunk sex. Honestly, I think he just got tired of me hitting on him and gave in. All I remember clearly was how he dragged his entire suitcase into the bathroom to pull out one condom and the fact that I blew him just to get it over with. I didn’t swallow. I never spit, but in that moment, I did not need his extra calories and tour semen. B would do for Chicago.

I sucked on a vodka freeze pop while the Fourth of July party buzzed around me and typed a text to him: “Hey. Are you dating anyone?”

He responded almost immediately: “No. I am married to my band. Why?”

“That time we fucked was pretty funny. Should we do it again?” I looked at the text for a total of 10 seconds and pressed send.

“It was funny and not funny at all. Haha. I don’t know how my life will be in Chicago with my ex being there. She might try to kill me or fuck me.”

I chewed on my face. I should have taken this response as a clear sign of his disinterest, but instead I pressed on.

“Ex stuff is stress. Do what you got to do. We could sneak off and fuck in a closet somewhere.” I didn’t really know what else to say but I had already laid down the sex invitation and I couldn’t take it back. Across the lawn I could see the guitarist to Deafheaven smoking with his bandmates. Amelia and Pelly had reamed him out and called him a sexist for saying “bitch” on Twitter too much. His glasses were tipping off his nose. He looked high.

A text from B: “I do want a rematch with you and I could do a closet but I would prefer a bed.”

“Musicians should always fuck musicians,” I typed. “Our lives are ridiculous.” It’ was true. I didn’t even want to have sex with B again. I just wanted something.

“You are an evil little planner. I’ve never prearranged sex before. haha.”

What grade is this?

When I took Lord out of her cage and balanced her on my shoulder, she barely made a fuss. I could feel her little claws on my skin and her rough tail curl through my hair. My bandmates laughed as I paraded around Brittany’s nearly empty living room with the lizard on my shoulder. When Lord squirmed, I squirmed. She was small, but I was scared of her. I knew she could shit on me or piss on me or bite me. She was an animal and unpredictable. She had murdered her mate.

That night when I ran into B outside of the venue he was playing, he said “hi,” kissed my cheek and acted awkward. That rush of guilt over my own aggression wafted over me. Why did I text him all that stuff? I didn’t even want him. Explaining would have made it worse, so I kept my mouth shut and went inside.

Three years ago, a magazine in Calgary commissioned me to write an article about why female musicians never get laid on tour. My basic theory was because we do not care. If you want to get fucked, it’s easy, but women are picky and we female musicians do not like to fuck down. We want to fuck up. You have to be self-disciplined and have drive to be a successful female musician because the odds are already stacked against you. Women who have drive do not fuck down. Sorry, male groupies, but none of the women you love with guitars will ever fuck you. (It’s probably better that way, because if you fucked them, you would know them and the mystery would die.) We want equals or we want to climb the ladder. Let’s blame the lack of male groupies on the stereotypical gender roles of sexual negotiation in rock ’n’ roll. Besides, we only fuck down for fun, like a game.

When I got back to my room after the show that night, I laid in the dark, hot room staring at Lord in her cage. I was Lord, biting the tales off of all my male peers. I was always scaring men away by default. In the last few years there have been two successful books published about the declining “masculinity” in the modern-day man. Both Manning Up: How the Rise of Women Has Turned Men into Boys by Kay Hymowitz and The Making of Modern Immaturity by Gary Cross theorize that in the postindustrial economy typically feminized traits have been favored in business and education, keeping women on top as successors to what used to be considered male-dominated fields. Hymowitz claims that this change has left men stranded in a place of “pre-adulthood” where they never butterfly into masculine men. When it comes to sex, most women expect that if they want something done, they have to do it themselves. I assume this always which leaves me in a perpetual state of aggression and then, shame spiraling. Lord didn’t feel bad for killing her male peer.

But unlike Lord, I wasn’t ever willing to chameleon to match the skin of those around me. I did not want to blend into my surroundings and be agreeable to get the attention of the men I thought I wanted to feed my ego. In The Art of Seduction by Robert Greene, he pens a chapter about how you must mirror the likes of your “victim” (or love interest) in order to seduce them. I just don’t believe in that kind of psychotic approach to sexual interactions, plus it’s not very fun to always shape shift yourself to get what you think you want.