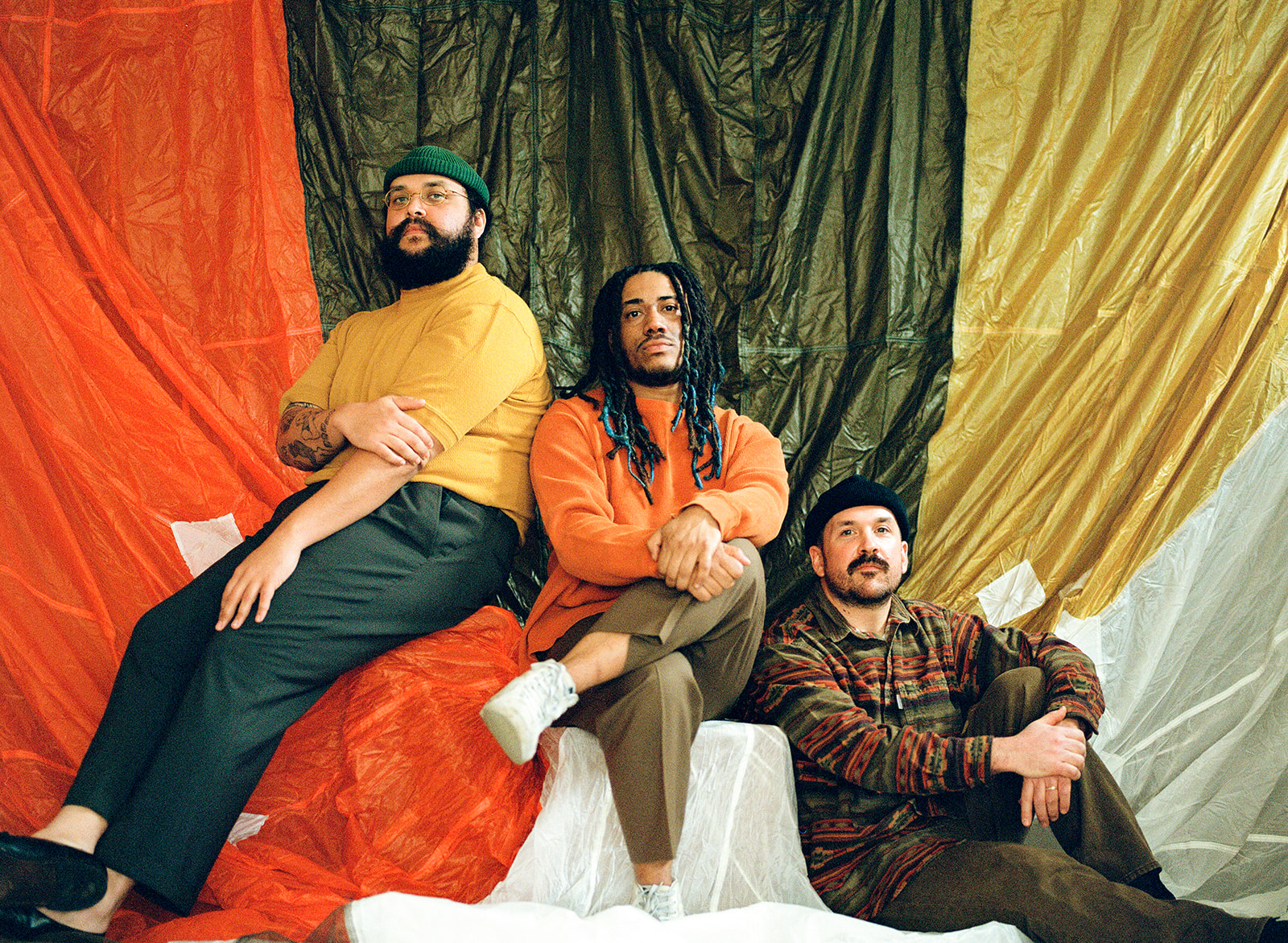 Free Association is a recurring feature that reveals the breakthroughs and roadblocks behind our favorite new records. Kinda like a DVD commentary beamed from a confessional booth.

On deck today: Indianapolis’ own Sirius Blvck, Oreo Jones, and Sedcairn Archives, who take us on a whirlwind tour of their dynamic 81355 debut This Time I’ll Be Of Use. Due out tomorrow through 37d03d — the label/collective led by Justin Vernon and Aaron & Bryce Dessner — it’s an immaculately produced exorcism we can all relate to in the postscript of the pandemic and this country’s long overdue wakeup call.

Or as OJ says, “81355 means so much. It’s love, pain, anger, desire, happiness, hope. I don’t think this project would have been as significant if we hadn’t all connected together this past year under the current climate of the world. All three of us really pushed our individual boundaries, and you can hear that on the record….”

“CAPSTONE”
Sedcairn Archives: The lyrics that I sing in this song are “they could always come undone.” When I say “they” in a song I’m usually referring to the 1%, or whatever you want to call the people that have all the money, power, and resources and use it to mislead everyone else and turn us against each other.

To me, this project is about life being so precious and special. To me that fact fuels the anger that I feel towards these people who throw up smoke screens to distract from the blatant evil that they do.

I think Blvck and OJ’s lyrics on this tune really capture that theme of an uneasy balance between being thankful for the blessing of life and being aware of these forces who just stamp out life from the world to enrich themselves. In this song I think they kind of set up that gut feeling, and they go into more detail throughout the record. I think you can and should be both happy to be here and enraged at the conditions we find ourselves in, those two feelings belong together right now.

The drum part that opens the song came straight off of an old Maestro Rhythm King, and the Suzuki Q chord rings out for the first time of many on this record. The Q chord is beautiful, easy to use, and fun. It’s an instrument for the people.

Sirius Black: I wrote about spiritual struggles and generational trauma. I wanted to set the tone and paint a vivid picture right off the bat. It’s an introduction to our World.

Oreo Jones: I approached “Capstone” in a similar direction. At the time of writing the record I was reading a ton of poetry and writers from the late Black Arts Movement around the ’70s, like Larry Neal and Amiri Baraka. Breaking a lot of the mental chains that bind us, and keep us from reaching our full potential. There are a lot of Native American migration routes and old territories in Indiana. I tried to acknowledge some tribes that settled in Northern Indiana and the land that was stolen from them.

“MAROON”
SA: Matt Riefler did an amazing job engineering this record. On this jam he set me up with a ‘spray’ channel to sandblast the snares by hand. I was in a corner straining my voice like an idiot to get the vocal samples for the hook part.

SB: I wrote about the rewriting and whitewashing of history. It’s about the lifting of the veil and the internal trouble that can come about from peaking on the other side.

OJ: Blvck and I wrote this together just bouncing words and bars off each other. I love when we push each other in the studio. Our engineer Matt Riefler sat up two mics side by side and if you hear throughout the track we get more intense by the end. We were just so hype feeding off each others’ energy tracking that joint.

“HARD 2 FIND”
SA: On the hook I’m speaking from the voice of someone who does not exist in this world anymore. OJ’s words are so powerful and necessary.

SB: I recount childhood memories and recall moments when I felt invisible. Or when I wished I was. Thinking about the marginalized voices around the world that go unheard and realizing that the anger we feel is justified.

OJ: I was writing with a chip on my shoulder. I wanted to express how hard it is to be an artist or even a human being sometimes. With all the noise going on in the world sometimes you feel like you’re going insane. The Middle Eastern conflict was burning in my brain as well (Free Palestine). There was also a joke on Twitter around that time about Shakespeare writing King Lear during quarantine around the time of the bubonic plague. LOL….

“ANOINTED”
SA: One of the drum parts in this jam is a room recording of an old Roland CR-68. The bridge part features some of my longtime besties: Ostry on his drum kit, and 2k on the bass guitar. The people that are trying to kill our babies are politicians committed to austerity, and the police that they order around. They try to cover this up by saying they’re doing the opposite. It’s been working for them for a while now.

SB: I wrote about my mixed feelings on religion and growing up in a Pentecostal household. And wanting to protect my family.

OJ: I was just talking shit — LOL. I wrote my verse in the studio trying to just spaz and Blvck was hyping me up. The bridge is my favorite part because of the live instrumentation from Ost, Moose (Sedcairn Archives), and 2k. Blvck and I were on our Beach Boys shit tryna take it to the bridge.

“THE VOID”
SA: Terminator 2 was on the TV while we were writing this hook at Riefler’s.

OJ: “The Void” is my favorite track on the record. I wrote my verse during the height of a lot of the protests in summer 2020. I have a mental picture of some cars on fire in downtown Indianapolis. A couple days before, a kid was shot in front of my crib in broad daylight. I just remember vividly wrapping a towel around his arm trying to keep him calm. The cops showed up shortly and were just complete assholes about the situation. I think I found myself talking to a lot of my ancestors and my elders who aren’t on earth anymore trying to make sense of how they would deal with the pressures and anxiety.

“THUMBS UP”
SA: The thumbs are up half-heartedly.

SB: Is about the chaos of the world. It’s a sunny day and everyone is smiling, but you can’t help but feel like this is a nightmare. It’s the sounding of a quiet alarm.

OJ: I touched on addiction and mass incarceration. Fentanyl is destroying a lot of lives around communes all over the country. I was also reading a ton of Etheridge Knight around the time of writing Thumbs Up, so I tried to pay homage to an Indianapolis Icon.

“We were all in our
own little universe
with this one”

“PURPLE”
SA: This beat was made on the Dave Smith/Roger Linn Tempest.

SB: It’s a getaway. It’s like a vacation you take in your mind before you walk into work for a long shift. It’s a little oasis in the midst of the album. Something about love to lighten the mood.

OJ: Moose (Sedcairn Archives) was in his bag on this lil interlude. It just made me think about day tripping and looking at colors as emotions. Also taking a shower with your clothes on.

“THROUGH A PORTAL”
SA: We all felt pretty strongly about keeping this as one song. OJ first came up with the idea when we were listening through instrumentals at Listen Hear. These were all back to back on a playlist. On the last section I had a mumble version of the vocal and Blvck wrote the lyrics to it. In my head I was thinking of Billy Corgan singing it.

SB: Encompasses each of us as artists individually. We each get to flex our personalities but this track was such a collaborative effort. It’s the perfect ending to the album.

OJ: Yup, I couldn’t agree more with Blvck. We were all in our own little universe with this one. I was trying to think of a lot of metaphors about being from another planet. I tried to paint a picture of my mind using some Naptonian references to the Andretti’s and Major Taylor. We have so much rich history in Indianapolis that no one really talks about. I think it’s important to share stories from some of the most iconic people in our city that changed the world. 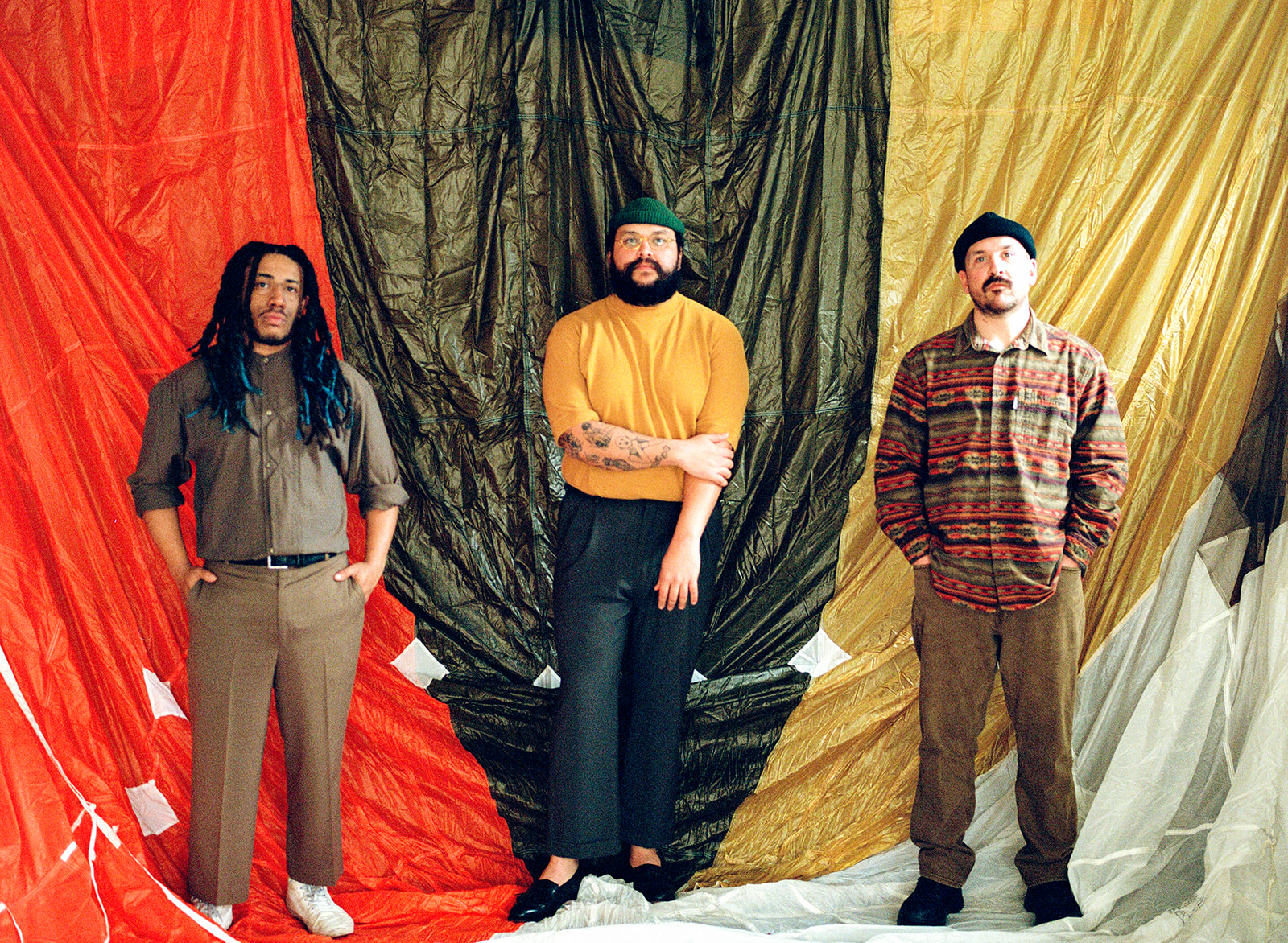 Previous GROWING Make Us a Mix,
From Sun Ra to Roedelius
Next Penelope Trappes Shares
the Stories Behind Her
Stunning New Album