A QUICK TALK WITH … Wild Beasts 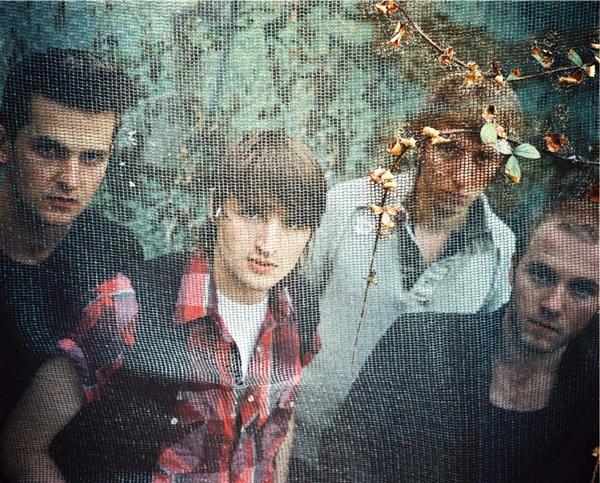 Some bands are inherently masculine. Some bands are inherently feminine. Britain’s Wild Beasts are claiming the distinctive androgynous zone found somewhere between the two. This is mostly due in part to singer Hayden Thorpe’s voice which alternates between wildly flamboyant or lecherously creepy. He’s undoubtedly the most distinctive vocalist singing rock music since his influence Jeff Buckley.

And while the band has garnered almost nearly critical acclaim (Two Dancers was one of our favorite albums of 2009), it’s the band’s growing and obsessive fan base that warrants Wild Beasts our attention. What is it about this band that inspires such a feverish response (as we’ve discovered through many conversations, you either LOVE this band or…it’s just not for you)? Thorpe explains to us that perhaps it’s the art rock quartet’s ability to not condescend to the listener,  or as he tell us in our chat, “high art [can be] down to earth, and personal, and transfixing.”

At the end of the year, there was a very strong critical reaction to the Wild Beasts’ second album Two Dancers–are you surprised by this?
I’m not fully aware of it but I’m also not fully surprised. We have been challenging ourselves and I’m not surprised that people are reacting to it. We make provocative music. It’s not for easy consumption, but that’s what art should do. It should warrant a strong reaction.

I would be hard-pressed to attribute specific influences to the Wild Beasts sound.
Thank you. That’s very kind. Look, I do think the English language has been neglected in pop music. It seems like it’s deviated from complex human emotions and everything has become Disneyfied. I think we’re trying to make music that feels complex and reflects the intense nature of human emotion. We’re being honest and I feel like that’s an influence. The want to be honest even if it makes people uncomfortable. That’s in our music and it’s not something easily digested. It’s weirdness.

When you talk about honesty, do you ever consider detaching? Like, at one point, maybe I should censor this idea because it may sound too hard for listeners?
There’s definitely a feeling of constantly scratching around in the dark. Writing lyrics and songs is like fumbling, and in your head, you start to develop a map in this darkness. But writing whatever you want is more of an empowerment. The more you tell, the more you’re able to tell. The more people understand you and the more you’re able to get away with more.

In a sense, our band are like a film or a play and the more you are exposed to those characters, the more you understand them. These characters of ourselves are being listened to and analyzed.

There seems to be references to all things high art. I use the term cautiously because people tend to cringe at the idea of something being “high art.” What are the specific qualities of â€œartâ€ that inspire you and make you feel passionate about? And are you concerned about the accusations of being pretentious?
High art is often seen as a posh and privileged thing. High art takes ugly things, brutal things and somehow makes it beautiful. Why is that something only for the privileged? High art is down to earth, and personal, and transfixing. It’s a reflection and an insight that we’re all somewhat uncomfortable enjoying. Taking something awful and making it joyous and inspiring is quite a difficult task. What a challenge to be able to do that.

What abut reflecting on pure joy?
Absolutely. But there’s never really any pure joy. Everyone in the world has problems. It’s a great condition to think of ideally but:different music serves different purposes. Our purpose is not to make joyous music like the Jackson 5. We’re doing what I feel we do best.

Can you articulate the difference between Two Dancers and your first Limbo, Panto?
Yeah, we discovered rhythm this time around. We allowed for ourselves to try and be groovy.  It implies sexiness and energy that words and lyrics could never accomplish. I hope we got it right. Being unsuccessfully sexy is not a good thing.

You reference Morrissey and Leonard Cohen as lyrical influences but vocally, you have this brave an distinctive shift between masculinity and femininity–the high falsetto and manly growl. It’s sometimes jarring.

My favorite singers are Kate Bush and Jeff Buckley. Theatrics. Joanna Newsom’s voice just melts me. It took me a long time to develop the courage to sing like the way I do publicly. I could sing in a more regular way but I would never get the kick out of it like I am now. It’s a hard thing to explain in logical terms but the singing, the way that I sing, is very natural. I do what I do, and that’s how I want to channel the thoughts.

Wait, it was uncomfortable for you singing that way in public initially?
Well, there have been times when I felt like this isn’t right. No one wants to hear me and I should get off stage and stop this now. You start to develop armor and a confidence, and in the end, I’m happy we confronted people and made them somewhat uncomfortable.

To the awareness that your music is not so accessible:that’s not something you hear often from a musician.
It was a huge realization for us. We did think that one day we would conquer the world but over time, if we wanted to really please ourselves and a smaller crowd, we would have to start turning other people off. That’s the reality when you’re looking for. I would hate to be the guy who ruined the Wild Beasts because we were looking to win over the middle ground. Who is that person who enjoys lifeless music? It’s not my target to appeal to a passive listener.

I’ve heard there are people that are somewhat obsessed with the band.
Yeah. It’s something we’re looking to cope with. I feel a great responsibility to those people and I feel the pressure to do justice to their obsession. No matter how obsessed they are, we’re more obsessed with our obligation to care for them. It’s a scary load to have to carry. But at the end of the day it’s a wonderful thing to have people who care so much about our job.

Have you had uncomfortable encounters?
I’ve had a few scary letters. When people declare their love for you:you get taken aback. Often they send the letter to management and they get passed on to me. It would be pretty scary if they sent it to my home. In the public eye, we deliver the best of ourselves and we’re lucky that they’re not seeing our less desirable, uglier side. The tough part is not spoiling their perception and their dream of what we are.

My favorite song off the record is â€œAll The King’s Men.â€ Can you talk about the narrator of the song?
That song is definitely poking fun at the pinpoint between:it’s making fun of the girl-boy scenario in pop music. What is acceptable behavior and what is crude when it comes to courting and going after girls.

The forthright nature of the lyrics–â€œgirls beneath me, girls below me, girls between meâ€–the lothario in this song is quite a cad.
Yes and no. We egged ourselves on to be that lothario and sleazy guy who says lines like that. We wanted to toe the line between like half-rapist and half-Elvis. That’s a line that’s blurred all the time in real life.

What was your childhood like? Where you exposed to art?
In Britain, kids aren’t exposed or opened up to art. The chances of seeing art are quite slim. But when I was exposed I felt very quickly aligned to art than anything else I was being taught. Algebra never touched me in the same way art did. But I first started writing music though when I had my first girlfriend, a serious first girlfriend, it opens up a whole slew of adult emotions and that’s when you need to express yourself and find art. It became a coping method, a way of making things make more sense to me in my mind.

This is a booty call, my boot up your arsehole.
That line became very essential to me in the beginning of the record. Because it’s a great balance between humor and angst. Humor is a very important element in the music. It’s like speed dating–you might find someone repulsive and crude but also interesting. Or funny. It’s important to laugh at grotesque and beautiful.

You seem to combine emotions together like humor and anger, joy and sadness. It’s a distinctive way to write: the art of multitasking.
Yeah, I mean that’s very important. We’re complex human beings. We don’t feel one thing at once? When have you felt something like only sadness? That never happens. So what we’re doing is trying to effectively channel what it feels like to feel.

Wild Beasts perform in New York this weekend, at Bowery Ballroom on Saturday night and the Music Hall of Williamsburg on Sunday.

Previous FROM THE STACKS: White Hinterland
Next Robert A.A. Lowe Celebrates Recent Brooklyn Move, Rose Lazar Collabs With a Snow-Dusted Art Opening At By and By Gallery