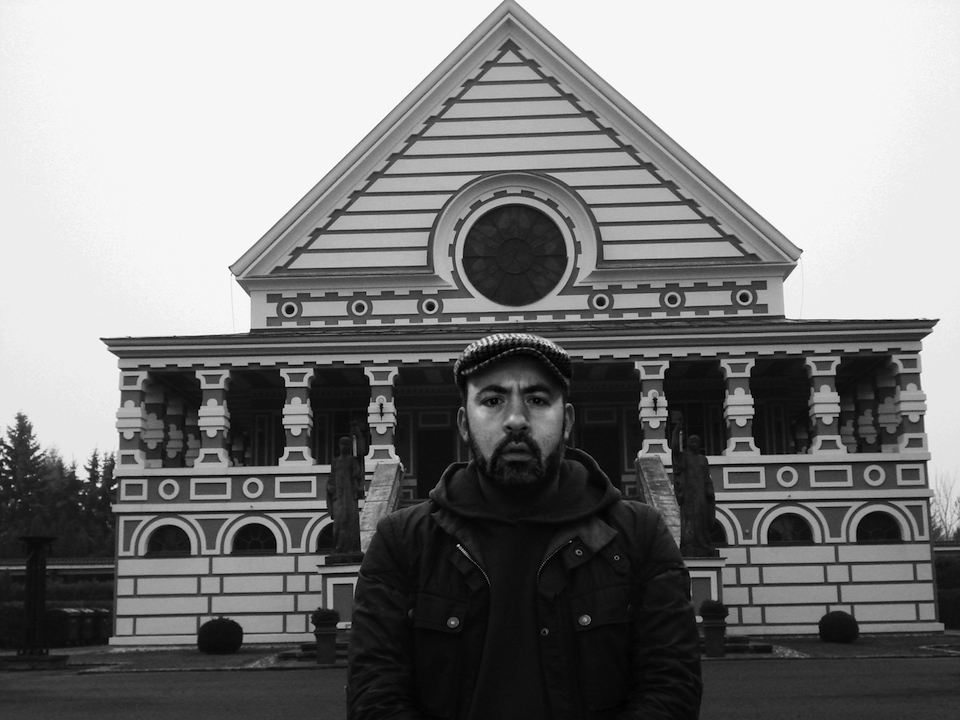 As longtime followers of his Finders Keepers imprint know, Andy Votel is one of the world’s most consummate crate diggers. Whether he’s shining a light on Suzanne Ciani’s Buchla-toting beginnings as an experimental sound designer or obliterating the old world notion of “international music” with dust-clearing compilations of rarities from Thailand, Iran and Spain, the passion Votel puts into his projects is matched by just how mad the music itself is.

Since the DJ/composer has several events happening at this week’s Unsound Festival in New York—including a performance with Ciani and Demdike Stare’s Sean Canty this Thursday, and a multimedia film piece this Saturday called Kleksploitation, which brings out the dark side of Polish children’s films from the ’80s—we asked Votel to explore the Eastern European section of his record collection in whatever way he saw fit. What follows is as idiosyncratic as ever, a “Socialist synth write-up” that shines a light on everything from the Polish Goblin to a series of state-funded recordings that are crazier than the commercial ones that breached our shores around the same time period…

1. Marek Bilinski, “Dancing Oscillators”
Boasting rave-y, high-ronic titles such as “The Birth Of Drugs” and “Pills?”, this obscure example of the music of award-winning Polish synth pioneer Marek Bilinski is taken from an unassuming 1986 German library LP (Input-Output) that also groups lot-licensed instrumentals from some of the most forward-thinking Polish synth composers—including Andrzej Korzynski and J. Dowgierd—in one handy volume. Complete with the label’s characteristic ambitious sixth form art exam sleeve designs, the track “Dancing Oscillators” is far from the intense synth-Olympic achievements found on Hungarian prog records but carves a decent E-Bloc answer to Jon Carpenter and Fabio Frizzi for those excited by the microchip macabre of the golden era of cinematic synth-pop. 2. Władysław Komendarek, “Tesknota Zeglarza”
Władysław Komendarek originally played keyboards alongside members of collectable Polish beat bands bands such as Czerwone Gitary and Romuald & Roman. He was alsog a founding member of the critically acclaimed band Exodus. In 1984, having toyed with the idea of going solo, Komendarek approached the state label Polskie Nagrania to release a cassette-only album of solo electronic music which was released to a mixture of warm critical acclaim, confusion and intrigue. From this point on he has managed to carve a striking omnipresent image as Poland’s answer to a synth-pop Sun Ra (complete with soldering iron colander headgear and footlong facial hair), recording albums on unidentified electronic gadgets and homemade appliances while balancing live appearances with school workshops and general robotic Moondog-ish antics. His second LP has a picture of his arm on the front with some wires sticking out of it which basically screams “Buy Me!” in a robotic voice to fans of Kraftwerk and, err, Sarah Brightman (?).

3. Zodiac, “Tank Crew”
For almost 30 years, original copies of the debut LP by this Latvian answer to France’s disco sensation Space have marked a clear cross-continental trail through the charity shops and flea markets of central and Eastern Europe rehousing Zodiac’s unique brand of synthsploitation in the collections of young crate-diggers and cover-up record dealers alike. By 1985 their third album was the result of the group’s soundtrack career, comprising a selection of moodier electro work-outs for fun-packed Soviet family features with titles like The Tank Crew and A Woman’s Sorrow. 4. Andrzej Korzynski, “Pan Kleks”
After working in the same studios as Jean-Claude Vannier in Paris and Ennio Morricone in Italy—thanks to a governmental family connection of film director Andrzej Zulawski—Andrzej Korzynski’s dreams of international recognition were damned as he returned to Poland to have his earnings and his passport confiscated, and all his worldly experience forced into a restrictive box as a composer for the state-owned TV and radio orchestra. From here he traded radical songwriting and free speech for children’s TV commissions and the use of the state-owned studio and ALL OF THE BEST STATE OF THE ART SYNTHS IN THE WORLD!!! (including America and Russia).

In 1977, while obsessed with Arp synthesizers, he inaugurated Poland’s first synthesizer orchestra, named Arp Life! a rival to Latvia’s Zodiac and drawing similarities to Arpadys and Space Art from Paris, while providing library music for central Euro labels and synth-scoring Polish cinema for global syndication. In late 1981, four years before the murmurs of acid house, Korzynski was experimenting with a prototype Roland TB 303 to accompany his TR 808 beats for kids to sing Polish nursery rhymes over-the-top while spacemen thumb wrestled with judo masters. Meanwhile his famous friend Zulawski, having fled Poland, would pay the Polish government mega-zlotys from a French bank account for Korzynski to write cold-wave disco (I’m trying not to say proto-house) tunes for the most enjoyably depressing video nasty of our era! Sadly all this happened on the other side of the wall and we knew very little about it … Cue Finders Keepers. 5. Benkő, “Babel”
You might not have not been allowed to buy Levi’s Jeans, a Johnny Cash LP or a can of cherry Coke in Hungary in the late ’70s, but if you played your cards right you could get a decent synth… kinda! When Hungary’s leading sexy glam-synth-prog-pop-combo Skorpio had hits in Japan, they were kindly granted to visit the country as long as they didn’t get paid in cash. So they got paid in Suzuki motor bikes! Their other leading contemporaries Omega had a similar quandary around the same time, which lead them to “earning” the best collection of international music technology in the entire country. (Which in later years led to the group owning the country’s leading multi-million pound live music production company.) After the release of Omegas ninth (!) album in 1981 (titled Omega 9) and as the foreshadows of synth-pop reached the edge of the Berlin Wall, the band’s keyboardist, László Benkő, had amassed so much global synthesizer technology he had to rent a separate house… and start a new band. His new synth project didn’t leave much room for human members; in fact there wasn’t even enough room for his Christian name, so, under the name of Benkő he would produce two ostentatious solo synth albums of biblical proportions called Lexicon 1 & 2. The new testaments of Magyar proto-electro perhaps? Synthcyclopedia Hungaria! 6. Zdeněk Liska, Jáchyme hoď ho do stroje!”
Socialist era’s best cinematic secret—without mentioning that Russian military Betamax tape of a smoking rhinoceros driving a time machine in 1931—Zdeněk Liska is known to the savvy as the Czech Morricone, to coin an instantly rebukable and quite insufficient comparison. The fact that most film directors would re-shoot, edit or extend their film scenes on this composer’s request is testimony to the fact that this relatively unknown soundtracker knew more about filmmaking than most people working in the state-owned studios who paid his bills. Recreating, looping, reversing and perverting most of a film’s ambient sound effects to compliment his enchanting macabre choral experiments or concretist scissor-happy rhythms resulted in successful scores to futuristic films like the early Ikarie Xb1 from 1962 (which replayed recorded notes of an orchestra off pieces of magnetic tape) and his late period achievement Joachim, Put It in the Machine from 1974 (which used an early computer sequencer and typewriter and telex effects). I’m not gonna give Liska the hard sell here but despite his limited handful of commercial records released throughout his state-governed career, the man was a genius.

7. Czesław Niemen, Twarz? do słońca
As a prime candidate in the record shop section entitled “OVER AMBITIOUS MUSIC”, Poland’s leading foreseer of everything “next level” scheduled his 1977 Idée Fixe synth-ridden concept album (based on the philosophies of Cyprian Kamil Norwid) as a luxurious double LP, but upon release had to add a bonus 45 into the package just to fascinate a further 13 minutes of awesome theatrical Vangelical synth-sitting exercises. This extra serving of Mini Moog, Mellotron 400, Moog Bass and Synthi EMS digital sequencer is perhaps his best record in its own right and is often found estranged form its 12″ parental gatefold grazing in record shops with its orange Brigitte Riley style print and absolutely no text on the sleeve.

8. Beograd, “Opasne Igre”
Having more access to Western pop than some of the aforementioned bands, the Yugoslavian trio Beograd (Belgrade) took their influences of Kraftwerk and Ultravox and singlehandedly invented Serbian synth-pop using unspecified domestic synths and drum machines (maybe Russian imports) and occasionally a drummer from another Yugo band called U Škripcu (whose name translates as Dire Straits!!!). Aside from releasing their only LP through the state-owned record label RTB, the band released a 45 aptly called “TV” and were rivaled only by another Yugoslavian synth-pop band called Videosex! (approach cyber digging with caution). 9. SBB, “Przed premierą”
The Polish Goblin anyone? Even with a small filmography of macabre soundtracks to his name (Golem and the Polish War Of The Worlds), SBB’s main driving force—Józef Skrzek, formerly of Niemen and Breakout—kept most of his electronic prog-funk for his live band, whose loud bass, synth drones and sports-rock drum fills now draw clear comparisons with Italy’s best cinematic proggers and can still be compared to Spain’s Fusioon and England’s favorite electronic jazz-rockers EGG. Despite the band’s expansive grinding electronic sound most of Józef Skrzek’s synth-work came from filtering the bands instruments through a Minimoog and various other tight-budget production techniques. Like most Eastern Euro prog LPs, you have to go needle hunting a bit to find the killer electro riffs while dodging the epic colliding guitar solos and power balladry… but hey, why should the band do all the work? Oh yeah, his surname apparently translates as “Frogspawn”! How prog is that?!

10. Szintézis, “Hullámmozgások”
Okay, so for my last entry, how about I ask you a question? Who the hell were the band known as Szintézis? The track “Hullámmozgások” on this Hungarian new-wave compendium released on the Start label (a punky division of the state-run Hungaroton company) in 1985 is cut from a similar cloth to that of Ekseption, Egg or the Giorgio Moroder track that was sampled on DJ Shadow’s “Organ Donor,” but in the case of this classical adaptation we are subjected to growling ’80s keyboard lines, a prominent punk-funk bassline and some tight, close-mic’d drums played by Horváth Tibor from the Jazz rock group Saturnus. Originally played to me by Gabor Shuriken while he was visiting Manchester from Budapest and coveted daily for the following months.

With little in the way of background info, this one-off instrumental track might just be a well known band playing under a different name, as was often the case in what was perhaps the most incestuous, switched-on and fashion conscious pop industry in the whole Eastern European network. Like many of the tracks on this list this bizarre instrumental was ahead of its time, adventurous and utilized government funded high-tech specs to deft effect. As long as music was instrumental, abstract and kept its opinions to itself then the studio bills got paid, the wax got pressed and nobody asked any questions.