BREAKING: An Interview With … Emika 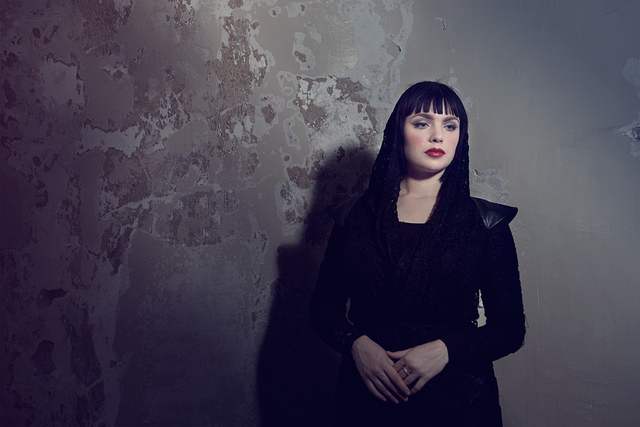 Since Emika is releasing a new EP (3 Hours) through Ninja Tune next week—not to mention currently hosting one of the most compelling remix competitions we’ve ever seen on Soundcloud—self-titled thought we’d finally share an interview from the producer/singer’s tour with Amon Tobin late last year. That’d be the one where she bowled sold-out crowds over with nothing but cold-pressed synths, sub-atomic beats and steely-eyed melodies.

self-titled: Let’s backtrack quickly; you interned for Ninja Tune? How did that happen and how does it feel being one of their artists now?
It feels really cool! I think it’s very important to appreciate what happens in the process of releasing music, and you will only really appreciate that if you sit an office and do it yourself! That’s what inspired me to work with Ninja Tune. I like their attitude towards creativity, as well as the independence that flows around the world. I didn’t earn any money from it; I did because I loved it, and partly to test them out as well. It feels right.

How did your tastes change and what were you doing when you moved from Bristol to Berlin?
The reason why I moved to Berlin was not because of the music culture; it was more about the people and society. The time I spent in the UK and Czech Republic, I observed lots of things that I didn’t like in Western society and without realizing it when I was teenager, I created this idea in my head that I could be the adult I wanted to be and with Berlin. I found that idea within five hours of being there. I found it in the architecture, the language, the history, the way there isn’t much bullshit marketing in Eastern Berlin, the activism amongst the youth, as well as their livelihoods. Everyone is poor and is happy to be alive. All I want to do is have a sandwich and have a nice day. I don’t want a fucking mortgage and to worry about having my kids getting an injection, or shit like that. East Berlin, to me, is the closest thing to normalcy.

Those experiences definitely formed a sound that has evolved considerably. Your Price Tag EP early on was a welcome contrast to your full-length album. Do you think you’ll continue to explore more tunes in a techno-laden context?
Well, [Price Tag] was a collaboration with MyMy, and all my LP stuff is written solo, but the next batch is definitely going to be more direct. My legato template, where I’ll get really obsessed with a couple of things and just eat them. It’s that whole process of devouring something.

To understand underground music, you need to have a notion of pop music. I’m curious to develop my voice and work with more obvious beat sounds as opposed to textures from sampling. Be more upfront and pure and simple. For example, I love Omar-S, early Kenny Larkin and a lot of other stuff from Detroit and the Midwest. That’s all the music I buy on vinyl. However, now that I’m performing, I realize what works and doesn’t work. It’s all about being in my bedroom and discovering new energies to bring to the crowds in front of me. All these experiences are inspiring me to be a bad-ass improvisational artist.

What was the process of making you album like? How personal was the experience?
I’ve been writing songs for ages. The actual album on Ninja Tune took nearly four year. For two-and-a-half years, I worked with the brilliant Rashad Becker. He was very critical about my lyrics and such, which I would have to defend and explain to him. As a 21 or 22-year-old, you think you’re self-aware, but he is 18 years older than me and has seen the industrialization of dance music. I did all the composition and recording myself, and everything else was done in his studio on analog gear. It’s had very careful, detail and considered treatment; it’s not a pop record and neither an underground thing. It’s a unique experience that turned into something of its own.

Some tracks on the record are expertly designed, yet the composition is quite minimal and very euphoric; how did you strike a balance that was suitable for vocal exploration as well as instrumental, not giving into one or the other?
I respect sound; I compose sound in a way that features and honors the individual sound. I don’t have a big, loud pop voice so I simply don’t compose melodies that would suit that type of voice. I really like crunchy, metallic percussion and I like to listen to each individual sample that I’ve made; the composition is always informed by the sound. Sometimes it’s the opposite, and I get pissed off and hear something and work for it. Either the phrase informs the instrument or the sound informs the phrase.

The atmospherics on the album are stellar. Did your field recordings at Berghain attribute to that at all?
No, that comes from years of listening to music and getting into that head space. I used to spend all money on records and wish I could go out but I was young and not allowed. It’s just being with your own thoughts, and that’s what comes out in my records as well. The Berghain thing is a completely other vibe; that project was fucking challenging—this huge idea with so much potential.

You’re already working on your second album, right? What can people expect from it so far?
Beautiful melodies, bad-ass beats. You think you know what beats are but you just don’t fucking know. I got some new analog kit that no one’s got. It’s gonna be raw; it’s gonna be crunchy and Germanic. Functional. Nothing more, nothing less.