Catching Up With… Andy Stott 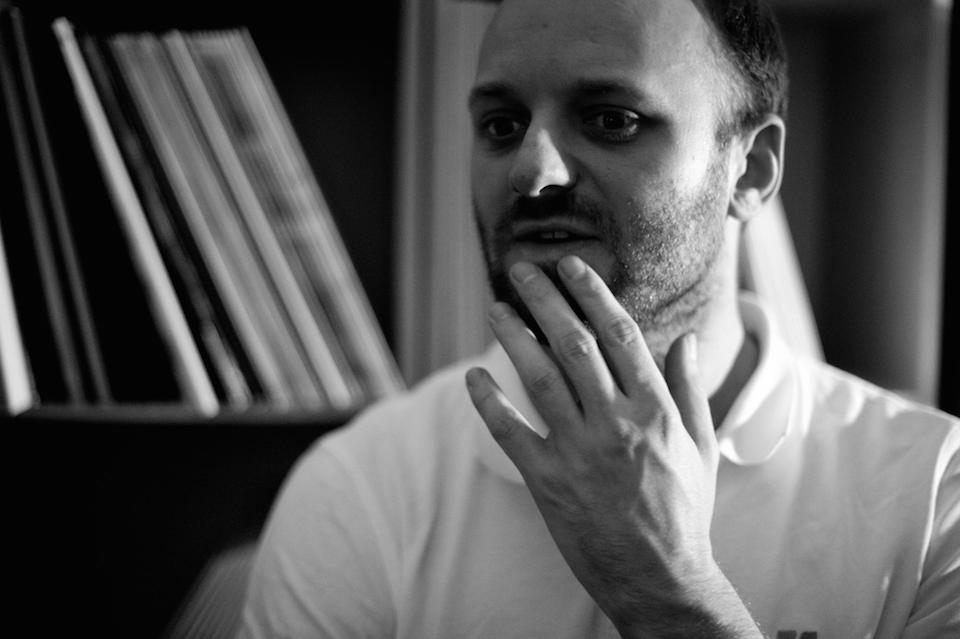 There’s beauty in aggression—in letting one’s creative voice not just sing but roar. That’s certainly the case on Andy Stott’s newest album, Faith In Strangers. Out now through Modern Love, it’s the producer’s most daring effort to date, an expansive amalgamation of border-bent rhythms, hardware sorcery and maximized manipulations that builds upon nearly a decade’s worth of dizzying work. (See: everything from the 2005 track “Demon In the Attic” to last year’s Millie & Andrea LP and Stott’s breakthrough Luxury Problems.)

In the following interview, we discuss everything from music that’s tailor made for mental breakdowns to the bliss found in blown-out beats…

The range in tempos and mood on Faith In Strangers is a lot more abstract than Luxury Problems. Were you trying to move away from the last album’s vibe or take a new direction?
This album was meant to be kind of a clean slate, but at the same time it was purely incidental. I mean what’s the point of doing things the same way again and again? It was inspiring to just hear new things coming into the Modern Love office. You come away with hearing music from your labelmates, peers and others and reacting in a sort of competitive way, like, “I can up that.” I was also interested in implementing new production techniques, acquiring new gear and just absorbing new and old tunes. Someone like Prince, Vanity 6, visceral shit that switched the light bulb on in my head. Also, I got into loads of grime and eski at the tail-end of last year and it threw me into a loop for the better.

It’s easier to hear and absorb the narrative if you listen to the Millie & Andrea album Drop the Vowels first. Did your work with Miles [Whittaker, also of Demdike Stare] bleed into this record?
It was stop-and-start. Once Drop the Vowels had finished, I had already started on the second album. I was in a massive transitionary period when Drop the Vowels came out; my studio setup was not entirely sorted—it was still software-oriented—and then Faith In Strangers was pretty much all-hardware.

The voices in these tracks are quite unique; “Violence” is one that presents a doom-laden Portishead vibe, while “Damage” presents a chaotic grimy sensibility to it. A lot of these tracks blur the templates of genre-specification and just go straight for the jugular in terms of sub-frequency adventurism. Why did you feel that was an important to encompass that?
The contrast is there; it’s presented as something lush, but everything under a veil of aggression; getting to the heart of it all through what’s underneath. It was important to present the maximizing of everything I was pouring into these machines that were providing sounds, reaching the threshold and maybe even knocking it off a peg or two. Finding solace within the red, I reckon.

You had mentioned earlier about switching over from software. How much of this album was hinged upon that?
Almost everything on this album—barring field recordings—was processed through hardware. I never really got hardware though, you know? I made all serious attempts on music on software. However, I got a flanger and a pedal and get it to the red and it was way different and seeing how extremely different it was. I got a desk, starting pushing everything to its limit and doing loops, and began using for things you’re not supposed to do. There will be some bits that will never make it because they were all [angrily] maxed-out.

You’re known for making dancefloors go apeshit with your live sets. How have they changed since you finished Faith In Strangers?
My last couple sets have started at 95 BPM and ended closer to 150 BPM, which sort of suited tracks such as “No Surrender” and “Damage.” The album got announced whilst I was on tour, so I was fairly eager to put something out. I tried out “Violence” on its own in a set as it was announced unto the world and it got a good reception thankfully — but I’m trying to find where to place it comfortably. It’s like breaking the safe, you know? I’ve got all these bits of tracks in front of me, building this collage. I guess, the point is for someone to have a neurological breakdown during my live set; that’s the end-all-be-all [laughs]!

You took a bit of time off between albums. How important was it for you to decompress, to clear your mental cache of music?
It was good to be therapeutic. I started to do things like restore a car I have, take some time for photography. However, music ended up being a release again. Once I got frustrated with the car restoration, it all came back to these Modern Love get-togethers. They were a major part of the process, to hear different angles on things and just sit down and shoot the shit with the mates while listening to new tunes. That’s really what cleared my mind and let me get onto some new ideas, get something going in my head.

What’s next for 2014 and beyond?
The back-end of this year will be pretty steady; I’m going to rebuild the live show and have a few shows on my own, go on holiday and start making new stuff for 2015. The whole process I want to do is going to change from what it was beforehand; I’ll begin a track in terms of template, do it live in one go and stop. Save it and do it again, do it raw. I’m going into the future with a new way of doing things, and that’s what going to keep me hungry for more.