Zola Jesus On… The Art of Being Tilda Swinton 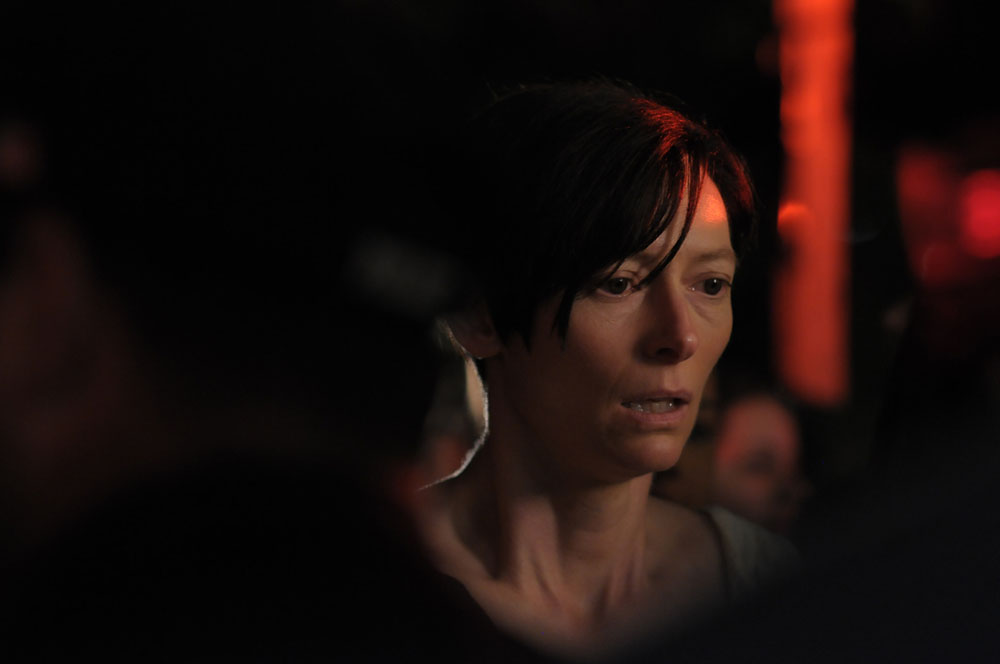 I’m used to horrible acting. I’ve watched my fair share of amateur everything–straight-to-video thrillers, those shoestring bro deals with the neighbor down the street who kind of looks the part. That’s fine; I can get into it. Whatever. I’ll use my imagination. They can kind of convince me they’re not completely terrified and confused pretending to be someone else in front of a giant camera. In my own experience, I can attest to that same out-of-body-what-do-I-do-with-my-hands-why-are- you-all-staring-at-me-get-that-camera-out-of-my-face-ness. It’s a weird thing. I don’t blame actors for being bad. In fact, it is perplexing how some can be so good. For the amount of time an actor is taking on a character they are forced to transcend who they were born as and try to be someone else entirely different. How can an actor remain sane after doing that multiple times?

There’s a line when the performance, or lack of performance, goes too far. But I’m patient. In fact it has been the saving grace and legend maker for some movies. For instance, Boardinghouse (1982)–great example. That movie’s strength is not only its painfully anticipatory title sequence. It’s that acting, or the more purist “reading of the lines.” Miami Connection (1987) is another fine example. Here we find that wonderful jack-of-all-trades producer/writer/actor everything man Y.K. Kim trying his damndest to convey all emotions at all times regardless of what the script calls for.

I love both of those movies. I’ll never forget them and they’re mediocre yet loveable acting.

But when an actor is good–really good–it can be frightening. There are those cases when a movie does everything so right, no matter if it’s a time-tested slasher or Michael Haneke, you kind of can’t wait to get to “The End,” just to know there is an end. To remind yourself you’re not just witnessing some portal to an alternate reality. It’s those moments of humanity in bad acting where you can go ‘okay, right, this is just a movie, this isn’t real.’ Sometimes those moments are craved just so you can have a tiny exhale.

For a long, long time, I didn’t give much thought to Tilda Swinton. I knew she was there, of course, but I somehow always took her for a ‘thespian’. I figured she was the kind of actor too grand and methodical for even James Lipton. Those ones that you only ever see at the Oscars, wedged in between Meryl Streep and Daniel Day Lewis.

But lo and behold, after a couple of DVD commentaries and film festival interviews later, I realize this is not, and never was, the case. Tilda (we’re on a first name basis now), from her own mouth, does not even consider herself a real actor. She just “fell into it.” Like I fell sideways into her enigmatic spell, she just as easily fell into being one of the greatest actresses of our time.

So one day finally, it clicked. I sought out every Tilda-led film I could find in my local video store. (They’ve got it all, so don’t worry.) I splayed out my findings, my newfound gifts…where should I start? I needed to know more about this creature. Who was she? Where did she come from? What makes her this majestically curious force in everything she touches? I was finally ready. I had begun to collect the experience of her in leading roles. None of this Constantine shit. (I did eventually see that though, and wow was she blinding as always.)

Beginning my journey with the biggest and brightest star, a very special movie that not only had one Tilda in it, but FOUR. FOUR TILDAS. Read it again and make sure that sinks in. Teknolust (2002), truly awe-inspiring in so many ways, but mostly due to watching Tilda play cyborg versions of herself in varying shades of post-millennial rainbow monochrome. It was a strange first encounter with this woman, but probably the perfect choice. I would go into detail about how her cyborgs survive on drinking semen tea, but you should just see it to fully understand.

Next I saw The Deep End (2001), where she plays a mother who is forced to cover for her son as a murder suspect. This role is pretty grim and unbelievable at times but her strong conviction pulls it off, and makes it that much more impactful. Julia (2008) is one of the better assets in showing her high-gear acting (and propensity for onscreen nudity). The plot is an echo of Cassavete’s Gloria, and seeing Tilda play the role of an alcoholic, manic fuck-up was pretty extreme.

The highlight in her career so far has to be We Need To Talk About Kevin (2011), which is an incredible movie about a woman who deals with raising an inherently evil child. The role is an emotionally demanding one, and it was in this movie that I truly realized Tilda’s unique unmatched ability as an actress. Her extreme versatility is championed in I Am Love (2009); the entire movie is in Italian and Russian, with Tilda speaking exclusively those two languages throughout the entire movie. Who does that? What other actress would have the balls to try to act through a second and third language so confidently? She’s not of this world, that’s what.

Even after seeing a dozen or so movies starring or featuring Tilda Swinton, I still don’t quite understand her. But I certainly can’t imagine there is a better actress out there, nor one that is so committed to her principles and ethics. Her mystery has only grown deeper and more labyrinthine, unable to fully wrap my head around the bounty of this woman’s talents. Wherever this woman is from, whether London or Venus, I’m damn glad she’s here.