Dis Fig Breaks Down
Eight of Her Favorite
Cantonese Dishes 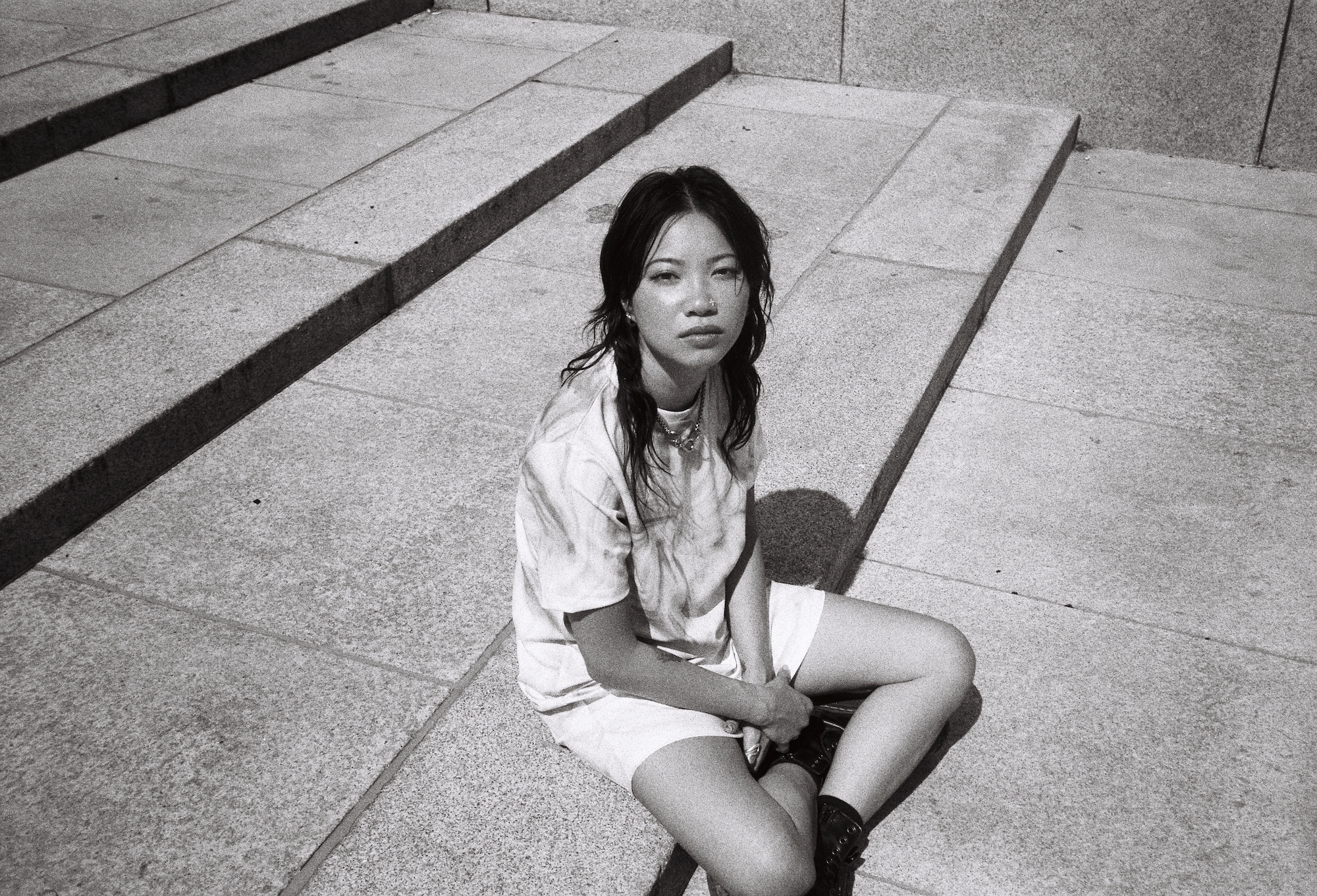 I always see the creation of any large piece of work as a birthing process. My record with The Bug (In Blue, now available through Hyperdub and dropping on vinyl December 18th) has been just that.

And with pregnancy — so I’ve heard — comes anxiety and excitement, along with heavy food cravings. While I wouldn’t say I’ve had particular cravings for pickles or ice cream, I do always find myself leaning towards food and cooking as a form of therapeutic meditation.

Living in Berlin for six years, where the offering of good Cantonese food is few and far between, I find myself yearning for this comfort of home and end up cooking often during these times. (Side note: there is a Cantonese restaurant in Berlin called Tak Kee, whose owner is from Hong Kong and it’s LEGIT.)

So here I’ll share with you some of my favorite Canto comfort foods. Let me preface this by saying, I grew up in the United States to a Chinese family that had lived in Vietnam for about three generations. My roots are from Guangdong — the Cantonese-speaking province in southern China — so most of my food traditions come from there. However, since my family has held on to these for around a century, they are not always traditional, as they’ve been shaped through migration…. 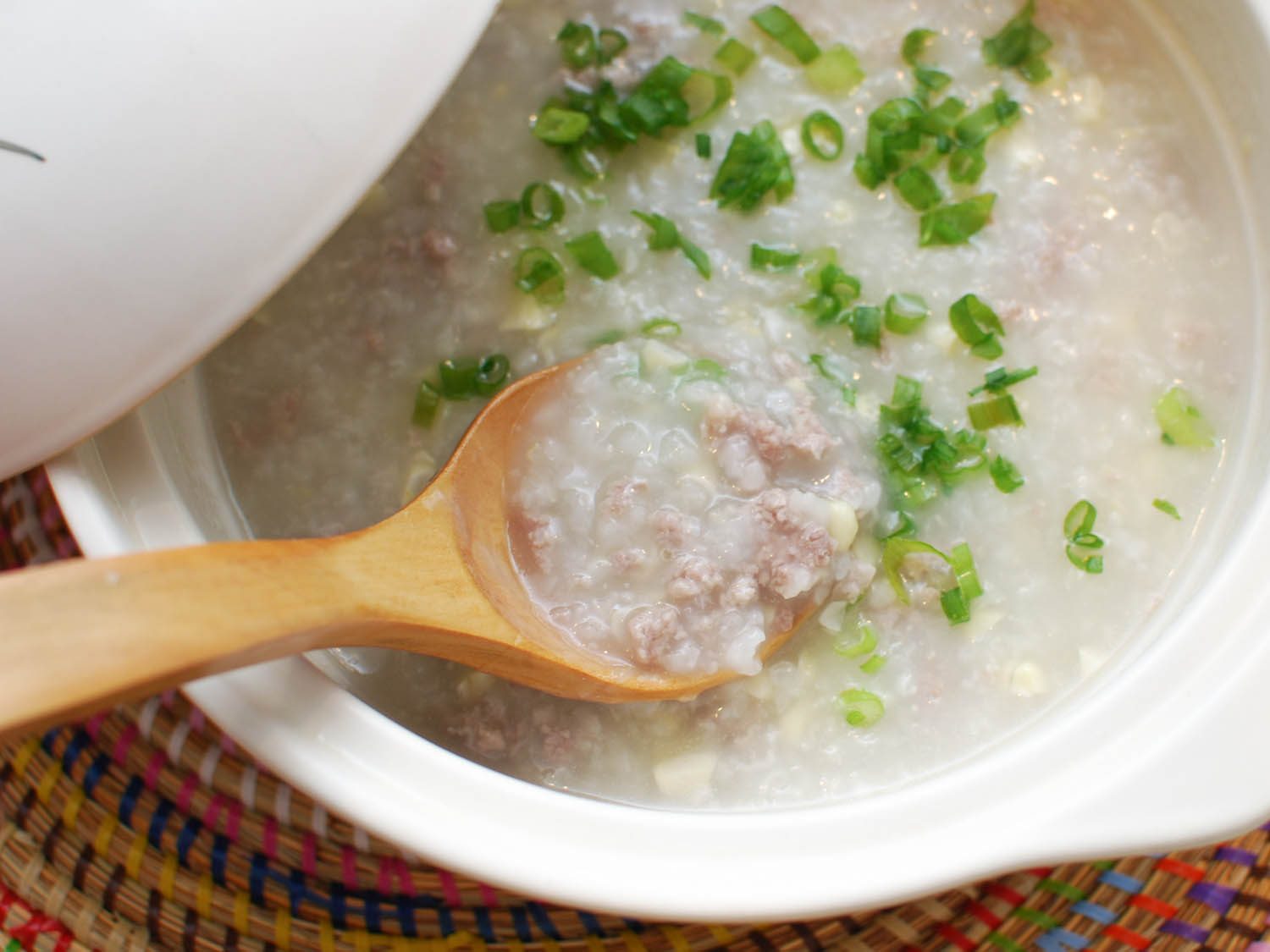 1. CONGEE
Let’s start with the ultimate comfort food: congee. This is something my mom made for us whenever anyone was sick. Cold, fever, upset stomach, not enough yin, not enough yang — any ailment you could ever imagine, her answer was jook. Basically a small portion of rice slow-cooked in a ton of water, congee sees the rice really breaking down, making it easy to digest.

This was our version of saltines and soup when you needed something easy on the stomach. Not only reserved for times of illness, congee is also eaten daily as breakfast. There are so many different varieties from all over Asia. You can basically put anything in it. However, we usually stuck to chicken, ginger, scallion, and some pork floss on top for a greedy sweet tooth. 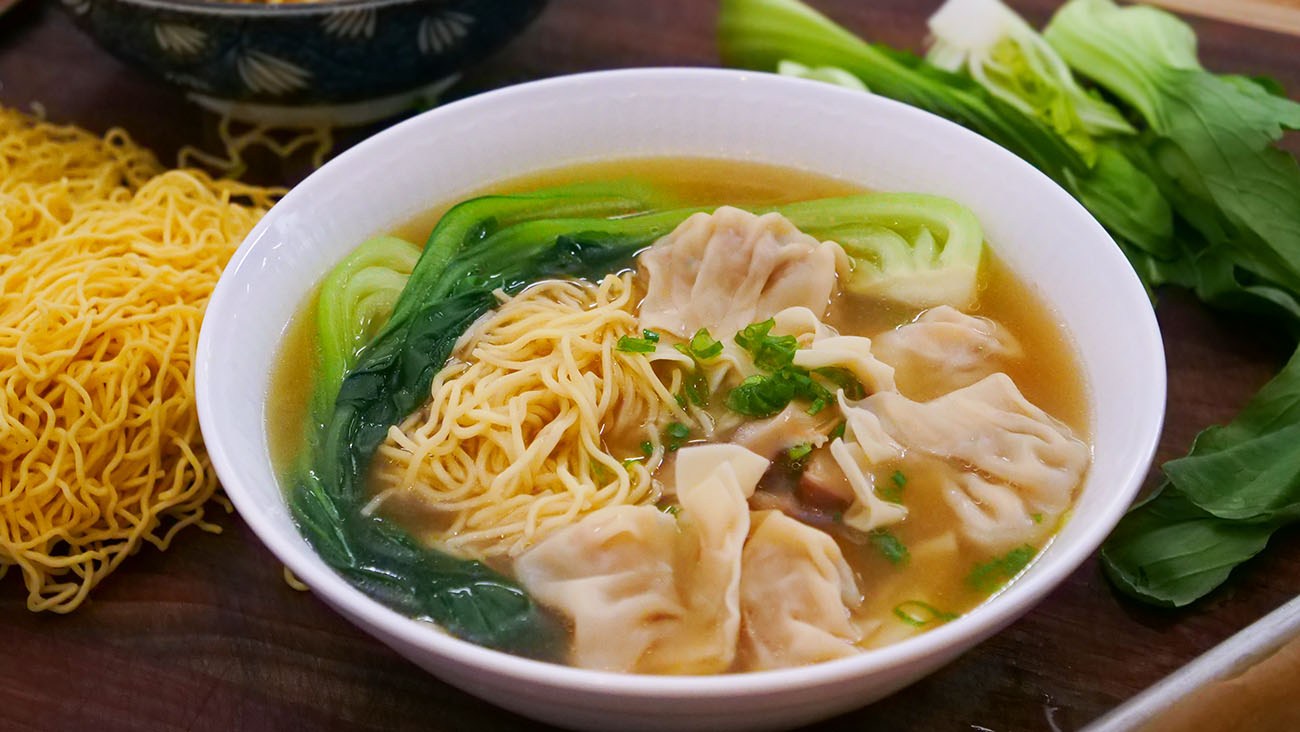 2. WONTON NOODLE SOUP
This is an obvious one, albeit essential. Half the pleasure of having wonton noodles for dinner was making the wontons from scratch. I have many a memory of playing assembly line with my sister — working hard to fold the perfect wonton and managing the skin to filling ratio to make sure neither were left over to waste. Classic fun. Afterwards, they’re boiled into slippery, shriveled, brain-lookin’ goodness and thrown over some fresh egg noodles and leafy greens in a soup. We topped it all with sesame oil and red vinegar. Fire. 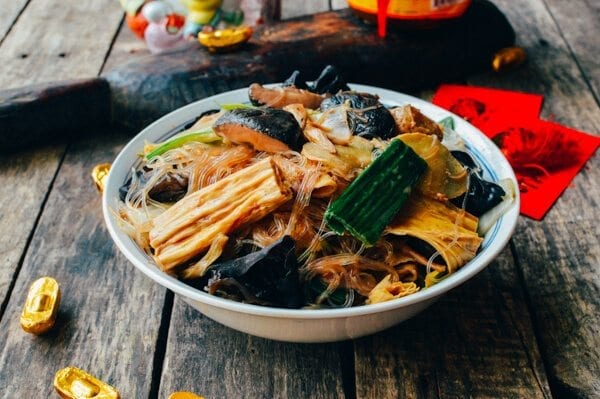 3. BUDDHA’S DELIGHT
There aren’t enough traditional Chinese meals that don’t involve meat, but this is one of them. My folks always said that as Buddhists we were supposed to eat jai every Thursday, (jai referring to vegetarian food,) but I’ve never found any evidence to fact check that. Nevertheless, this is one of the dishes eaten by Buddhist monks and traditionally eaten by many on the first day of the Lunar New Year for self-purification.

Jai is a big stir-fried plate of vegetables, many of them dried and rehydrated. Ours usually included bean curd sticks, wood ear mushrooms, braised wheat gluten, napa cabbage, mung bean noodles, shiitake mushrooms, bamboo shoots, dried lily buds, water chestnuts, and black moss, depending on what we had hidden in the back of dark cupboards. While this may be the cause of my section of the kitchen smelling so funky nowadays, it’s well worth it for the delectable aroma these ingredients create together. 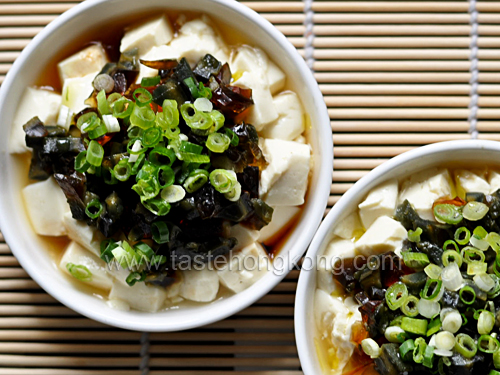 4. SILKEN TOFU WITH CENTURY EGG
If you’ve never had century egg, you probably won’t like it the first time you try it. Or maybe you have big brain and your mind is highly elevated and can appreciate the uniquely amazing flavor harvested by burying eggs in clay and ash for months.

Nowadays, they soak them in a quick alkaline solution, but what matters is that the egg turns black and gelatinous and the yolk turns creamy and gooey. If that doesn’t turn you on enough, they say the delirium-inducing smell comes from the ammonia and sulfur.

But seriously this stuff is amazing, and you’re a fool if you don’t agree. Pop it on some beautifully cubed silken tofu and add soy sauce, sesame oil, and scallions; spoon over rice. So good. 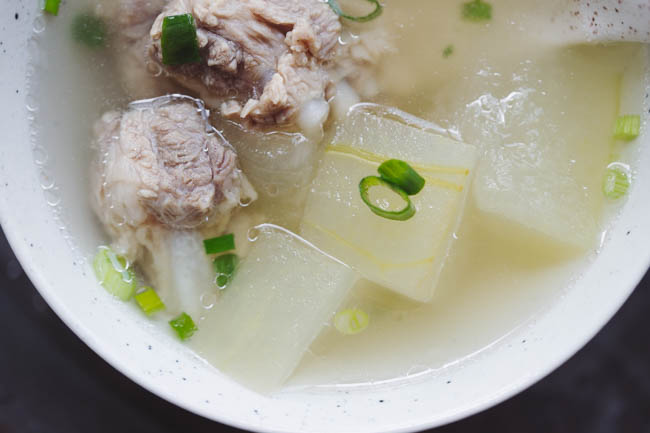 5. WINTER MELON SOUP
While winter melon is actually harvested in summer, this was a staple in our house throughout the colder months. Winter melon is a giant gourd — heavy like a watermelon, and when cooked, it has a taste and consistency a bit similar to white radish or cucumber. It’s light and delicate, with a mild sweetness.

In this soup, it’s simmered for hours with pork ribs, barley, and goji berries. Preparation of a pool of sweet, garlicky soy sauce and vinegar is essential to dunk the ribs in while eating. 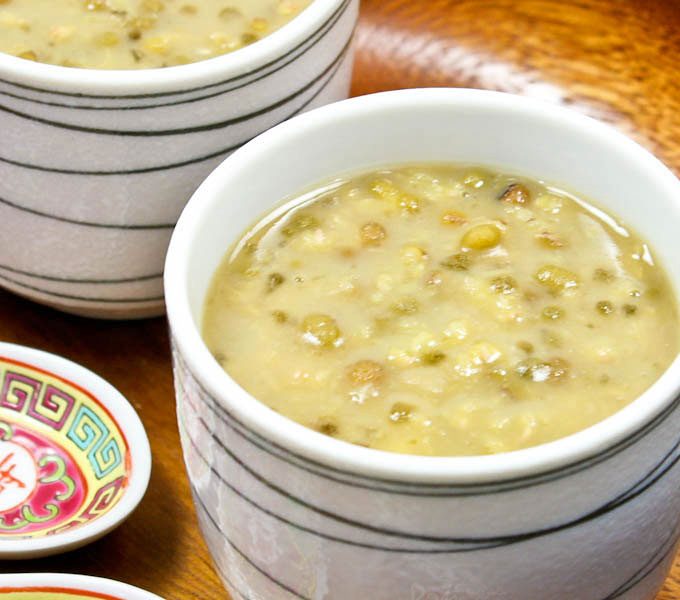 6. TONG SUI
Tong sui translates to “sugar water”. While those two words remind me of a certain hench alien in MIB, tong sui refers to any sweet, warm soup. We didn’t grow up with a nice cake or pie after dinner. Instead, we usually had a bowl of clear soup – some kind of vitamin tonic that felt more like a chore to drink every night.

But for the occasional treat, my mom would make a big pot of sweet soup. My favorite was boiled down mung beans sweetened by rock sugar and thickened by tapioca. Coconut milk on top might have been a Vietnamese touch but regardless, essential. Other honorable mentions include black sesame soup, snow fungus soup, and dau fu faa, sweet and syrupy silken tofu, which you can always find at dim sum spots. 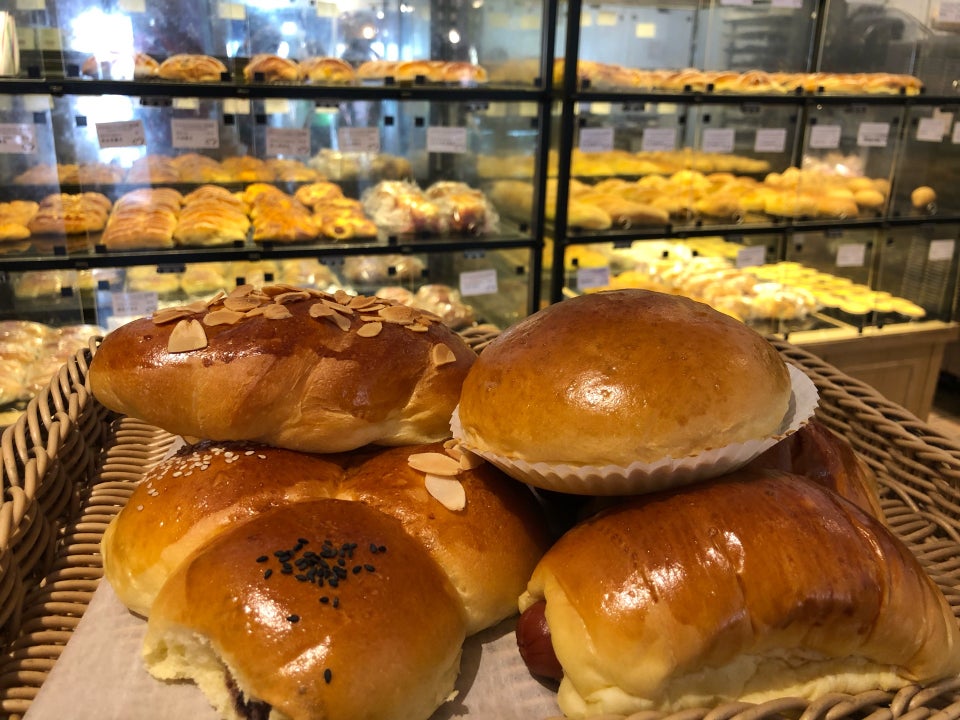 7. BAO
Can’t forget a good bao. These are the lil guys chillin in the warm cubbyholes at Chinese bakeries, or they’ll be resting in an overbearing stack of metal trays if they’re steamed. My dad would always bring home a big box of them every time he came back from Chinatown, and we’d fight over who got which one.

Choice cuts are hard to choose because there are so many – pineapple bun, pork floss bun, egg custard bun, red bean bun, lotus seed bun, spam and egg bun, roast pork bun, scallion bun, coconut cream bun – all warm and soft, with a rich slather of treasure in the middle. 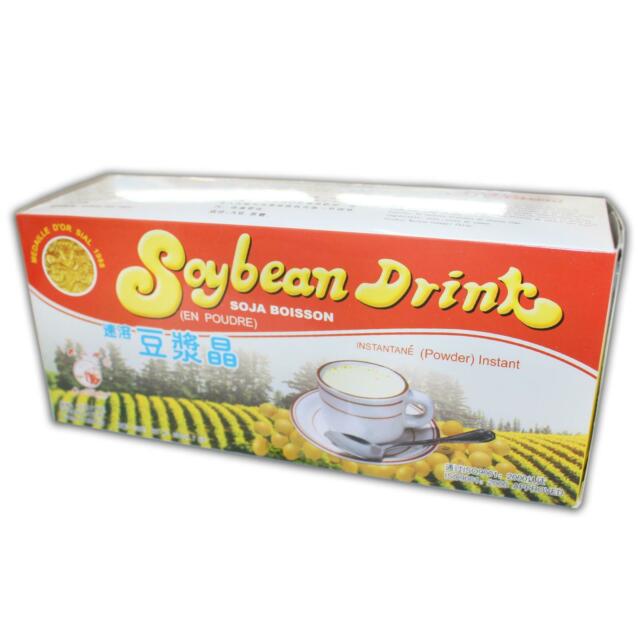 8. HOT SOYBEAN DRINK
Lastly, this glorious packet of powdered instant soymilk turns into a hot sweet drink after some good ol’ microwave power. Traditional or nah, my sister and I would fill our mugs of it with Cheerios and gobble it down with a spoon like proper Americans. Now that I’m allergic to soymilk, finding comfort in my memories will have to suffice.

You can attain all of this joy and happiness at your nearest Chinatown or in the comfort of your own home, as most of these delights are easy to make with ingredients found at your local Asian grocery store. For authentic recipes, I recommend Omnivore’s Cookbook and The Woks of Life, which has a lot of vegan ones as well. Hit up your local Chinese and pan-Asian businesses, which, affected by the pandemic and xenophobia, could really use the support now…. 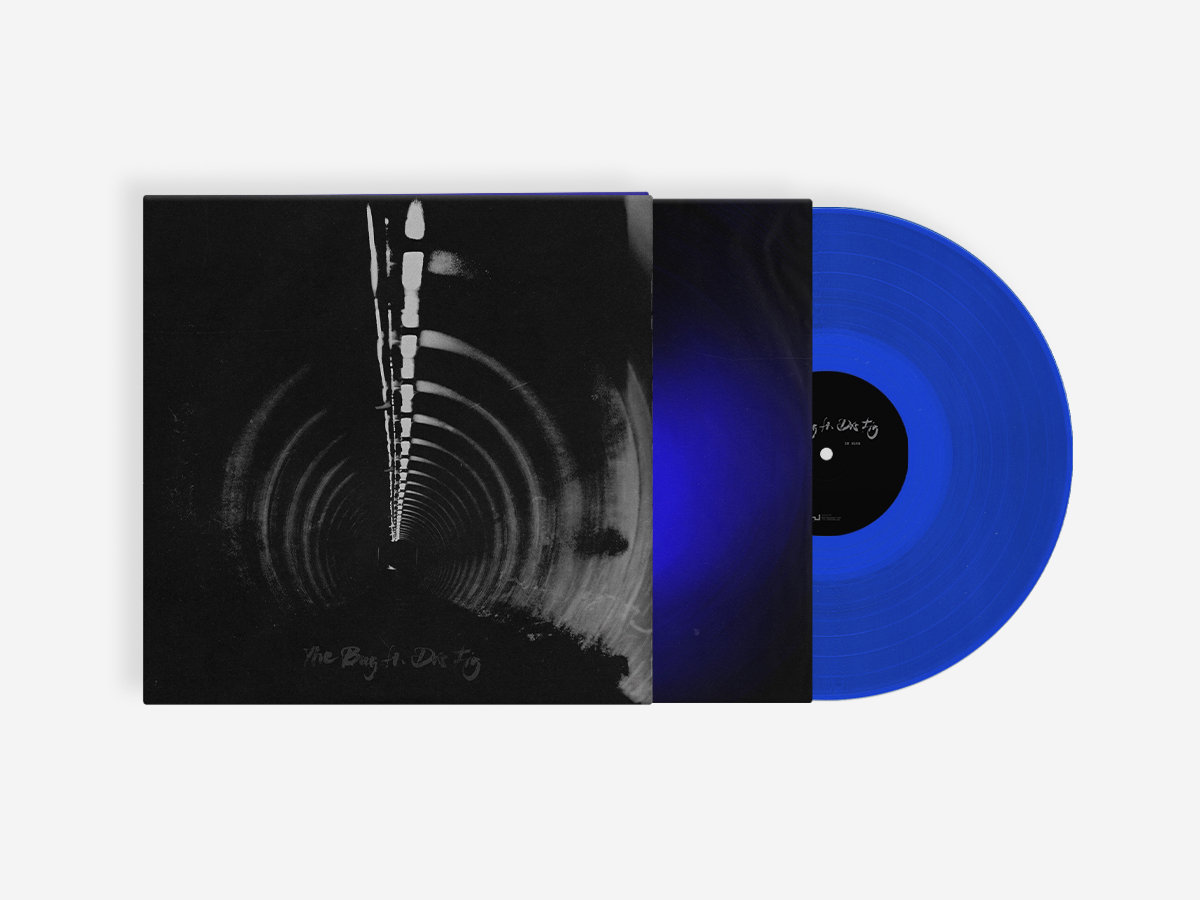 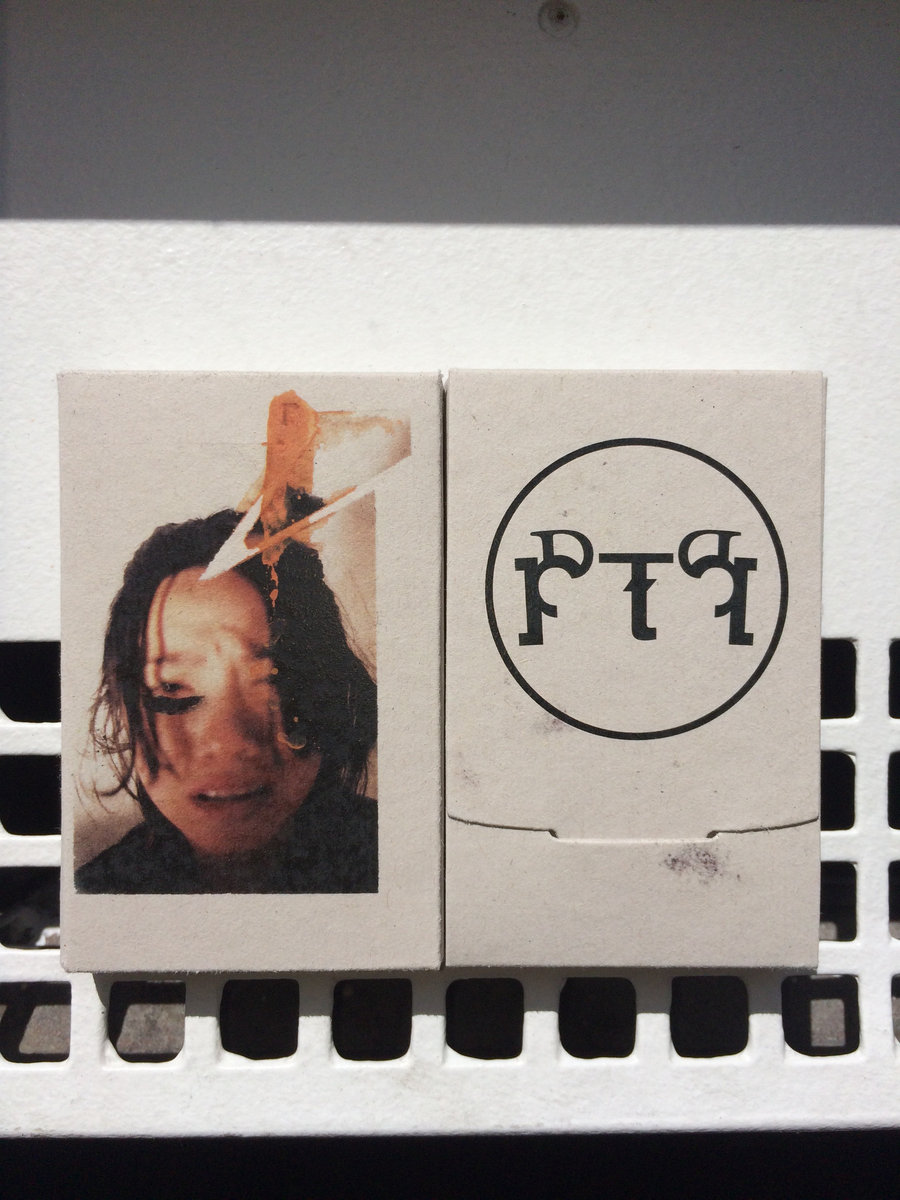