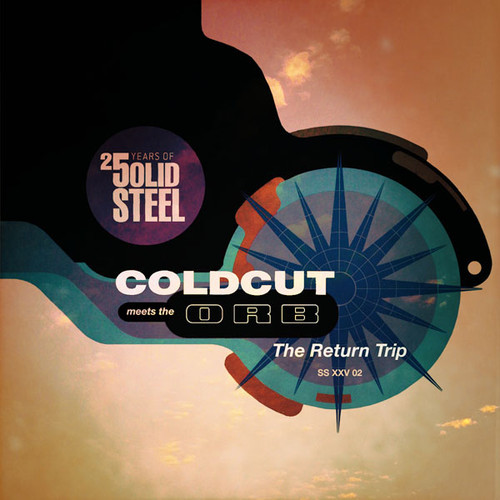 Anyone who grew up geeking out over the sampledelic stables of Ninja Tune and the selected ambient-house works of The Orb will have their minds blown by the following mix. The product of a three-hour jam session between Coldcut (Matt Black, Jonathan More) and the Orb’s core members, Alex Patterson and Youth–a.k.a. Killing Joke’s bassist and Paul McCartney’s better half in The Fireman–”The Return Trip” was edited into an airtight 120 minutes for Ninja Tune’s Solid Steel series, leaving a leading candidate for Mix of the Year in its wake.

Late last year DK and I were chatting on the phone about potential guests for Solid Steel’s 25th anniversary year in 2013. We were aiming high and had decided to ask any prospective guests for themed mixes or collections of tracks outside of their usual comfort zone. The idea of collaborations came up, maybe Four Tet and Caribou could team up or Aphex and Vibert? What and who would make people sit up and say, â€œholy shit, I HAVE to check that out?â€. Suddenly the thought bubbled up, why don’t we get a rematch between Coldcut and the Orb? It’s no secret that their original New Year mash up from the end of 1991 is very high up on my list of greatest mixes ever and the thought of a new sound clash 21 years later was very appealing indeed.

We put it to Matt and Jon, who loved the idea, and promptly contacted Alex Paterson and Youth. Convening at the latter’s Butterfly studio on the anniversary of JFKâ€˜s assassination the four of them, along with Coldcut studio accomplice Dor Wand, got down to it. The resulting session produced over 3 hours worth of material, Matt excitedly collaring me a few days later to rave about what a blast it had been.

He wanted an independent opinion on the results and I immediately volunteered to take on the edit job to sculpt it into the shape needed for a Solid Steel mix. Luckily they had recorded everything to multi-track and just before Xmas I sat down to construct a 2 hour show from the chinese puzzle in front of me. After sifting, editing, compressing and discarding over a 3 to 4 week period I finally had something to send the guys. Matt came over to the studio to run through some finishing touches with fresh ears and we now present 133 minutes of mind-melting madness.

In a time now saturated with mixes by everyone from the famous to the unknown to your mate’s mum it’s sometimes hard to grab people’s attention. This year we start off with something that we don’t normally do, we’re giving the entire show over to four artists to present one mix. To say that I’m pleased with the result is an understatement, not my contribution to the edit so much as what we now have because of a fanciful suggestion I made a few months ago. It’s a very different beast to their first excursion, how could it not be? 21 years is a long time and the whole mix is rooted in dub of all permutations, layer upon layer of sonics to pick apart including many unreleased tracks, versions or remixes by all participants. Lee Perry, Killing Joke, Sun Ra, William Burroughs, Teebs, Ry Cooder, Actress, Prince Jammy, Iggy Pop, Monty Python and Hank Williams are all in there plus probably a hundred more, some submerged, others strutting their stuff, you can have fun trying to guess who played what and who is who hiding behind a pseudonym. We haven’t included all the spoken word samples in the track listing because it would just get way too confusing but you’ll hear John F Kennedy, Hal 9000, William Burroughs and more swimming around in there.

All we’ve got to add to that is one simple word: enjoy…