DOWNLOAD THIS NOW: Lil B’s NYU Lecture, Set to Ambient Music By E*Rock and Translated By a Speech Synthesis Program 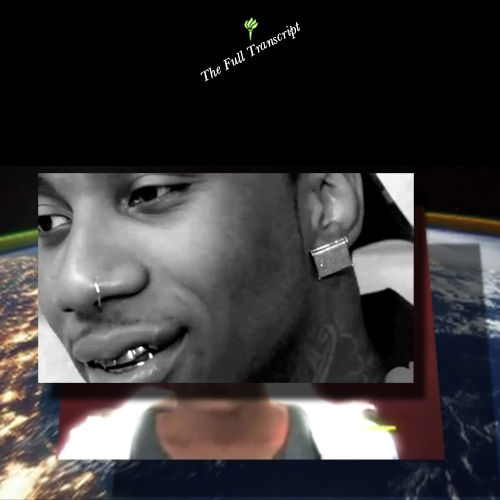 Props to Despot for pointing out the following ‘mixtape’. Cut by E*Rock–the brother of Ratatat producer Evan Mast–it’s a speech synthesis translation of Lil B’s NYU lecture, set to an ambient backdrop that’s as surreal and free associative as the rapper’s actual words. Grab it below alongside E*rock’s explanation of the whole project…

While checking my email I was happy to discover that The Fader had posted a full transcript of Lil B’s recent lecture at NYU. It was four pages from roughly an hour and half lecture, so I copied the transcript into a speech synthesis program to read to me while I was working on the computer and also listening to new recordings by Regular Music. The mix of Lil B’s slang and sentiments as the synthetic “Alex” computer voice over Regular Music’s new/old pastiche of technology was a complimentary, post-post modern mix that I found to be an equally enjoyable and strange listen, as well as a somewhat appropriate format to absorb the lecture.

The fact that we are even aware that Lil B exists is a product of our relationship to the internet. Starting with his onslaught of Myspace profiles and constant youtube videos, we know him through sheer brute force internet output, like Master P selling his mixtures out of the back of his car, Lil B takes his wares to the streets of the internet. This relationship to the net has perhaps been a factor in evolving his attitude from beyond rap’s braggadocio tropes and embracing a post-ironic positivity and motivational empathy. By the time I finish mixing the audio in Ableton Live I’m talking on chat to the rapper Despot, who was at the lecture himslef. He expresses annoyance with the fans that are there who treat him as a sort of Godlike celebrity and simultaneously as some kind of golden retard. The fact that the lecture is happening is a bit confusing, but Lil B puts his heart into what he does and manages to transcend, through sheer will power.

*This mix is also a sequel, of sorts, to the “Whisper Song”, Mac voice meets hip-hop video piece, that I put together years ago as a product of a Cory Arcangel lecture at The New Museum. I hope you enjoy it as much as a conceptual piece of music as well as reflective pop. (http://vimeo.com/7171953)