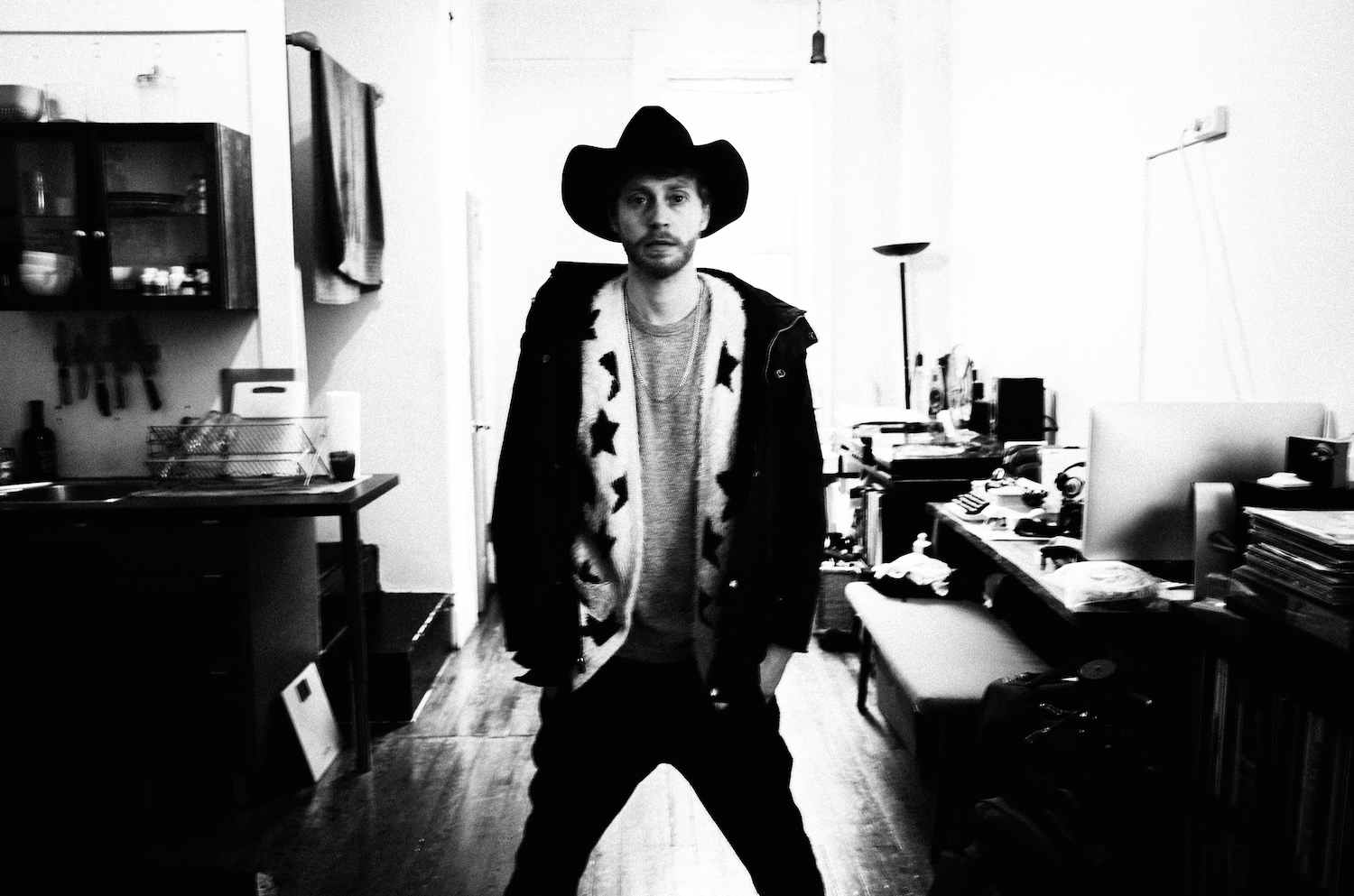 Welcome to the track-by-track breakdown of my new album The Crystal Cowboy (out this week via Planet Mu). I often find these pretty painful so I will try and keep it light and fluffy and full of the good shit you crave…

“WATCH A MAN DIE”
This track had to be number one. Something about the piano intro felt like it set up the tonal quality of the entire record perfectly. The last few seconds of “Sykle,” the final track, are also just piano. Bookended that shit. The string sample instantly gives it that old LTJ Bukem feel, or any nostalgic rave moment of your choosing. I personally think of the breakdown in that Orbital (?) track on the rooftop scene in the movie Hackers. Hack the mother fucking planet.

“TIME MACHINE”
Truth be told, I didn’t exactly want this on the album at first! But with every record there is always one or two which I am persuaded by the label to include. And as always I end up being grateful because it works. It just works. I’ve gotten some good early feedback on this track and its functional and less esoteric then a lot of my recent joints. To the untrained ear it sounds like a hardcore track, but if you listen closer you hear breaks from much later jungle tracks. Old hardcore tracks used to have like seven breakdowns—all different. Made them hard to DJ sometimes with clashing melodies and samples. I really just wanted a functional joint which now I can’t stop saying. Functional Joint.

“ANGEL FLESH”
Do do dooooh, do do doooooooh… The most egregious sample on the entire album. I originally wanted the album to be jungle and hip hop; it mostly stuck to that structure and this is one of the two raps on the LP. I get this surging feeling of ascension during the build ups, and played a lot with the phasing of the vocal sample. It creates this swell in volume at moments which is cool because on a decibel reader it wouldn’t reflect the change in volume. In fact it may look like it ducks the energy from the entire track, but with good phasing you can suggest volume changes that only people can hear and machines can’t register. It’s subtle, and freaky. “GREEN TECHNIQUE”
It’s fun to watch people try and find the “1” in this track. Feels like old school FaltyDL to me. The guitar sample is from some Pink Floyd record, when I was staying at this creepy, shitty hotel that overlooks the Battersea power plant in London—the one on the Animals album cover. Played the track as I was packing my shit together and some lights went on in one of the towers as the song came on. This is the other track I didn’t want initially to appear on the album. I took that light as a sign it was OK. It is all going to be OK. Even after they turn the whole thing into condos.

“WOLVES”
I see all of my music visually as I create it. I see the narrative and all of the players involved—the backdrop, the arc of the protagonist, the moral of the freaking story, man. “Wolves” is all of that for me. Good vs. Evil. Triumph of the human robotic spirit. Fall from grace, pick yourself back up again and conquer that bad habit. I really hope someone hears this track and feels empowered to take back what is theirs. I’ll keep it vague because I most certainly don’t want to ruin your imagination. My words can only cheapen your interpretation. At least I think that is correct in this case.

“HYENA”
The album was almost 16 tracks with half a dozen interludes. This track is the only survivor. At the last minute, I said to Planet Mu, “Hey, fuck a 65-minute LP; let’s make it 40 mins and straight to the point, no filler.” If you think this is filler, you may also be a Republican. Expand your mind for a moment and take in the entire LP and join the dots.

“THE CRYSTAL COWBOY”
This is secretly a Love song for someone. The growing growling baseline is me putting my foot in my mouth, and the Rhodes sample is my Love. We fight sometimes, and we make up. It’s life. I have friends in very stable, quaint relationships that bore the shit out of me. Truth is every track I have ever made is me working out my anger or happiness. Usually some bizarre combination of the two. I play trendy London nightclubs on line ups full of kids playing “tracks” or functional joints; I try and put a little more of myself on the line when I DJ. Take a risk. The more you put out there, the higher the possible gains.

“ONYX” (FEAT. LE1F)
Le1f and I are working on a record that quite frankly may never get finished. In fact this will be the last time I ever mention it unless it gets done. He turned in an incredible rap but it just didn’t fit the vibe of the rest of the LP; it fucked with its flow. So I made a bunch of edits and we were both happy when I made a weird version where he just randomly counts to 5. It is what it is. I think Le1f is an enormous talent. I can’t wait to watch his career grow and surprise all of us many times.

“THE HATCHET”
Actually, to be fair there were three tracks I wasn’t sure about for the album. This was one of them. It’s harsh sonically. Not something I haven’t explored before, but I think the delay I set on the drums really builds nicely and fucks with the 4X4 patters of yore. I hate boring repetitive dance music. I actually love it and have a hard time making it.

“BLUEBERRY FIELDS”
This and the last track are my favs of the album. This one just builds and I did some synthesis on this really accurately. Pulled out a bunch of stops and got it right I think. I don’t know if writing tunes is a waste of time when I really wish people cared as much a I did about them. It’s a frustrating game this music thing. Hot one second, cold the next. So when I feel like, “Holy shit, I have just made my best fucking track ever,” my next thought is usually, “Yeah, well six people may hear it.”

None of this would be an issue if I hadn’t spent every day of my life for the last 10 years worrying about this and working harder and harder all the time. I don’t take vacations, or breaks for that matter. On album release day I usually try and make about three tracks. There is no end goal; it’s legacy and freaking yourself out with making things you didn’t think you could. I really did that on this album. I’m so proud of the fucking music. And watch it get shat on.

Check out a complete archive of Drew Lustman’s work under his own name and FaltyDL here, and an exclusive interview between the New York producer and Squarepusher later this week.