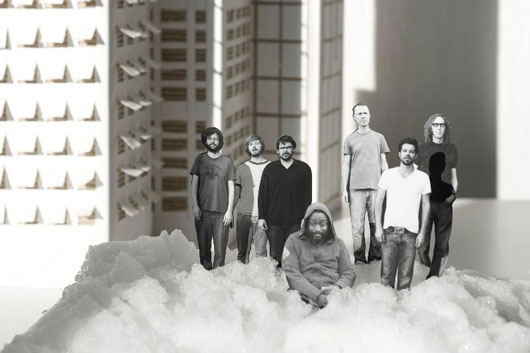 Like the best LPs from their better known projects (Subtle‘s A New White, the Notwist‘s Neon Golden, cLOUDDEAD‘s Ten), 13 & God‘s second album blurs the line between fractured electronic beats, scratchpad-seasoned hip-hop, and melancholic pop music. Since the digital version of Own Your Ghost drops today through Anticon, we asked Doseone (see also: Themselves, a he’s-the-DJ-I’m-the-rapper duo with Jel) to crack the code of its 10 very different tracks, from the “posse-lullabye swag” of “Its Own Sun” to the “SpongeBob SquarePants hardcore rap song” that was scrapped in favor of “a Sesame Street Segway on methweed.”

This little number was the one song on the album that remained impossible to name. Valerie from Lali Puna actually named it in the end. Other than that, it was the easiest kid to rear. This song was born in [Notwist frontman] Markus [Archer’s] living room, with a laptop for a mid-wife, in between our two â€œtogetherâ€ sessions. He played the guitar and broke the words out from a larger chunk of lyrics we had worked on together in the first session. It is about as folk, as we will ever get. And its posse-lullabye swag made it a no-brainer for being first song on the album.

Every once in a while, Markus utterly freaks one of my poem parts. While I use poetic license to bend grammar rules, he sort of â€œbreaksâ€ the stanzas and only uses portions that strike him. Every once in a while, it makes a whole new lyric neither one of us actually wrote, like â€œyou’re blooding.” That one still gives me chills early in the morning.

I suppose lyrically this would be the â€œmoral of the story,” song fashioned around one of my favorite poems to date. We had to abbreviate it a bit to make a song one can go bang to. I used to do this joke on stage, like â€œyou put the it back in shit”; however mine was â€œyou put the ardent back in â€œretARD ENTertainment center.” Anyway, one night I was feeling surly and â€œyou can’t get the eat out deathâ€ popped out of my mouth on stage. The rest is history.

Musically, “Death Major” is a sister to â€œBeat On Us,” which was a Notwist song lost at studio sea. Martin [Gretschmann, a.k.a. Console] had made an all electronic version, and we forged it into this. We also pressed our singing and some key sounds to a dubplate and crazy ass DJ Jel cut them on the album. Lots of bells and whistles here, and “You Are Singularâ€ is all scratched in. Jeff also killed it with his Gregorian melody-making skills.

Someone said to me this reminded them of workout music. I like to think of people trying to â€œget perfectâ€ on stationary bikes, pedaling to this puppy; ignoring its inner anthem all the while. And it all ends with the hardest woman on the planet–Marilyn Hacker. I would wash your feet, and bring you things that wise men bring to baby saviors.

This is my baby; I think it’s all of ours actually, the one demo Markus brought to the first session. When I first heard him singing these words–with all their atypical song lyric nature–it was chillfactory.org. Hearing him sing such tangled descriptions in his â€œmoneyâ€ voice…I am a proper dork for that shit. And recording this one was an utter breeze. We all just played along with Markus ’til we found our parts. It had tons of gravity that way. Markus also made me do a scratch vocal to use as place holder, so I didn’t really know what I was singing yet. I was just doing a soft, sober, white James Brown thing, but we all loved the take, so it stayed till the very end.

And the â€œtic tic ticâ€ banging on shit is a direct bite of the mighty Efterklang, who does that live. I have wanted to steal it since they gave me chills doing it in front of me four years ago. Love y’all.

This was called “Tuba Song” for months. Jeff and I were bumping two Kings in a cipher while picking up the 3 M’s for a studio day, and there was this great tuba beat we all loved. So we tried it, and the next day the tuba sounded like total shit. We all hated it; it sounded like a SpongeBob SquarePants hardcore rap song.

But as we gradually melded it with synths, things began to bloom. Our motto for this song was “simplicity,” a ’90s rap feel with a pinch of winter on its bones. Micha [Acher] killed the strings and horns on this song; even when I heard the MIDI demo, I was all goosebumped up. Then we recorded it with the Weilheim string&wind gangsters. As I think back, this song was born in January–how cyclical. The end is a dancehall-feeling mistake made between a Micha Rhodes riff and my hacked Gameboy. It’s like a Sesame Street Segway on methweed.

My personal favorite. I could listen to this until my hair falls out. And of course I did nothing on it. Ha. We really wanted to make a â€œPerfect Speed II,” because the simple Jel beat/Markus singing thing is such a money shot. So Jeff made this beat while we finished another song in Weilheim during our second session. Then Markus added guitar and lyrics.

This was another song that just â€œfell toward the targetâ€; all we had to do was push a bit. And we were all bopping around during mix down. Some songs seem to survive the whole â€œlistening to it 1000 timesâ€ thing that music makers go through. This one has that glue for me. And again, we end it with a sovereign lady of death appreciation. Dearest Ms. Plath, death did not deserve you.

Truth be told, I wrote these lyrics watching an artist (to be named later) throw a hissy fit backstage at a festival on a 13 & God tour in 2005. He threw a broken television off his tour bus and air conditioning unit, then his German bus driver was like, â€œCool, I’m calling the cops” and we all walked up on him surrounded by cops, saying, â€œI’m sorry, I’m sorry.â€ And so on:it was poetry in motion. I simply did the pen work.

Five years later, we sort of fell into this â€œKraut-rockâ€ flavored groove happily–following Jeff’s sample lead, everyone started zoning out and enjoying the icy nice of precise and repetition. [Subtle’s] Jordan [Dalrymple] killed it on a broken koto he pulled off a wall and tuned with pliers. And Markus did da drummin’.

Another sister song. This poem came before its twin “Death Major” by about a day. It is testament to the wonder of inventions stacking up across all human breath and death. Musically, it was called â€œHippie Songâ€ for six months. Markus & Micha came up with the beautiful melody, but we all felt like it was so floaty and hippie. No one was quite sure what to do with it, so it went through a lengthy limbo before becoming its own short film–one that’s quite irreplaceable to the album. Micha wrote all the beautiful strings and horns, and we recorded them all in Weilheim. It really brought the movie out of the music, which was all things really needed.

This song was made by us live in the rehearsal room before our tour in 2005, but never recorded. We just wanted another banger for stage show fun time, and this song sort of happened to us. We first recorded it as a live band for Own Your Ghost. It was a great way to begin, like being jumped in a suburban version of the Crips; a bunch of boys punching back at themselves.

We took some care to steer away from the natural dancehall vibe to the beat, while still going for the neck-wrecking energy. We doubled Dax [Pierson]’s vocal melody with a theremin on the hooks. It’s so buttery and was the missing addition all five years this song went unfrozen.

This was the only demo we didn’t all make together. It was a Notwist song they never felt was right somehow. That’s ’cause it was always meant to be ours, I suppose. They had like seven or eight versions , no lie. The electric one became “Death Major,” as I mentioned before, but Jeff toughed this version up with his big beat fingers, and things instantly began to come together toward our sound. There are 1 million instruments on this song, some needle drops and the kitchen sink.

My favorite thing about it is the â€œrap candorâ€ to Markus’ writing. That’s how I knew it was for us–I can drop that in an Oakland cipher session with pride.

This was the heart and soul of our album since day one. It is Dax’s demo. Truth be told, none of us can correctly convey the complicated nature of working with Dax now that he’s quadriplegic. The constant â€œwinning backâ€ of his health is the single most brave act of human living I have ever witnessed. He embodies more strength than any gangster or strongman I have ever met, yet all to constantly balance a world of fragility. And like so, he remains ever victorious in a small sea of challenges. Dax is quite literally the proof in the pudding of the words we all sing on this record.

The recording of this album was very hard for all of us as a â€œgroupâ€ as Dax had a lengthy but full recovery from bedsores. Since he could not be in the studio with us while recording, we pressed on in Oakland with a sort of grateful heavy happiness, using Skype and laptops to have Dax “with us” as much as possible.

Watching all of us healthy men struggle with this beautiful complicated music–a song our best friend made without the use of his hands–still brings tears to my eyes. Once we all caught up with Dax, it became a wonderful song.

I am not a hopelessly hopeful man for all the right reasons, but when you can take the use of a man’s hands and such beautiful things can still pour forth from him, it truly does make me believe in things far more glorious than god-sized gifts after a good and timely death; it makes me believe in living people, and be happy to keep counting calendars. Well one person in particular:Sorry, not trying to pitch our inner workings to PBS here. I’m simply being honest–sometimes there is truly more to talk about than “what a song is made of.”

I hope you enjoy our art. We make it because we can; because we are meant to in the semi-grand scheme of making modern music for tired ears in otherwise trying times. We have become a very unlikely group of trans-Atlantic best friends bent on your listening pleasure. I hope you all find a bag of money in a city gutter while bumping these sovereign songs about life before death in a set of Dr. Dre and/or Lady Gaga â€œBeatâ€ model headphones made by Proctor and Gamble and Capcom.