NEEDLE EXCHANGE 026: An Exclusive Mix By … Kele of Bloc Party 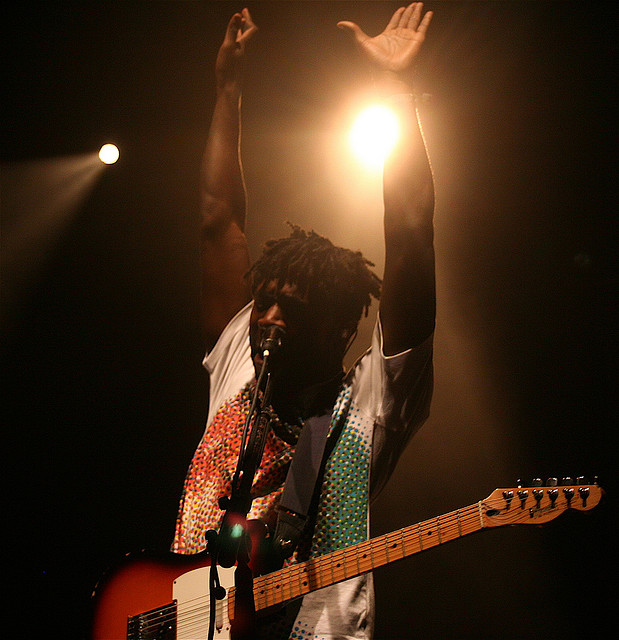 Now that Kele Okereke‘s synth-slinging solo album (The Boxer) is out, we thought we’d ask the Bloc Party frontman to file a ‘cray cray’ mix of his favorite ‘choons’. He fired back a stack of dubstep, shoegaze, Afrobeat, classic rock, hip-hop, neo-disco, even some BeyoncÃ©, Thin Lizzy, and Leonard Cohen. Here’s what he had to say about it all…

BeyoncÃ© – Get Me Bodied
What is there to say about her that hasn’t already been said? The best voice of her generation, the greatest dancer, she’s super hot, and makes the freshest sounding pop records in the world. My friend and I went to see her when she played in London, we were screaming like 14-year-old girls watching the Beatles. She makes all the other pop stars out there looks like amateurs.

Swervedriver – 99 Dreams
I bought this record when I was 15 years old. They were a massively underrated group and this album sort of slipped through the cracks. I think they had some label problems. In a parallel universe they would have been massive and played in stadiums. I haven’t heard any of their other albums but this song really stands the test of time, unlike some other mid-’90s guitar stuff.

Benga – Rockstar
I’ve been listening to a lot of dubstep lately and Benga really is one of the best out there. This track has a really great, brooding quality and makes me want to jump around even though it sounds like it’s half the speed it should be. When the bass kicks in it pretty much punches you in the face. He is in a brilliant new group called Magnetic Man with Skream. They’re a dubstep supergroup and I’m really excited to hear their album.

Fela Kuti – Alu Jon Jonki Jon
Some musicians play at being revolutionaries but Fela was the real deal. He really suffered for his art, and to have his voice heard. The album this record is taken from, Afrodisiac, is maybe his best work, although all his albums are great. The playing is so controlled but wild. It’s as heavy as any contemporary dance record.
Everyone should listen to Fela Kuti–the passion and power in his recordings is overwhelming

The Rakes – Work Work Work (Pub, Club, Sleep)
I saw this video the other day and it brought back the memories. The ONLY British band from 2005 that I actually liked. I’m sad that they split up. This track is a great bit of guitar pop with brilliant, dry lyrics that really ring true. I’m generally not a big fan of guitar groups but The Rakes were one of the best out there. We toured with them a few times and they were a proper laugh.

Major Lazer – Pon Di Floor
Diplo, Switch, lasers, dancehall, daggering–this has it all. It makes you want to get cray and lose your mind. Let’s all get cray!!!!!

Thin Lizzy – Waiting for an Alibi
One of Bloc Party’s road crew is a huge classic rock fan and got me into Thin Lizzy. [Frontman[ Phil Lynot was such a one-off, and this song is just mega cool.
There’s a great bit on their live album where he asks if any of the girls in the crowd have any Irish in them, then asks if they want some…

Leonard Cohen – Suzanne
I don’t go in for a lot of singer-songwriter type music but I love this tune. He has so much more panache than a lot of his contemporaries, plus he is from Montreal, which is one of the best cities in the world. I’m a big fan of Canada and Canadian music. There is so much creativity there, and it’s fantastic the way the government supports the musicians. Go Canada:

Holy Ghost – Hold On
New-New York disco at its best–so stylish and sexy. It makes me want to get fresh.

The Wu Tang Clan – Gravel Pit
I love the video, I love the song, and I love the vibe of the Wu. I head U-God is driving a cab now, which makes me really sad.

Previous PEEP SHOW: HEALTH Reveal Their Softer Side With “Drugs Beach”
Next Looks Like the Next Strokes LP Won’t Be Out This Year After All