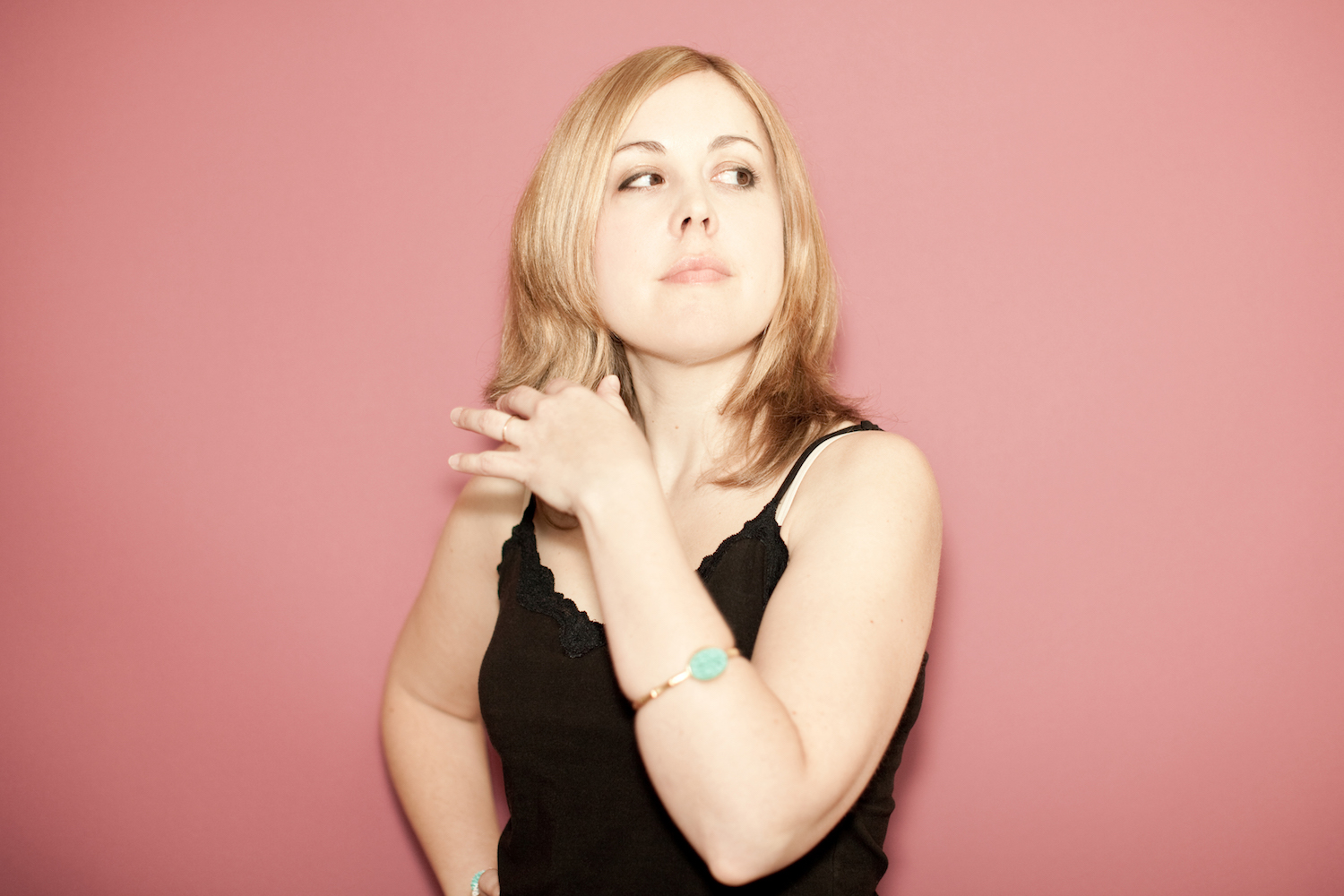 When Sleater-Kinney went on an indefinite hiatus in 2006, the reason wasn’t just the need to pursue other projects (Quasi, Wild Flag). For frontman Corin Tucker, her kids–a son and daughter, now 9 and 2 years old, respectively–came first, and the shape-shifting songs (The Corin Tucker Band) came second, when the singer/guitarist couldn’t hold the harmonies and hooks back any longer.

Since most people seem hung up on the same questions around Tucker’s 1,000 Years LP–especially the ever-so-popular “when is Sleater-Kinney reuniting?” –we thought we’d combined her two loves with a special Needle Exchange mix, a digital tape for our “cool parent” readers. You know, the kind that’d rather play their kids Joanna Newsom, Bruce Springsteen and the Magnetic Fields than Modest Mouse’s contribution to Kidz Bop.

Check it out below, along with a thorough interview about the transition from being a riot grrrl to actually raising one. Tucker–who launches her first U.S. tour in years tonight in Seattle–also left us with this one bit of advice:

“Ice packs. Kids fall all the time, so it’s good to have one in the freezer. A friend of mine actually gave me one called the Boo Boo Bunny. It’s an ice pack wrapped up with a soft bunny. It’s the most amazing present ever. Not only does it help the boo boo; it’s symbolic. Once the ice goes on, they suddenly feel better.”

Since you’re all bringing kids with you on tour, are you going to have a pen for them to play in attached to your van instead of a trailer?
Well, no, but we have a nanny that’s coming with us to help and we all have our own hotel rooms.

Right on. Well, thanks for putting this mix together for us. Are these all songs that have proven their worth with your kids over the years?
The mix is made up of songs I think kids in general would appreciate. My daughter really loves “The Unicorn,” though. She likes to sing along with that one. It gets super funny.

Is she singing on key already?
I can’t tell yet. She’s a little young for that, although she does have a great voice and loves to sing.

Is your son into music or art at all?
He does a lot of things. He was doing piano this summer, and he goes to an art-focused public school, which is rare for Oregon.

Funding for the arts is even worse there?
There’s zero support for it, and this year’s budget is looking really harsh for the fall, too. But his school is structured a little differently. There’s less money for the basics, but there are art, music and dance teachers, so he’s had a really great arts education.

It’s really unfortunate that the funding is so bad, especially since Oregon has a reputation as being a haven for artists…
Yeah, well, a measure called Measure 5 passed in [1990] that capped our property tax. That’s why we don’t have a sales tax in Oregon, and why we have tax problems here. Basically, the money that we used for education went away with this property tax law, and we’ve been in a hole ever since. When I was growing up here, I had a great public school experience, with lots of art funding and an awesome amount of extracurricular activities. Now, it’s just really hard being a parent with two kids who are going to be in a school system with no funding. It’s really a shame, so we’re lucky we found the one school around us that has [some arts funding]. But that also means that the parents have to work super hard during the school year to raise money for it. There’s all kinds of crazy fundraising work that we have to do. It can become a full-time job, really. So does that mean you’re doing bake sales and that sort of thing?
[Laughs] Well, when my son was in kindergarten or first grade, I helped organize an actual concert for his school called the Buckman Bash. I was fortunate enough to get some Portland artists to play that show, so we raised some money through that.

Who played?
Stephen Malkmus and James Mercer came down and donated their services. So yeah, there’s a lot of things you can do, but we’re definitely functioning in a crisis mode.

Is one of the reasons you decided to become a stay-at-home mom that you wanted to be there for your kids in that way–to teach them the arts in ways their school may not be able to?
Yeah, [my husband] Lance and I both try to bring art and music into our parenting, as well as a lot of cultural experiences like going to museums. The education your child gets can be a really rich experience but you still need to search out opportunities for them. You can’t just think, ‘Oh they’ll be fine at public school.’ Unfortunately, it’s not going to have everything they need. But you can’t expect your kids to learn everything from a classroom.

Do you have a lot of instruments around the house that they can pick up and play at any time?
We do. My daughter’s funny. She’s only two, but she’s already carrying around this acoustic guitar. She doesn’t really play it. She just thinks it’s cool, so she’ll hold it and strum it for a little while. So that’s really awesome and cute. My son is actually playing piano and reading music now, so there’s some stuff happening.

Is your son aware of how cool mom is in the eyes of other people?
He thinks I’m incredibly uncool. Our son is 10 times cooler than us, and he lets us know that on a daily basis. [Laughs] He was just born a really cool kid.

Like he emerged from the womb with sunglasses on?
Exactly. What mom does is “mom’s thing,” which competes with their time and things like laundry and making dinner. That’s just the territory that goes with parenting.

Is parenting what you envisioned it would be when you were younger? Or is it like nothing you could have imagined?
Pretty much that. When our son was born, he knocked the wind right out of our sails. He was also born prematurely, so we were really worried about him when he was born. That whole experience was pretty much the most dramatic thing I’ve ever been through. I just had no concept of how much I could love another being on this planet until he was born. It was so overwhelming…completely overwhelming. Plus your life suddenly became all about this one other person…
Yeah, your whole concept of life is turned on its head. But it’s been so wonderful to just be able to give all this love to happy, healthy kids who simply want attention. In the end, it’s not all that complicated compared to other relationships you may have throughout your life. It’s time-consuming more than anything…

Being an artist practically requires someone to be egocentric. Did you always want kids?
Yeah. I’m a maternal person in general. I’ve mothered my friends, and the people around me, since I was young. It can be pretty obnoxious, actually.

So were you the one ruining everyone else’s fun on Sleater-Kinney tours?
[Laughs] No, I like to have a good time, too, so I pretty much did all of the things you’re not supposed to do in my twenties. But yeah, I’m the kind of person who’s always saying, “Are you wearing sunscreen?”

Are you an overly protective mother too? Like do you let your son watch R-rated movies?
We’re pretty strict with things like that, because stuff that’s meant for adults can be really disturbing for kids. Things that are even borderline have so much sex and violence these days, so we really try to keep it to a minimum. But it’s hard, even with something like that Futurama show. It’s a cartoon, but there’s definitely some stuff happening in there where I’m like, “This isn’t appropriate! Turn it off.” So yeah, it’s a challenge.

What’s something all of the other kids were talking about but you wouldn’t let your son see?
He always wants to play that game Halo. Like most kids these days, he’s really into video games, and we let him play them for the most part, but that Halo game is totally rated M (for Mature) and militaristic. All of those games are. They’re like commercials for the army. The same thing with those Transformers movies.

I don’t know. I kinda liked the Transformers cartoon and don’t remember it making me want to join the military…
Well, the cartoons are fine, but those Michael Bay movies? My son knows the way I feel about the military. We talk about it all the time. But yeah, there’s a lot of negotiations when your child gets older. My son’s a great kid. He’s just really honest. We’ll fight about the rules, but he’s not going to go behind my back with something.

Well, alright then. Shall we get into these songs?
Sure!

Bruce Springsteen, “Froggie Went a Courtin'”
This is just an awesome, terrific song. I liked it as a kid. I actually had it in a songbook called Songs For Kids. It’s just great imagery for kids–there’s a frog, and he’s courtin’ a mouse, and there’s a toad…It’s just like, “Wow,” the way it makes fun of the adult relationships you see as a kid and how silly you probably view them.

Patti Smith, “Dancing Barefoot”
I thought the kids would like this one because they’re always dancing around barefoot. It’s also just a beautiful song. Patti Smith was a big influence in making this [Corin Tucker Band] record. Her book Just Kids came out while we were making it, so we talked about it all the time; about her struggles as an artist and the music that she made. It’s really inspiring.

Reparata & The Delrons, “I’m Nobody’s Baby Now”
A couple of these songs just have “baby” in their title. This is a good one because toddlers are always like, “I’m not your baby! Wait, I am your baby!” There’s a lot of identity crisis stuff happening, a lot of rebelling. Like my daughter’s new thing is to say, “No way!” all the time.

Joanna Newsom, “Bridges and Balloons”
This one helps when they’re having temper tantrums.

Joni Mitchell, “California”
We’re driving to California in the first leg of our tour, so I thought this would be a good one to include. I also really love this song. Her voice is so incredible and crystal clear, and her melodies are so interesting and different than anyone else. Just a total original.

The Irish Rovers, “The Unicorn”
My husband found this song rather randomly. It’s my daughter’s favorite right now.

Barry Louis Polisar, “He Eats Asparagus”
This one’s funny. It’s from a ’70s kids record, and about the kid next door who does everything right, including eating his asparagus. And then at the end, you find out he’s really 34. This whole record (I Eat Kids and Other Songs For Rebellious Children) is pretty incredible. The lyrics are really out there, and nothing that the P.C. parents of today would approve of.

Cinderella, “Baby Baby (I Still Love You)”
Yep, it’s another song with baby in the title.

Previous I WAS THERE: Gayngs Funks Up the Music Hall of Williamsburg
Next DOWNLOAD THIS NOW: No Joy, “Heedless”