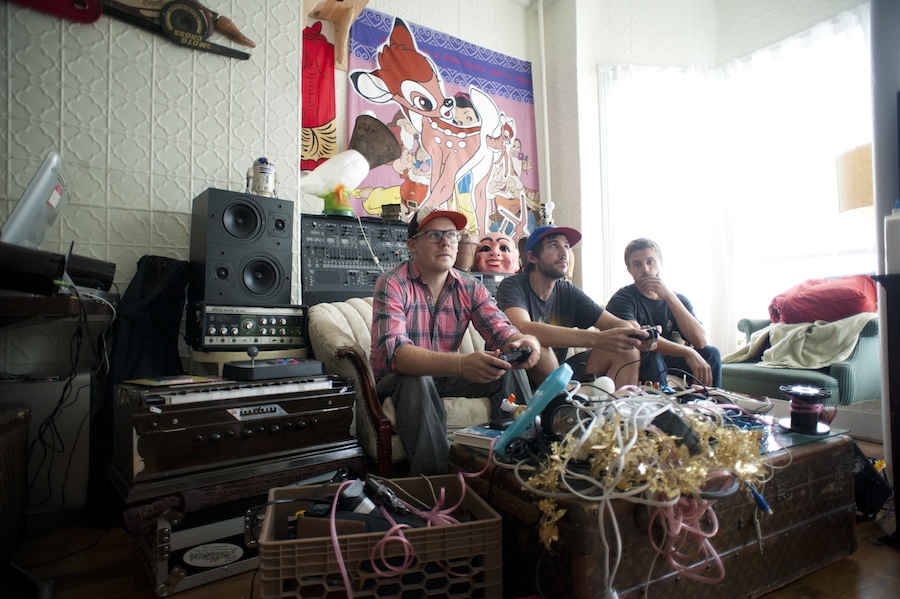 We love all of the artists who’ve ever graced our Needle Exchange series, but the entries from ‘real DJs’ are few and far between. Which is fine–in the scope of dying art forms, mixing is about as appreciated as actual albums in the Year Of Our Lord iTunes. That said, proper LPs and mixes leave us with a tingly feeling no MP3 can replicate.

So it’s with that thought that we present 60 manic minutes from Win Win. Rather than pull a long-buried session from one of their overloaded hard drives, XXXchange, Chris Devlin and Ghostdad delivered a dustup between unreleased exclusives, swift snippets of psych, GZA, Panda Bear and Radiohead, and at least one Charlie Sheen sample.

self-titled: First off, how would you describe Win Win to anyone that’s not familiar with the project, and how does it compare to your past work, both as XXXchange and with the other guys?
It’s a little more free-form. I think we were making a conscious effort to avoid going with any one genre or style for the album. Basically to develop each idea to fruition without worrying too much if they all fit together. I think we ended up with less filler this way than if we started out saying, “Okay, we’re going to make a rock album,” or, “Okay, we’re going to make a dance album.” It’s much more about the individual songs, I think. Maybe in the future, it might make more sense to do singles or EPs.

When did the three of you decide to form Win Win, and what was the original concept of it?
It started out as my solo record, but I knew I wanted to work with some other musicians to help get the ideas flowing. Me and Chris [Devlin] and Ryan [Sciaino] did some recording sessions up in Boston, and it was pretty fun. The music was going good, so we decided to make a new group instead.

To anyone unfamiliar with Chris and Ryan, how would you describe them as people and artists?
Chris I’ve known since I was 15 or 16, we both met Ryan more recently. Chris is sort of the creative wild card in the group. He’s always doing experiments and coming up with weird noises and textures and things. Ryan’s a good multi-instrumentalist and he’s also handy with computers and techy stuff. He wrote the video software that we use live.

How would you describe the dynamic between the three of you?
Ryan’s the sex symbol of the group.

The video teasers for this record have been rad. Did all three of you have input on those, or did Ryan just run with them?
We’ve been working on a DVD mixtape thing for the last year (it should be out this month!), so some of the footage is stuff from there, and some stuff comes from our live show. Ryan pretty much just does them and then we’ll reign him in if it’s getting too crazy or whatever.

You worked with several vocalists on your record. Did you give them any guidance in terms of the record’s themes, or did you send them tracks as instrumentals and let them write the lyrics based off that?
Pretty much everything started with instrumentals. Then when we got the vocals back, we tried to refine everything and build the tracks around the vocal. Theme wise, everything just sort of fit together naturally. We definitely weren’t giving people directions for what they should write about.

Tell us a little bit about some of the guests on the record. Why did you tap them for these tracks in particular, and what do you like about each of their own respective records?
With Alexis [Taylor] and Lizzi [Bougatsos] both, I just really like their lyrics. Liz is pretty singular, too. There’s not really anyone else out there doing anything close to what she does with her melodies and her voice and everything. Blaqstarr’s like that as well–nobody’s really doing what he’s doing. He kind of has his own little niche. Luckily we got to work with people we’re really big fans of.

The vocals were used as an instrument in the structure of certain songs. Did you head into this record not wanting to do a simple verse/chorus type deal with your vocalists?
Our whole idea was to execute each piece of music in the most natural way possible, so there’s really a big range of different structures on there. I’ve been doing lots of stuff lately with really tight pop song structures, so it was nice to kind of stretch out a little bit and try some different things. It was a big relief, actually, to work on a project where not everything has to have a huge chorus or big breakdowns/buildups and stuff like that.

How many months of work went into the making of this album? When did you start and when did you finish?
We were working on it in our spare time, so it actually took really long! I started in fall of 2008 and we finished in summer of 2010. Hopefully the next batch of songs will go a little quicker!

People have no attention span these days. If you could point someone to just three tracks on the album, what would they be and why?
Probably the three singles (“Interleave,” “Victim,” and “Releaserpm”). Pretty much everyone who hears the album really likes one of them. Structurally, those three are basically pop songs.

The whole attention span thing is a theme of the record right? How do you feel about that personally? Do you find that it’s hard to pay attention to any one thing yourself?
I tend to find a couple things that I really like and just latch onto them. But it’s hard with all the information out there. People move through things so fast! I’m still stuck thinking about, like, Justice and stuff that happened four years ago. I don’t feel like I’ve digested that yet.

I assume you all have really different listening tastes depending on the day, but what are some records you guys played for each other during the making of your album, as either a point of reference or simply because you dug them?
Soulwax was a big one for us during the making of the record. Chris was also bringing in cool psych stuff. If you listen to something for six months straight, it’s gonna rub off on the music that you make whether you want it to or not.

What are some non-musical influences on this record? How about some musical ones that aren’t obvious simply by listening a couple times?
Personally I was checking out a bunch of collage art. I also went to the William Kentridge show at MoMa a couple of times. That guy had some really interesting process things that he was doing. It’s fun to think about stuff like that, but applied to a musical context, especially now that we work with audio in such a visual way. Now you can really think about it as something plastic that you can almost sculpt.

You got asked to do a Black Eyed Peas remix, but they didn’t end up using it. Has that happened a lot with major artists–where they asked you to do something for them, but then they were surprised by what you sent back?
In the past, yes, but lately it’s kind of the exception. I’ve gotten a little better at asking people what they want before I start in on a remix.

Can we expect more remixes from this record? How about future Win Win material?
yes! We’re actually doing one of those Scion remix compilations for our song that features Blaqstarr, “Victim.” I think that’s going to come out at the end of the month.

Now that this record is done, do you feel inspired to do more of your own music, or to shift the focus back to DJing and producing other artists?
I really enjoyed doing this, so I think we’ll try and get another release ready for the end of the year to keep the momentum going. it may not be another LP, but I think we’re definitely going to try and do something. We’ve got another really good psych song that Naeem [of Spank Rock] sings on.

Speaking of producing, if you could sum up your studio experience with the Kills in a few sentences, what would you say? What about your work on Kele‘s record too?
I walked into the middle of producing that Kills record. There was another guy who did all the pre-production with them, but he quit on the first day of actual recording. So the stuff that I worked on with them was more like trying to find some cool drum sounds that could work. Or like figuring out what other sounds we could fit in that would work with their minimal thing. We recorded a bunch of live drums and then sequenced them. Or I would give Jamie [Hince] some better sounds to go in his MPC.

Kele’s album was done suuuuper fast. Probably six weeks from front to back; maybe another week of mixing. He would send me Logic demos, then we’d finish them together. Honestly there wasn’t a lot of time to think about what we were doing, which was kind of fun–just going with your gut instinct.

Can you tell us a little bit about the mix you did for us–some of the artists, why you picked them, any theme the mix might have, etc?
Devlin: The mix starts with some new songs, and some stuff [XXXchange] and I were thinking about when he was getting his TV on the Radio remix together.
XXXchange: It was Chris’ idea to do a dancehall remix for them actually. I think it turned out really well. Since I hadn’t done too much stuff like that before, we went and downloaded a bunch of Top 20 dance stuff from Jamaica to use as references.
Devlin: Then it gets into some older psych songs. The sound experiments that happen in psych songs was pretty influential to our recording process, so I thought it made sense to put a bunch of this on before “Cada Buen Dia” came on. It’s one of the stranger songs on our record. After that there’s some Moombahton, which the three of us really like.

XXXchange: Yeah, it’s kinda trendy, but we really like it. Unlike the last couple blog-house/electro trends, it’s at a more sexy tempo, so It’s really playable in a wider variety of situations.
Devlin: There’s a section of ska records that all have vocal percussion…then some more new shit we like followed by a Group Home song and a GZA song I couldn’t get enough of in high school.
XXXchange: We were really into Group Home in high school. Wu-Tang too. Chris got me the bootleg Wu shirt for my birthday one year. Group Home was one of [DJ Premier]’s lesser-known projects that he produced. I remember there were some really crazy interludes on there, too, like little teasers where you wished they had made it a full song. The beats on there were so good.
Devlin: The first official Win Win remix is on here, too, followed by a little section of songs good for dancing, Panda Bear, and a really awesome Association song to close it out.