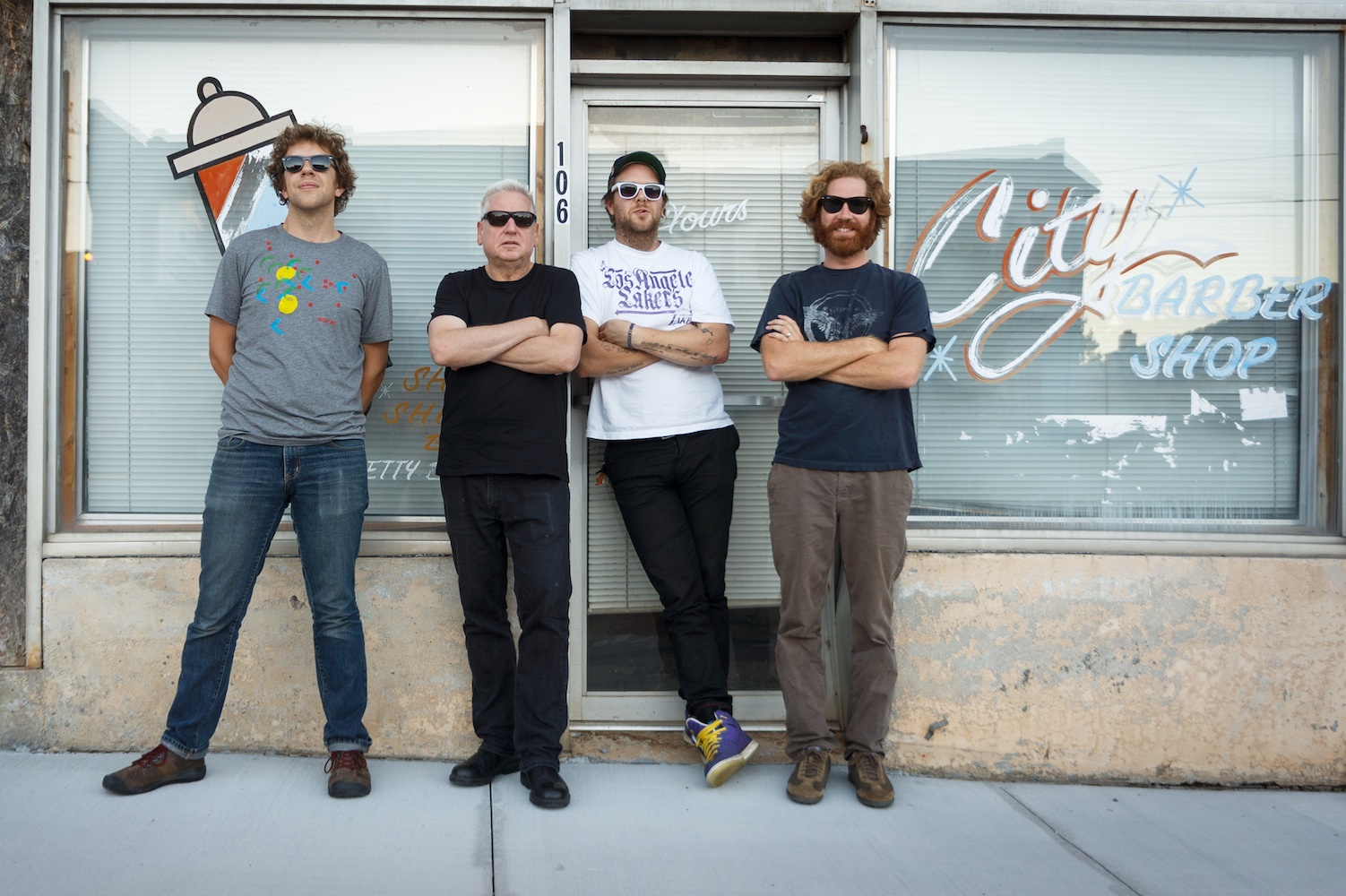 If RVNG Intl.’s cross-generational FRKWYS series had a longer incubation period, it might end up producing a record like Appalachian Excitation (Northern Spy). A straight-to-tape session between the psych-steeped folk band Megafaun and minimalist composer Arnold Dreyblatt—a student of Pauline Oliveros, La Monte Young and Alvin Lucier—its roots actually reach all the way back to 2008, when the pair spent a week studying each other’s techniques at Salem Art Works in upstate New York. Four years would pass before they hit an actual studio, however. Riding high from a collaborative set at North Carolina’s Hopscotch Music Festival, the quartet knocked out four trance-inducing tracks that blow right on by like only the best left-field LPs can.

“We are no longer one-dimensional people,” Dreyblatt said from the stage when he performed with Megafaun at New York’s Ecstatic Festival earlier this year.

No kidding; one listen to the tour van edits below—each one a reflection of the Appalachian Excitation record, as explained by Joe Westerlund—hammers that point home…

NEIL MORRIS – “BANKS OF THE ARKANSAS”
This is a selection from Alan Lomax’s Sounds of the South box set, which is a cornerstone in Megafaun’s creative existence. Neil Morris came from a family of folk singers and instrument builders, and was the father of songwriter Jimmy Driftwood. The sound and technique of this particular instrument is obviously somewhat akin to Arnold’s instrument inventions. In my mind, Neil and Arnold are part of the same lineage, both in terms of instrument invention and minimalist leanings.

JIM O’ROURKE – “THE VISITOR”
This piece is a favorite, and in regular rotation in the Megafaun tour van. A good portion of this music feels as if it were created spontaneously, and the rest highly structured start/stop structures and intricate rhythmic weavings. Definitely an example of where minimalist sensibilities and folk instrumentation can successfully converge.

CHARLIE PARR – “ADRIFT IN LAKE SUPERIOR”
Charlie Parr is an incredible folk songwriter/guitarist based next door to our home state in Duluth, Minnesota. We’ve had the privilege of touring with Charlie, which incidentally lead us to the Empty Bottle in Chicago, where we had also performed with Arnold in the previous year. It’s simply a very beautiful piece that utilizes similar bowing techniques to what’s used in Arnold’s music, and places it in a similarly meditative, tonal space.

TONY CONRAD & FAUST – “OUTSIDE THE DREAM SYNDICATE”
The holy grail of rock-meets-minimalism. We’ve spent many a late night and early morning with this one behind the wheel. So detailed, so dry, so raw. The dryness of this record was our main reference when discussing with Brian Haran and Jim Bob Aiken how we wanted Appalachian Excitation to sound.

GLENN KOTCHE – “MOBILE PARTS 1, 2 & 3”
Upon first listen, I was immediately drawn to Arnold’s music through his rhythmic sensibility; with all those polyrhythmic/metric sections that draw the listener into a trance, and then suddenly shifting, instantaneously transporting you into a new sound world. This piece by the great Glenn Kotche has some of Arnold’s rhythmic and structural ideas in common.

PENGUIN CAFE ORCHESTRA – “AIR A DANSER”
This was a track we reserved for our pre-show load-in. We’d blast it while pulling into the venue. You never know what or who you’re going to be working with in a new place each day. This piece always puts a smile on your face and bounce in your step, despite any grumpy or off-putting strangers!

MISSISSIPPI FRED MCDOWELL – “DROP DOWN MAMA”
Also from the Sounds of the South box set, the songs from which we’ve been using as a springboard for our own arrangements. One aspect of Fred’s music I appreciate is his willingness to drop into particular chords and just stay there for a seemingly arbitrary number of times. Listening to Arnold’s music provides me with a similar feeling of surprise and excitement.

TIN HAT TRIO – “HOLIDAY JOEL”
Sparse cross rhythms, modified piano sounds, light percussion and off-kilter intonation. With all the shifts in color and melody, it resembles what I’d imagine Arnold would sound like if he started writing pop tunes.

ALBERT AYLER – “TRUTH IS MARCHING IN”
Folk melodies set free of metronomic pulse. This music and Arnold’s share a reference and reconstruction of march music, but treated in very different ways. A demonstration of two differing approaches to the same tradition.

KEITH FULLERTON WHITMAN – “PLAYTHROUGHS”
Keith is a friend, inspiration, and a wealth of 20th/21st-century musical knowledge. This piece makes for some heavy moments, paired with a long mountain drive out west. Keith certainly shares with Arnold a similar affinity for resonance, though in a language all his own.

JOHN CALE – “SUN BLINDNESS MUSIC”
A contemporary of Arnold who spent a career investigating alternative resonances, and a raw document of a minimalist piece with multiple, contrasting sections.

WILLIAM BASINSKI – “DLP 1.3”
Another majestic late-night driving favorite…as long as we’ve got some coffee. Haha! A quintessential, electronically-based example of discovering something new by “playing the same thing” over and over again. I wish my line6 looper would sound like this if I took a hammer to it!