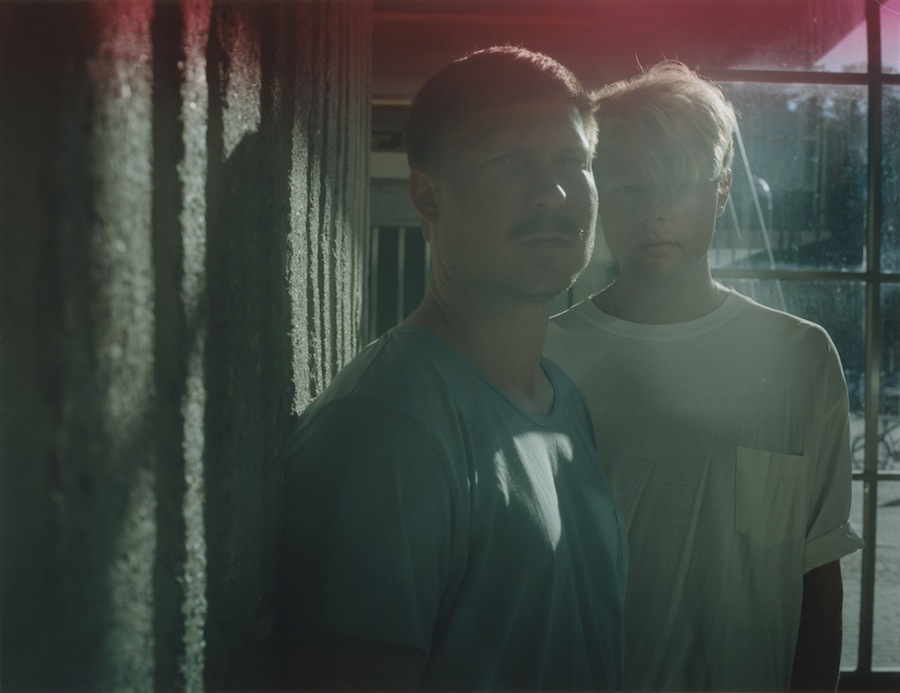 It’s easy to forget given the unseasonably warm weather we’ve been enjoying here in New York lately, but winter is a little more than a month away. And with that usually comes our need for bleak but beautiful music—steely synths, melodramatic drones, frosted folk…that sort of thing. On the other side of the spectrum are sun-stroked artists like Korallreven, a Swedish duo who delves into a soothing, deeply spiritual eternal summer sound on An Album By Korallreven (available now through Acephale). Inspired in part by Marcus Joons’ trip to Samoa, it’s the kind of thing that melts your melancholy away, and at the same time, revels in it.

In the following exclusive, we share Korallreven’s latest mixtape and speak to Joons about smoothie stands, working with Julianna Barwick and Victoria Bergsman, and “fun fun fun”…

“I wanted to stay forever, but I couldn’t stay more than a month”

To start, tell us about your mix–some of the songs on it, the mood you went for, etc.
At the moment we are listening to lots of UK rave from the early ’90s. So we simply tried to blend some of our favorites from that glorious era together with some of our favorite stuff from this year, like Zomby and Elite Gymnastics, which pretty much feels the same, right? So I guess that you can call it melancholic rave, or something. All just to show where we might be heading next.

You seem to spend a lot more time sequencing/conceptualizing your mixes than most artists do. Is that because you want them to be an extension of what you’re doing with Korallreven to some degree, rather than just a collection of songs?

Yeah, that’s it. It’s all about context. Just as in everything else we do. And we can feel that we truly belong somewhere and nowhere at all. I love when people react like, “What the fuck is this?”

How long were you in Samoa for? Did you visit it alone? How did it compare to your preconceptions of it?
I was living in Australia at that time. I had dreamt about going to the South Pacific since I was a child and saw a Swedish TV series called Villervalle i SÃ¶derhavet (Villervalle in the South Pacific). It’s a pretty weird 1960 series about a young blonde boy who—yep!—goes to the South Pacific. I thought for some reason that it was quite breathtaking and decided to one day head there. And I chose Samoa because it has the best name. If I would stand in front of a smoothie stand and there would be one called Samoa I would go for that for sure!

Most people don’t know the first thing about Samoa. How would you describe it there, from its people to its climate to its general vibe?
Even if it—like most of the places in the South Pacific—has endless summers, it’s not that touristy like Tahiti’s Bora Bora at all. It’s not an island that has been transformed into one big glass-encrusted shopping mall/resort/hotel. It just is. So, it’s more like a Jamaica in the South Pacific. The same rawness but much much smaller. And friendlier if you are a palagi (white). The capital Apia is not the most postcard-picturesque place in the world but as soon as you get to the countryside it’s a bit how the Jehovah Witnesses’ paradise must be like, just like another world. Just Google “Lalomanu Beach” and you will see. It was the purest magic and I wanted to stay forever, but I couldn’t stay more than a month.

How did you end up watching some of Samoa’s Catholic choirs? Do you have a background in choral music, or had you at least seen it performed before your trip?
Everything, and I truly mean everything, was closed down on Sundays so the only thing that you could do was to indulge in nature or go to church. And since I always indulged in nature anyway, I decided to dedicate those Sunday mornings to see what the Samoan Catholic faith was all about.

Did that music resonate you on a level that wasn’t so much religious as spiritual? Or was it just simply beautiful?
It was simply beautiful. I have always loved the idea of church music—that “now we all gonna sing so pretty that the Lord shall be hearing us, cry some tears and then give us a helping hand with our coconut milk production.”

Were you brought up Catholic or around any other kind of religion? Do you subscribe to any one belief system now or would you consider yourself agnostic?
I was not. Catholics are rare in Sweden. Might not be more than some hundred thousand or so. Actually, even though most people here are within the Swedish church, they don’t believe in it. It is just something cozy to be in, you know? So that you know how to do when you gonna be baptized and when you’re dead. We celebrate Christmas because of the gifts and not because Jesus was supposedly born that day. I don’t have a Christian belief, no. Seriously, I don’t have a clue why we’re here on Earth but why not try to have some fun fun fun now when we are here?

How soon after your trip did you start sketching the songs that ended up on your album?
Maybe two summers later. We started with the album right away and then we have released singles when we felt for it. The first songs we ever wrote was “Loved-Up,” “The Truest Faith” and “Honey Mine.”

You’ve traveled a lot beyond going to Samoa. Did any of your other trips inform Korallreven’s music at all?
Hopefully in a way that our music doesn’t sound like something that is recorded in a studio in Stockholm. I absolutely hate music that doesn’t take you anywhere.

How would you describe your working relationship with Daniel [TjÃ¤der, also of Radio Dept.] and how you guys relate on a more personal level?
Daniel is one of my dearest friends. We bring in ourselves, our minds, our blood, sweat, tears and shoegazeness and out comes something that makes us feel the pure ecstasy of what in popular terms used to be called “life.” It’s that easy.

Did you want to incorporate some guest vocalists from the beginning? What was it like working with Victoria and Julianna? Did they record their vocals separately once you sent them the music? Or was the process more collaborative/in-person?
It kinda just happened. I was living in New York last year and it just felt natural to ask my extremely dear friend Victoria who was also living there if she wanted to sing on some songs. And Julianna, I just heard her music somewhere and was totally blown away. It was just another level. Last summer I was really, really fucked up so the only thing that I could listen to to not fall apart in thousand pieces was her vocal loops. So it felt, once again, natural to ask her to sing on “Sa Sa Samoa.”

It’s interesting you chose to work with Julianna, as she grew up around church music and has a deeply spiritual sound of her own. Did you know about her background before working with her?
Nah, I did not. Guess that it would have been pretty angelic and make a lot of sense to hear her perform in a church though.

There are traces of many different genres in your songs, but no clear sound you can pin the album to. What are a couple albums that remind you of making this record? Maybe not ones that directly influenced it; ones that inspired the overall spirit of your sound?
I guess that we have succeed, at least when it comes to you, since we didn’t had any major music influences for the album.

What were some non-musical influences on the album beyond your trip to Samoa?
We rarely talk like that. I think that we just wanted to create some otherworldly experience when you feel as carefree and—haha—”as young as yesterday” as I felt when I was in Samoa and then it sort of just happened.

Is this the end of this project for now, as Daniel shifts his focus back to the Radio Dept., or are you already writing more Korallreven songs? Will you be performing live in the U.S. at all?
We’re writing new songs and yeah, hopefully we will come to play in the States in 2012. We have already got lots of offers but the time hasn’t been right yet. So, this album is hopefully only the beginning.