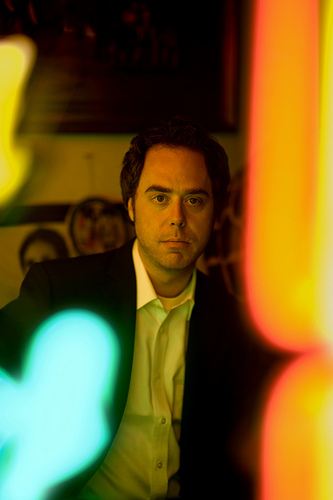 My new mix CD, Sound of the Police, features African-inspired music from around the world. Most of which are recordings from Africa, but I also wanted to illustrate how African music has influenced other music in other regions. For example, Brazilian, Colombian, and even American music. You can hear cumbia, samba, and even a touch of hip-hop in these selections.

Ever since I was in Ozomatli, I’ve developed a sensibility for these types of music. I’ve been collecting Latin and African music ever since. Even though my debut solo album (The Audience’s Listening) reflects a bit of my passion for these styles, I wanted to put something out that focuses entirely on it. As a music collector of all styles, I feel it’s important to share this with my audience so that they get a full understanding of why I make the music I do. This will help connect the dots from previous Jurassic 5 recordings to future recordings.

If I had to highlight records in this style of African/Latin-influenced music, I’d start with Mulatu Astatke. He successfully merged Ethiopian folk music with the Latin rhythms he brought back from New York while studying music there in the early ’70s. One of his earliest recordings exploits this very well. It’s called “Ebo La La.” Another would be his song “Asiyo Bellema,” a wonderful hybrid of Fania Records-style rhythms with Ethiopian sensibilities.

Another artist would be Colombia’s own Fruko. He’s probably one of my favorite salsa recording artists of all time. My favorite song by him would be “El Preso.” The arrangements are ever-changing and fun to listen to. It’s a must for any dancefloor with an audience that might suggest they are willing to go in that direction.

For Brazilian style of music, I’d say “O Telefone Toccu Novamente” by Jorge Ben and “Afro Sambas” by Baden Powell are my favorite. The romanticism of bossa nova meeting African rhythms makes a very powerful combination. Another example of this would be Belgium’s own Nico Gomez with the song “Aquarela,” a great song to dance and listen to. I felt it was important to show how this music wasn’t only exclusive to Africa and South America. These styles were picked up by other artists in other parts of the world.

Ohio’s own Dee Felice Trio with their song “Nightingale” is great rendition of Afro-Brazilian music. Done so well that I had trouble believing it had been performed by the same Dee Felice Trio that had been famous for doing recordings with James Brown.

African music has become so infectious and spread into other styles of music around the globe. These styles infiltrate and mix with the local music style and then change into a new style like American funk or Brazilian samba. The interesting thing is when these hybrid styles make their way back to Africa and the circle happens all over with Africa taking the hybrid that started with them and creating something new with it yet again. This is where we hear people like Mulatu at work.

We are already hearing African and South American-influenced electronic music (styles like reggaeton and Nigerian electro), so I’d like to introduce turntablism into this chain and see what comes back. – Cut Chemist