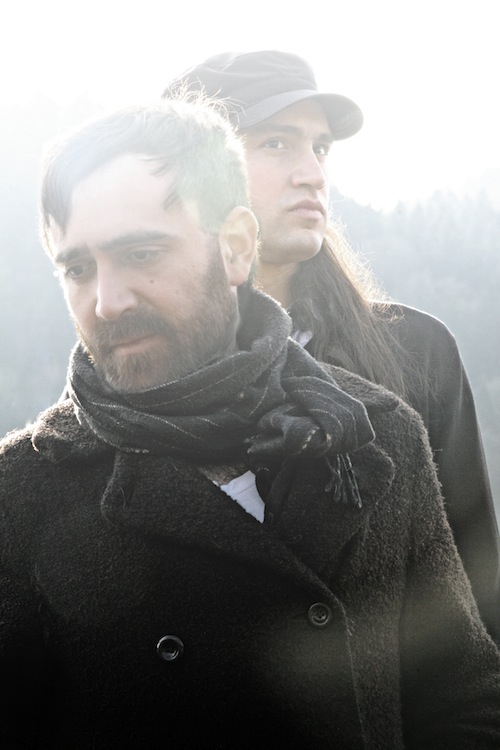 Some people complain about never seeing Nirvana or the nose candy peak of the Stones; us, we’re a little sore that we never succumbed to Yellow Swans. The undisputed noise circuit champions announced their retirement nearly two years ago, and while we’d heard their name spoken in hushed, reverential tones before, self-titled didn’t stumble upon the weight of their work until a few months ago. That’d be the very second we heard Going Places, a coffin-nailing collection that has absolutely engulfed our office stereo and subway routine in recent weeks.

As you’ll see in the following Yellow Swans guide–featuring six must-listens, hand selected by the guys themselves, Gabriel Saloman and Pete Swanson–their best music finds a delicate balance between sensory deprivation and sensory overload. And we simply can’t get enough of it these days… Going Places (Type, 2010)
Pete Swanson: An obvious choice for the list as it’s the record we’re promoting right now. I would include it on the list even if it hadn’t just sucked up a good portion of the last few years of my life. This record seems to be the furthest away from myself of anything I’ve been involved in. I have no idea how this music happened or where it came from. The record feels alienated and miserable. Complex textures of sound that seem as menacing as they are appealing. This record took forever, but it also felt like it made itself. I think that’s due to this being almost entirely live to stereo recordings with no overdubs or vocals. Once the editing was done, we both sat with the record for a bit, considering overdubs, and we both felt like it was good as it stood. I appreciate Gabe letting me name the record after a favorite Leonard Michaels story, and for letting the band wrap up on a joke that isn’t really funny.
Gabriel Saloman: As an introduction, I suggest catching up with the present. Going Places was recorded with full knowledge of our eventual split, so it is composed with something of a cyclical narrative. A return to bangers (of sorts)–we bring our own extrapolation of dub, minimal techno and lots of extended stasis; escalation; even some catharsis. The record sounds sci-fi to me, but it’s actually the result of feedback, guitar and lots of tape. Live During War Crimes #3 (Release the Bats, 2009)
GS: I’d say there’s a big difference between people who saw us live and people who only have heard recordings, at least in terms of how they understand what it is we’re trying to do. We played loud as fuck, but it was so that people could feel the sound waves and get lost in a state between over-stimulation and sensory deprivation. Almost all of our recordings were “live” with varying degrees of editing, collaging and overdubs. This is probably the exception, and it might be (at top volume) as good an example of what it was we “did”. Key moments in the last year of playing shows, including our last U.S. show in Chicago, which might be the best live show we ever played. Or not. Deterioration (Self-Released, 2007)
GS: A classic “process” album–a recording of material made in transition between studio and live modes that captures us around an edge. A celebration of tape. In a way it feels like a recipe for a lot of how we worked as a duo, taking melody and rhythm and making it almost illegible. I’ve read disparaging comments about the “computer” sounds of this recording–a common and very wrong assumption about our gear and process that we’ve had since our early CDRs. Even when we’ve used digital gear, it’s been plugged in wrong and run through our usual analog wringers. This is almost all guitar, tape, vocals and mixer feedback. Probably one of our prettiest albums even if it’s grimy as fuck. Live During War Crimes (Release the Bats, 2006)
PS: Easily my favorite of the “early” era of the band. There were muscular beats, sweaty shows and a sort of splatter-paint sonic aesthetic going on. While I think some people would beg to differ with me, I think this is our most unhinged, most aggressive and most intentional release of that phase. If there’s anything that we did that was industrial and hefty, this is it. These recordings were also from the first US tour we did and were the best stuff of about 30+ hours of recording. I also really love the art for this one–a rando contribution from Mr. Devendra Banhart on the front, as well as a great photo of sweaty-ass me doing puffy cheeks and wearing my favorite lacy Metalux shirt. Psychic Secession (Load, 2006)
GS: Consciously created to be a Pop Noise album, its biggest debts in terms of concept are to Brian Wilson, the Zombies, and Love’s Forever Changes. Among about a dozen guest contributions there are string arrangements, violin, live percussion, and vocals from Christina Carter, Eva Inca Ore and Sam Mickens (of the Dead Science). In some ways it holds onto the beat-heavy song structures of the our younger selves–lifting, intentionally or not, from hip hop and old industrial music in equal measure. That said, there is a lot of noise battling against all of the more accessible elements, and a definite vein of black metal, creating a pretty bracing polarity. It features “True Union,” what I consider the best song we ever wrote, though I don’t know that this can compare to it live. Drift (Root Strata, 2005)
PS: I collaged this record together mostly using snips of recordings from our first US tour. There were also a few practices from when we first moved to Oakland, including some stuff with Gabe and I both playing guitar. I wanted to make a record that was more abstract and I took the most smeared, beautiful bits of the recordings we had, went through everything, tried to match things up well, and went for it. I finished the record a month or so after I got to Oakland, but I didn’t know what to do with it, where to send it, etc. So it sat on my computer for a year or so until Jefre Cantu [of Root Strata] offered to do a record. It made sense to me that the guy from Tarentel would like this album. I still think of this record as our most successfully arranged album as well as our most…well…drifty……….

Previous Guru’s Nephew Posts a Brutally Honest Video About the ‘True Story’ Behind the Hospitalization of Gang Starr’s Legendary MC
Next NEEDLE EXCHANGE 007: An Exclusive Mix By … Kammerflimmer Kollektief