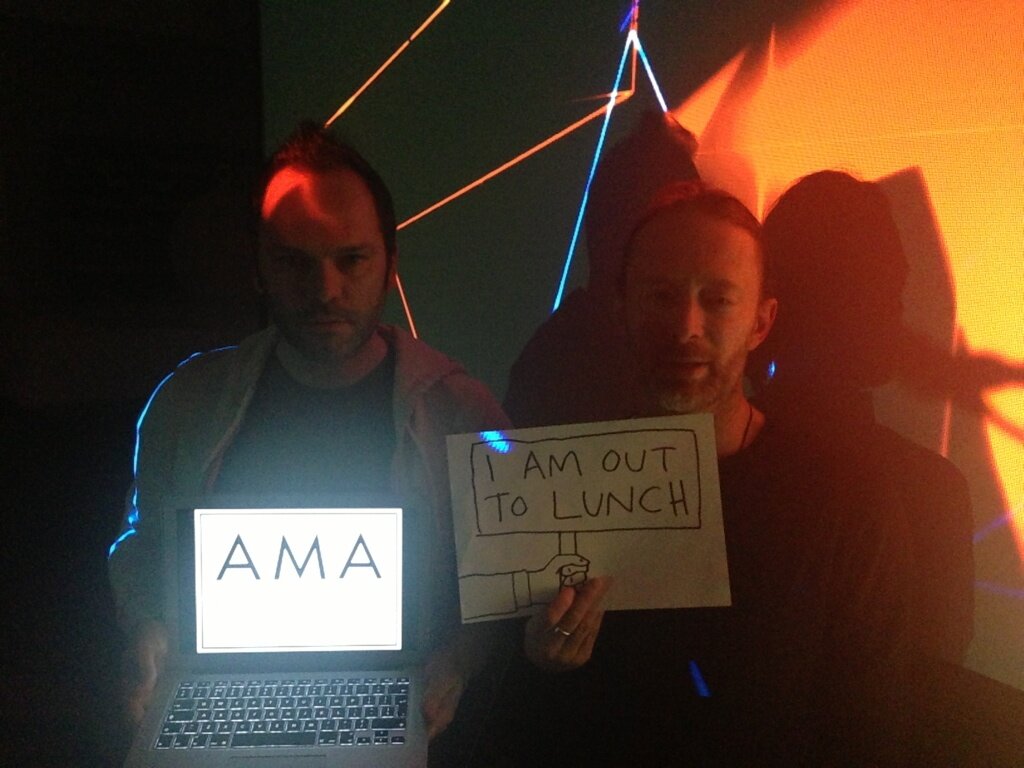 Well put, torch-carrying Reddit commenter. But seriously, today’s Ask Me Anything interview with Thom Yorke and Nigel Godrich of Atoms For Peace felt like a swarm of locusts descending on the fresh meat that is Radiohead’s reclusive singer and his longtime producer/sideman.

Determined to sift through the sarcasm and uncover some useful information, we decided to scrub away the recurring grammatical/spelling errors and run the best Q&A exchanges in the post below, including details on Radiohead’s next record, their recent sessions with Jack White, and whether we can expect more music from Yorke, Four Tet and Burial…

Jack White says Radiohead have a single ready to go. When can we expect that/what songs did you record for it?
Thom Yorke: We [were] at Jack White’s place. We now have two unfinished tracks, one of which is “Identikit.” It’s nice there, red and black and white and shit. Err, we work slower than him (understatement).

Which unreleased Radiohead track are you most excited about? “The Present Tense”? “Burn the Witch”? “Big Boots”? “Riding a Bullet”? “Dogwander”?
Nigel Godrich: I like all 50 of the new Radiohead songs.

Thom, were you actually posing for this picture, or was it a happy coincidence?
That is not me. This is Madam Tussauds. Misspelt probably.

What books have you read recently?
Thom: Wolf Solent [by] John Cowper Powys, a proto-hippie.

When you’re tinkering with a song idea, how do you make the determination that ‘this one’s for Radiohead’ vs. ‘this is an Atoms for Peace song’?
Thom: It’s a gray area, getting grayer.

Is man good or evil by nature?
Thom: Definitely good. That was an easy one.

I have no good questions, but thought I’d say hello. Keep up the good the work.
Nigel: Ahhhh!! Hello!!

Colin Greenwood has recently been quoted saying that Radiohead are regrouping this September to record the next album. Is this definitely in the cards?
Thom: By the time I’ve finished answering these there will be no time left this year.

How do you feel about the Amok leak? And music piracy in general?
Thom: Oh did it? How nice.

Do you have any pre-stage rituals?
Thom: Many many many. Upside down time. Tuning up time. Lying down time. Etc.

You guys are known for being pretty perfectionist and borderline obsessive with your material and the recording process, do you feel like this ultimately hinders or betters your creative output?
Nigel: I don’t think we’re perfectionists really…just sometimes things take time. Not because they end up perfect by any means! But it neither helps nor hinders; it just is what it is. Happens how it happens.

What’s next for Atoms for Peace and/or Radiohead musically?
Thom: What’s next? Well shit we haven’t seen each other in a LONG time. We will be in the same room again in April/May I guess. I hope.

Some songs played on the Atoms for Peace tour in 2009, such as ‘Lotus Flower’ and ‘Supercollider’ ended up becoming Radiohead songs. What is it that determines a Radiohead song from an Atoms for Peace song?
Thom: They were most definitely Radiohead tunes. Me didnt have enough material to give to the band by then! So I had to, err, fill some time.

For Nigel, how does the act of performing the material you produce in the studio change your relationship with it? In other words, do you approach things differently in producing a Radiohead record, for example, when you know you won’t be performing it live in comparison to Amok where you will be?
Nigel: Nothing is as conceived as it may seem. You don’t consider what performing something would be like when you’re recording it–you just dont thinnk about it. It’s a different hat completely.

Thom, do you plan to explore the low end of your range more in the future? I love how you sound on ‘Wolf at the Door’.
Thom: Yes I would love to. I know it’s there; I’ve heard it. It’s not naturally where I end up. So it’s a good place to head–deep into the woods. The back of the cupboard…ya nah?

any plans to collaborate more with Burial?
Thom: I very much hope so. Both me, Kieran and Burial are all as busy/vague as each other. Well ok, Kieran’s more together maybe. But we talk about it. In fact, as usual, I gotta write some words.

What are the advantages of recording analog?
Thom: A big advantage for me is watching Nigel standing in a room full of bits of tape and a scalpel.

Dear Thom, I would like to know if you prefer tea or coffee? And do you use sugar or honey or nothing in your hot drink? It is very important for me to know that, because of my imagination of your ‘normal life’ and what person you are.
Thom: Ah finally something important. Today is a strong coffee day. Seven a.m. deserves it. I’m a pain in the arse without if that helps? Mostly.

What advice do you have for any younger artists starting out? In terms of finding people to play with, dealing with all the other stuff that comes with being a musician?
Nigel: Enjoy it. Making music is a wonderful way to spend your life, but do it for the love before a career. It’s getting so unforgiving out there; I hate to think of the obstacles in the way now for new artists. If you love it and you are good, you will be fine. But be prepared to have to work hard and don’t judge your success by other peoples opinions. Have self belief.

Nigel, I absolutely love Ultraista. I was sad to hear about the tour cancellation, but things happen. Will you guys go back on tour in the near future?
Nigel: Yes! We hope so…[drummer] Joey [Waronker] had a baby VERY early so he had to rush back to L.A. It was disappointing but for the greatest of reasons!

What do you think the biggest differences are between the music you’re making now with Atoms for Peace, and the older music from the OK Computer/Kid A/Hail to the Thief days? Do you still like the older music, or have your tastes changed?
Thom: We are in the moment when we work! Not quite sure how anything has happened in retrospect. Immediately lose the memory of how you’ve got where you are, which is always my fav bit of listening back to work we’ve done.

Since many people would consider Atoms For Peace a supergroup, what would you say is your favorite (or most influential) supergroup?
Nigel: The Beatles.

Which track was the toughest to ‘get right’ in your guys’ eyes?
Thom: On Amok? Maybe Amok was tricky, only cuz the lyrics came from a really different headspace, which took me a while to feel good about. Out it’s the one I’m most proud of and gets me in the ass every time. Can I say that? Apparently so.

It seems like The King of Limbs took a lot of influence from Remain in Light by the Talking Heads. Does Amok follow a similar course? What are you expressing with rhythm? Disassociation and confusion like Talking Heads, the hypnotism of house and techno, or something totally different?
Nigel: I think this is not direct or certainly not intentional. I mean, you like music; you listen to music; you make music. But you don’t listen to other music while you’re making new music. I love Remain in Light though.

Hello Thom Yorke and Nigel Godrich! How is it working with the Atoms For Peace group compared to Radiohead?
Nigel: Like eating ice cream after a lovely dinner. I’d love to know how you got involved with Stanley Donwood, and what it’s like having someone be such a consistent part of your image over the years?
Thom: I met him first day at art college and he had a better hat and suit on than me. That pissed me off. So I figured I’d either end up really not liking this person at all, or working with him for the rest of my life.

Where do you guys think Amok fits in in your entire discography? More speciically, what’s your favorite song from the album?
Nigel: It’s on the far right. of the pile. It’s whats in our heads right now, as is everything when you’re doing/just finished it.

What’s wrong with nuclear power? You seem to be an environmentalist yet anti-nuclear. It seems like a better solution for now to have nuclear plants than a ton of pollution. I mean coal power plants produce more radiation than nuclear plants anyway.
Thom: It is too costly. I think the storage of renewables will tip their balance of viability. That is starting to happen. Read around and you’ll see. I have some good environmentalists friends who think otherwise and understand the desperation of this, but all the feasibility studies that have recently been done and costings make nuclear increasingly looks nuts. However it means we have to drastically reduce our consumption of energy quite quickly.

Flying Lotus was a fantastic opener on the 2010 tour, so would you consider having him open for you again on the upcoming tour?
He’s a mate of mine! Hes so great. He’s a lot more popular now, so I’m not sure he’d wanna, but yes it was a great great vibe.

Some of Radiohead’s lyrics seem a mixture between stream of consciousness and the genuinely confessional. I ask because I love analyzing lyrics. Obviously, anyone can take any art however they choose to, but I’m just curious how you write them, from your perspective?
Thom: Confessional?!! Mmm, I don’t think so at all. Do you think [Michael] Stipe’s lyrics are confessional? What is within is also stream of consciousness is also gibberish and also just sounds. By the time the words have stuck, they have just stuck. The glue is set and I can’t undo. Before that is a messy bit. Does that help? Of course not.

I’d like to ask Nigel whether he could shed some light on if the From the Basement idea will ever branch out like it once did, to a variety of artists? The only recent Basement things seem to be purely Radiohead based, it’d be nice to see what other people could do in that studio again.
Nigel: No that’s not true. Just Radiohead gets the most attention. We just did a whole new season which was on Sky Arts in the UK–Feist, Willis Earl Beale, Chilli Peppers…Look for it. It seems to buried somewhere. And there is your answer–FTB is a labour of love but it doesn’t get much love apart from a pretty small concentrated section of music fans.. I wish it got more, but I’m not complaining. Quality over quantity I say.

What is your biggest achievement so far?
Thom: Ummmmmmm, getting through the last tour despite all that had happened in Toronto. And the lights. And having [second drummer] Clive [Deamer] play with us. I was terrified about it, then it got dark but in the end we were all very proud of managing to pull it off. Even in the O2 in London. It was not an easy time, but it was cool.

Thom have you been to www.tumblr.com and seen some of the stuff under the #radiohead tag? You have some rabid ass fans out there.
Thom: Oh yes: http://whathaveyoudonetomyface.tumblr.com.

from all the records you have made together, are there any interesting details that you remain surprised no-one seems to have picked up on?
Nigel: Ahh…no one picked up on that? Well obviously you did. I guess you don’t intentionally hide stuff so when somebody says it’s a unnoticed detail then one is always surprised. Yip yip!

Read the rest of Atoms For Peace’s AMA interview and join in the discussion here.