RECORDING UNDER THE INFLUENCE: Ikonika 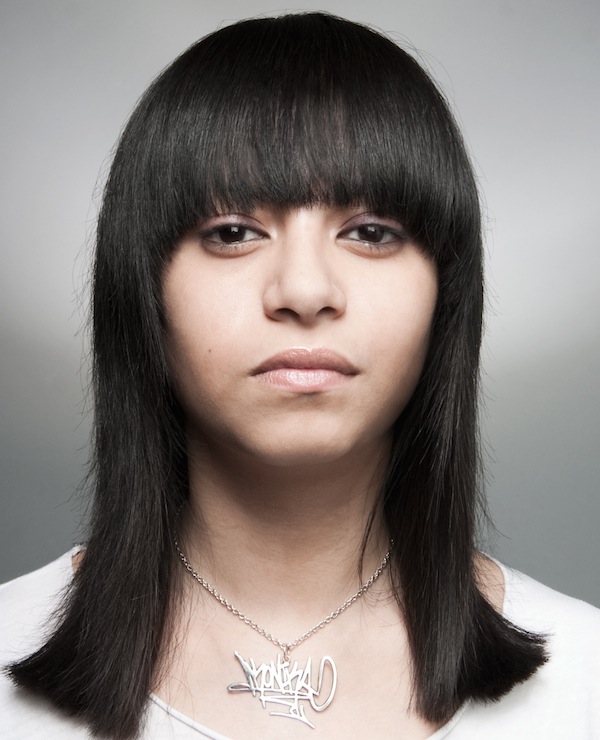 Recording Under the Influence is a recurring self-titled feature where we ask artists to ignore their musical inspirations for a minute and share what really went into the making of a particular record. In Ikonika‘s case, we’re talking about much more than the 16-bit beats of her beloved Sega Mega Drive system, although they certainly played a part in her debut LP (Contact, Love, Want, Have, out now on Hyperdub) as well. For one thing, the post-dubstep producer is a Gemini.

“Some psychology friends of mine have told me that I don’t have a personality,” she explains. “Instead, I adapt to other people’s. So I can be confused sometimes–like today.”

Honestly, we can’t tell the difference. From our end of this trans-Atlantic call, Ikonika (real name: Sara Abdel-Hamid) is nothing but a film nerd who also happens to sculpt some of shiftiest beats in the business–restless productions that make perfect sense once you hear the stories and dream worlds behind them…

VIDEO GAMES
I started out with the first Nintendo. It was actually my sister’s. She used to be so protective of it, telling me to blow into the cartridges so I didn’t break it or anything. I used to enjoy the Simpsons game on that. It was really heavy, actually. I remember I never completed it because there’s this one level I kept getting stuck on. And since you couldn’t save the game, you had to start from the beginning and try to get to that level every time. I remember playing WWF on that, too. It was really basic–just the crowd and no ring. It had Hulk Hogan, Randy Savage and Bret the Hitman Hart on it.

I remember being intrigued by the music of Sonic the Hedgehog–that happy late â€˜80s, early â€˜90s sound. I used to love the sound effects it’d make when you collect the rings or get special powers.

Not being able to save your game is a lot like producing with a simple sampler. I remember Mala talking about how his one friend has an old-school sampler with a couple seconds of saving time. And he’s able to create albums with it, which is so insane. That’s part of why I never got an MPC. I tried it once, with my boyfriend’s MPC, and it just took forever. For me, that takes away the creative aspect of music, when you’re just sitting there, milling about. I like things to be kinda instant so I can get it out there as quickly as I can.

The one obvious game that influenced this album was Streets of Rage, which came out on the Megadrive. When I was writing, I listened to its soundtrack and thought, ‘Some grime producers ought to jump on this!’ It has that timeless sound. You guys didn’t have the Mega Drive, did you? It was a rival to Super Nintendo that was cartridge based–big but flat. It was a nice machine, though.

I remember talking to Martyn about 16-bit stuff, because he has a younger brother who’s about the same age as me. He was like, â€œOh, you’ve got to play Mortal Kombat with my brother.â€ When he wrote the song â€œMega Drive Generation,â€ it was a homage to me, Joker, Darkstar:But yeah, if you have a PS3, you can check out the Sega Mega Drive Ultimate Collection, which has all of the classic games on it, including Sonic and Streets of Rage.

SURREAL/SCI-FI FILMS
I didn’t get into sci-fi films until my last year at university, when I was writing about postmodern cities and had to look at films like Blade Runner, Demolition Man, Back to the Future Part II, The Matrix. Around the same time, I also got into Hitchcock, Werner Herzog, and Luis Buñuel, a Spanish film director who was really into surrealism. He moved to France and met up with Salvador Dali. They made a film together called Un chien andalou, and since this was pre-censorship, they were free to do whatever they wanted to. He was really into dreams, insects, religion, sexual themes, and critiquing the bourgeois society.

Being from Spain, he was brought up in a very traditional Catholic family. His parents forced him to study engineering, but he just wanted to do art and films, so his films carry those themes. They’re pretty fucked-up.  He’s more about the subconscious, which is how I like my music. I never remember my melodies after I write them. Like I can’t play them on a keyboard. Something just happens to me–this dream world, in a way. It’s a bit of a blur, really.

Since I started off as a drummer, I never really had melody in me. I was always just improvising. I don’t read music, either. I have a mathematical approach to writing melodies. I tend to see numbers instead:I’ve never really wanted to make straight beats, either. I always found that a bit boring. It’s hard to make music that isn’t fatiguing, you know? I’m definitely happy that I can listen to my album and say, “I’m a fan of Ikonika.” Not in a narcissistic way, either–just â€œthis is what I want to hear.â€ THE COLOR RED/EVEN NUMBERS
To me, red is an even, round, soft color. But at the same time, it can contradict itself. I really like that idea of fusing wet and dry, hard and soft–all of those blatant [contrasts]. I don’t know. If red was a number, it’d be an even one. Me and [producer/Hyperdub owner] Kode9 have arguments about that. I like even numbers, and he likes odd ones, of course, what with the 9 in his name and all. He’s just like, â€œWell, it’s mysterious, sharp and edgy.â€ And I’m like, â€œWell no:â€ We’re just sp used to even numbers, to writing in 8ths and 16ths. It’s a natural beat we’re all used to, and familiar with, even before we’re born.

That’s why the album has 14 songs on it instead of 13 or 15. I get really worried when the catalog numbers are odd instead of even, too. Like â€œMillieâ€ was Hyperdub 015 and that scared me, and the same with “Sahara Michael”–it was Hyperdub 029. So I was pretty happy that the album is Hyperdub CD004. While Steve would say being unsettled is the point, I don’t like it. [Laughs] MILLIE THE CAT
When I was a child, I thought all cats were girls and all boys were dogs. So you’re either a cat or a dog. I’m a cat, and Millie’s a cat, so we’re all friends…I’ve had my cat six or seven years. She was originally my sister’s but she left home to get married and became mine. Her name was actually Billie before, because it means â€œcatâ€ in Punjabi and all my sister’s friends are Indian. They’d yell, â€œBillie! Billie!â€ And it just stuck.

She’ll always lie down on the keyboard when I’m working. I think she really likes bass music, but who doesn’t? After all, when you’re in your mother’s womb that’s all you can hear.

Previous PEEP SHOW: The xx, “Islands”
Next Presenting CEO, the Solo Project of the Tough Alliance’s Eric Berglund (We Think)