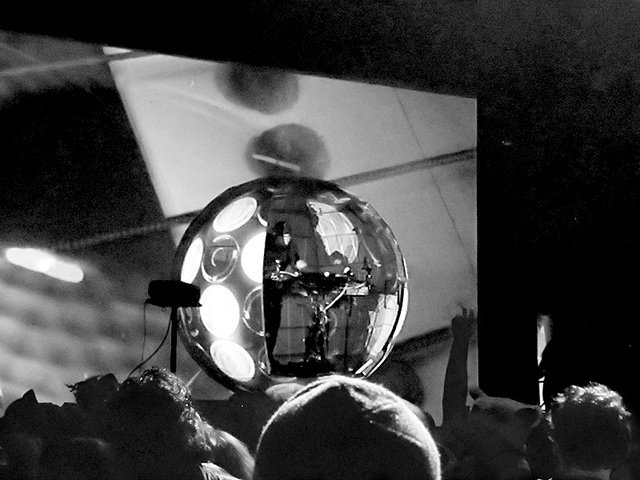 Okay, so the “Shadowsphere” setup of DJ Shadow‘s fall tour is a little gimmicky–a Death Star one minute, a basket/base/soccer ball the next–but it’s also a reminder of where the iconic producer comes from. And that is the long-lost era of crate digging and early rave culture that gave us dizzying cut-and-paste compositions, synapse-locked visuals, and our personal favorite, “chill-out rooms.”

The soundtrack of which was music like DJ Shadow’s flawless debut Endtroducing… Now 14 (!) years old, it hasn’t aged a bit. If anything, it’s emerged as one of the greatest albums of the past two decades, a sample-strewn masterpiece on par with such untouchable hip-hop albums as Paul’s Boutique and 3 Feet High and Rising.

As for what DJ Shadow’s done since, we’re in the camp that could do without a lot of The Outsider, if only because its preceding LP (2002’s The Private Press) includes such heart-sinking moments as “Blood On the Motorway,” “Six Days” and the increasingly tense “You Can’t Go Home Again.” It’s not that the Bay Area vet can’t write a solid hip-hop track. It’s just that he was clearly born to pair dusty breaks with snippets of soul and the kind of melancholic melodies you simply can’t fake.

This point was driven home at Brooklyn Bowl on Tuesday night, as DJ Shadow sparked his encore with an untitled new track that was nothing but a lonesome piano loop and a lightly scratched jazz vocal. While the rest of the night was dominated by a lot of juiced-up jungle–seriously, DJ Shadow could tour with Dieselboy and Goldie at this rate–and several crowd-pleasing nods to his first couple records, this one moment was a thrilling reminder of what DJ Shadow does best: make us actually feel something beyond a head-nodding hook. Although there was definitely some of those too, as evidenced by the video below…