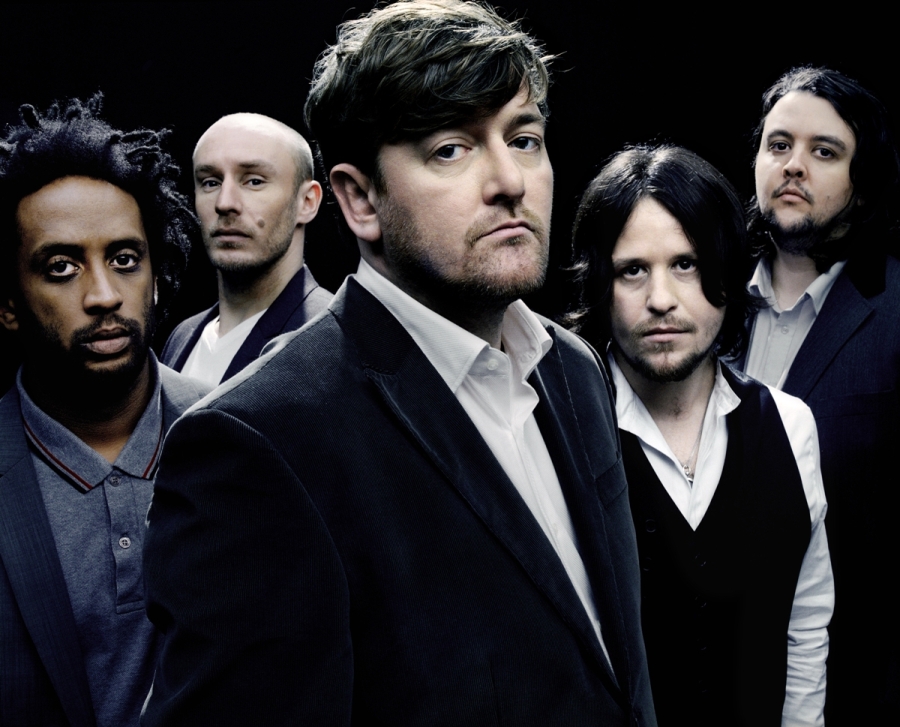 Five albums in, Elbow still finds itself in a weird place. The British band is neither overtly arty like Radiohead, nor as sappy and saccharine as Coldplay. Instead, frontman Guy Garvey and his band of brothers are somewhere in the middle of it all–hopeless romantics, men out of time with the goal of evoking genuine emotion from the masses.

Garvey and bassist Pete Turner chatted with us over a few pints about their lot in life as members of a band that is unabashedly romantic. And after the exceptionally evocative record Build a Rocket Boys! was released a few months back, Elbow has even further secured itself as sentimentalists. In fact, during our interview, when we tell the two representatives of the group that the new album is “idealistic, nostalgic, and sweeping,” Garvey thanks us profusely. As if these were the three exact words he had wanted to hear. No, they’re definitely not like other bands, those sappy Brits, but according to Garvey, he wouldn’t have it any other way.

“Sometimes I wonder why I’m not working in the Red Cross. Wouldn’t that be more meaningful than being a singer?

self-titled: How long have you been doing this for?
Guy: Twenty years already. I started doing this when I was 17 years old.

Initially, you played covers. What songs did you pick?
Guy: Chuck Berry songs. Things like that. But we were shite. Then we were a jazz-funk thing. Honestly. We were called Mr. Soft.

Aren’t you glad that 20 years on, you’re not called Mr. Soft?
Guy: I think we’ve got an equally shit name.

Why do you feel that way about your own band name?
Guy: The way we arrived at that name…it was on a list of many names.
Pete: Do you remember the other names?
Guy: Nah..I told everyone to come to a band meeting with a list of band suggestions and I was the only one who showed up with a list. Everyone else showed up with squat. I put my finger on a list and it was Elbow.

Your last record, The Seldom Seen Kid, was a potent record about a friend that you had lost during the recording of the album. Was it awkward discussing a close friend’s suicide in interviews promoting the record? Did it cheapen it?
Guy: I knew that he would much rather be talked about that be forgotten.
Pete: I liked talking about him. It made me feel like he had still been here.
Guy: Everything around the time of his passing was very hard on us as a band. We had some things we had to resolve on the business side of things as well. It was a tough time to get through. Talking about it was rather cathartic…whoever wanted to listen.

Elbow, it would seem, is properly a career band.
Guy: Before Seldom Seen Kid, we were happy as a band. We were living off the music already. And when we work on a new record, we want to make something for the fans but we also want to satisfy ourselves. Now we feel we have more freedom to make things, like the new record, that some wouldn’t consider accessible.

Well, let’s talk about the connection you have with the audience. Elbow has always had an organic link with the arena. Fans always sing along.
Guy: It’s still a wonderful feeling. It doesn’t ever subside.
Pete: Looking out at these people, we know some of these songs are very meaningful to them. Like “Mirrorball,” I know people find it quite emotional. But then we’ll have a laugh in-between songs. Guy likes to banter. And I’m sure it’s weird to them, being in the moment and all.

My favorite song is “Not A Job” from Cast of Thousands. To me, it’s about the minutiae of the every day and being a working man and the depressing repetition of it. Did I get that right?
Guy: Yes. It’s about that. But it’s also about whatever it is you’re doing. Even being a rock star…[Laughs] I mean, there are times when I think about what I’m doing in this band and wonder why I’m not doing something more meaningful. Sometimes I wonder why I’m not working in the Red Cross. Wouldn’t that be more meaningful than being a singer?

NME called you the laureate of the everyday. Where does this ability to connect to the every man come from?
Guy: Hmm…well in the example of “Not A Job,” I resented the very idea of getting a job. So fucking cruel subjecting half-baked kids to committing to a job for life straight out of school. It just seemed so unfair. I think “Not A Job” is a flat declaration about the myth about only enjoying the weekend, and not the other five days of the week. I can’t believe that that’s our lives and that’s what we’ve chosen for ourselves. The line in that song that resonates with me the most is “leave me and the plants die, a panic smile across your face.”
Pete: I remember when we recorded that song, we didn’t necessarily know that this band would be our lives. It was our second album and it wasn’t a definite after one album that this would be our career.

“The Birds” and “The Birds (Reprise)” from the new album is so old school in a prog-rock way–the way the song comes back at the end of the album.
Guy: I created a romantic image of the birds carrying all the kisses from that day; that they were the witnesses of all the romance they’d flown by. No one else was around to see all that love except for them. And then the middle section–the chorus–needed a darker theme, so I came up with the narrative of an old man being [mocked] while he was reminiscing about love. They’re telling him to come in from the outside. “What are we going to do with you now?” they say. They tell him, “Looking back is for the birds.”

And so when we did the “Reprise,” we thought we should have an old man singing it. We went through a casting agency and interviewed old men to sing the song. They didn’t know what they were coming in for. We just saw them and asked them to audition. This one fellow that came in named John and he was a sweet door mouse of a man. We were so impressed with him. He recorded the track for us…it came out exceptionally. So I got an email a few months ago through my radio show on the BBC6 from a guy named Daniel who, it turned out, was John’s grandson. He told us that the one thing we didn’t know about John is that he was in the MI6 during the Cold War. This door mouse of a man could have snapped our necks with a finger.

Which would explain why you’re so sensitive. And it’s also been an influence on you.
Guy: Oh, yes. The understanding that I have. The insight to the opposite sex and the range of emotions that they go through.

Having talked about Peter Gabriel being an influence on the band, I’m wondering what it was like to have him cover your song “Mirrorball?”
Guy: It was ridiculous. Blew my mind. We didn’t even know it was happening until a few days before it was released. Honestly. And he did such a remarkable job with the song. The arrangement was so unusual. And speaking of sisters, my sister Becky was responsible for turning me on to Peter Gabriel. Such an exceptional individual. I would say that as far as career highlights go, hearing him sing an Elbow song….it’s up there.

Elbow is currently on a North American tour. The band plays Terminal 5 this Sunday, September 25. Tickets are still available here.