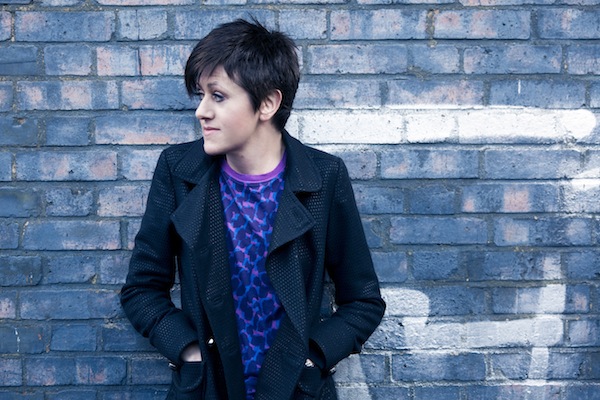 You’re not still referring to Tracey Thorn as “that girl from the deserts-miss-the-rain video,” are you? Let’s hope not. After all, Everything But the Girl‘s been ‘on hiatus’ since 2002, and Thorn just released her second album in three years, the rather spare, synth-free Love and Its Opposite. Considering two and a half decades separated her debut (A Distant Shore) and 2007’s Out of the Woods LP, this is reason to rejoice, reason to think that one of the most important female vocalists of our time (see also: Marine Girls, several key Massive Attack singles) has finally found a way to balance three kids and extensive studio time.

self-titled spoke to Thorn during a rare press day in New York.

“I just had to leave electronica behind for this album and say this is what I am doing now. This is my current project.”

How did you end up working with Ewan Pearson on Love and Its Opposite?
I collaborated with a few people on my previous record and Ewan Pearson was one of the ones suggested by Ben (Watt, from Everything But The Girl). We got on so well that I ended up deciding to work with him with this record.

Pearson is predominately a dancer producer, and this album is very acoustic and folky. Why did you believe that would work so well?
Well I think it’s more to do with the fact he hasn’t had an opportunity to work outside of [that realm], as he knows just as much about folk as he does electronic music. So this time ’round I said to him, I would like to make a more acoustic record and I don’t want to do loads of collaborations. I wanted to be more focused and just wanted to use him.

So does this mean Love and Its Opposite was a full-on collaboration or is it something you wrote more or less on your own?
I tend to write very much by myself. I sort of got together with Ewan when I had songs basically finished in terms of the writing process, as I am not one for the writing as you go. I can’t sit there and write a tune and just sing ‘la, la, la’. I have to sing something so even if it is a rough of where the words are going to go.

Was there a reason you wanted to try the folk direction?
It was basically for me to set myself the challenge of thinking of things a different way. Generally when I have done dance collaborations, the other people have sent me a backing track and I have written vocals for it. It was a bit more of a 50/50 process and I really enjoyed doing that. But I like that now I had to work without a safety net. I am the one now who has to deal with the silence on every track and find a way to fill them in. But also:I am not an electronic producer and that kind of limits my musical arrangements.

Would you like to learn more about that side?
No, not really. It’s just not me; I’d get bored so quickly.

I guess then it’s funny for you, then, that you are so well known for your more electronic tracks.
Yeah I know! But you can’t do everything. It’s so true! I especially realized this working with Ewan.

How does this album differ from your last in your mind?
In a way they are both quite you know:divorced but I think of it as just a different slant. I think each time you do a different thing you almost have to exclude something, to make it a different character. I just had to leave electronica behind for this album and say this is what I am doing now. This is my current project.

I really like your album artwork for this album. Did you decide to take more control of this side of the album too?
No. Like I said about learning electronic production, I feel like I can’t do everything. So I left it all to designer John Gilsena. I had nothing really to do with the design. John kind of came to me with this idea of using stock family photos and altering them. I really love the result.

This album sounds very personal and intimate. Are your lyrics autobiographical?
No, not always. I tend to put things in first person because it sounds better but a lot of is true; not necessarily about me, but from people who surround me.

A story however seems to unfold with the album as if it was one person. Was this purposeful?
It wasn’t deliberately started like that, with me thinking about characters, as it was more a bunch of songs written over time. In retrospect, however, I can see why people hear that.

Do you always need to be writing?
No, I have long gaps when I don’t write at all. In a way, I am a bit wary of writing all the time, actually. I would like to think that I come up with some great songs [that way].

Have you ever thought about writing for other singers?
No, I haven’t actually, and I don’t think I would find it an easy thing to do. Maybe because I am so used to writing for my specific style.

“The real issue was the tension between Alice and me. I wanted to be the main singer and she was taking more of the lead vocal role in the band.”

It is sort of a full circle going back to folk due to you starting out in a band I really loved, Marine Girls. Was that your first musical project?
Yeah, well, I was in a band before that actually but yeah:it’s a weird thing that the support of the Marine Girls are coming back and are being noticed more than they ever were.

I find it interesting as well how a lot more people than I would imagine reference that band.
Yeah, it’s Kurt Cobain’s fault.

Ha!
It’s a strange one:I mean we only ever made two incredibly simple records.

I remember being really intrigued as it was so sparse and you had no drums.
Yeah, because we never had a drummer. We did a few gigs at college and managed to get it together to make a second album, which was quite tricky as we had left school and were living in different places.

And now people have more interest in it than ever.
I think it had to do with that idea of what we were doing was very different at the time; being very suspicious and very distrustful youth, we had no connection at all to the music industry.

It is funny to me that there are a lot of current bands trying to replicate the sound groups like the Marine Girls had, when in reality if you had then what we have now you would try and make the most polished piece possible.
Totally! You know I used to find it frustrating as we weren’t trying to be simplified and lo-fi. That was just us to the limit of our abilities.

Why write amazing pop vocals and then bury them in a way that they are hard to distinguish anything from the sound?
I know. I think towards the end of Marine Girls, it became slightly patronizing–saying it was okay to be a version of women that was very naive and not very polished.

And your first solo record came right after Marine Girls?
Well, actually around the same time, as I had time apart from them. I don’t think Marine Girls could have stayed together, as not only had we all moved away from each other but the real issue was the tension between Alice and me. I wanted to be the main singer and she was taking more of the lead vocal role in the band.

When did Everything But The Girl come about then?
About the same time as well, when I met Ben at college (The University of Hull).

Wow. OK, so now this new album is done, have you been working on anything else?
At the moment, Ewan and I are thinking about making a Christmas single.

Really?
Yeah, we’ve been saying it for years and it has always been to late, but this year we hope it will happen–a single and maybe a cover.