THE SELF-TITLED INTERVIEW: Washed Out 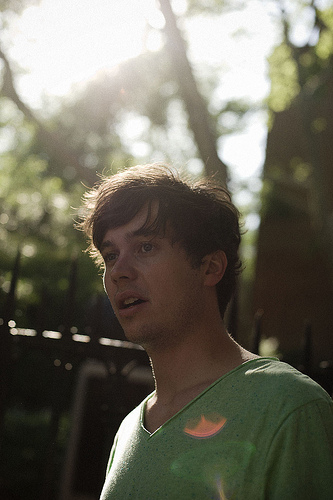 Not exactly the names you’d expect Ernest Greene to drop now that he’s finally finished Washed Out‘s long-awaited debut LP. And yet those reference points ring true as Within and Without‘s singular vision develops like a stack of double-exposed photos.

Don’t worry, though. Greene didn’t lift his loops from “Like a Virgin” or “Set Adrift On Memory Bliss.” He started from scratch instead and simply added certain production techniques–repetitive drum rolls, digital textures that are alien and inviting–to an ever-expanding manifesto of what it means to make a Washed Out record these days.

“I struggled with the direction at first,” admits Greene, “because I wasn’t exactly sure what a ‘Washed Out song’ was. Most of the stuff I tried at first was too psychedelic or too dance-inspired, but I was eventually able to strip away all of the unnecessary bits and figure out the core of [my music]: very simple, but hopefully emotionally-moving songs.

“It wasn’t until the album was starting to really take shape that I started to notice a few similarities to other things that I wanted to explore more,” he continues, “like a few elements of early ’90s pop music. On the flip side, there are a few songs on the record that are a little slower and more spacious that reminded me of Mazzy Star, so we tried to bring that out a bit—the melancholy/ambivalence that I’ve always loved in music.”

The following interview was conducted over E-mail as Greene rehearsed for his current tour back home in Georgia. It’s been edited for style and clarity.

“I never want to bore the listener. I want to entertain.”

self-titled: You said you struggled with the direction of this record. General speaking, how much time did you spend working on it?
I demoed some material in June and July of last year, but I spent most of my time researching production techniques and equipment. I wrote all of the music in August/September; finalized the arrangements and lyrics in October/November; and recorded/mixed over the course of 11 days at Maze Studios in Atlanta last December.

What were some breakthrough moments where you started to feel like you had a general idea of where things need to go creatively?

The intro of “Eyes Be Closed” was written in January 2010, but didn’t fully take shape until August, when I wrote the bridge and chorus. Around the same time, I wrote “Amor Fati,” which came very quickly and painlessly. In my experience, the best songs happen like that. If I have to work really hard on a song, it’s usually not very good. The frustrating part is waiting for an ‘easy’ song to come along. What are a couple examples of how songs changed over time? Which ones changed drastically?
I had an almost finished version of “Before” as far back as December 2009, but it was very much in the style of my older material. (And thus didn’t feel right for the record.) [Producer] Ben [Allen] and I took a couple of days break for New Years and I re-recorded a version of “Before” at home that felt more in line with the record.

Coming into recording with Ben, I made a list of references; a lot of which were early ’90s pop songs, like downtempo-leaning ones from Madonna, Seal or P.M. Dawn. I wanted to move away from the heavy analog synth sounds that are all the rage these days in favor of more digital-sounding textures, and also feature very repetitive drum breaks, which were very popular in the ’90s. That being said, we were very careful not to take these influences too far, so I hope it’s not too obvious from first listen.

When you say some were too psychedelic or dance-inspired at first, what do you mean exactly? Were some sounding like straight-up techno and some sounding too experimental?
I wanted the songs to be pop songs first; never experimental for the sake of being experimental. It’s the same thought with balancing genres–when a beat is too heavy or a certain instrumental part is too obviously weird/psychedelic it can quickly overwhelm the song. And then it becomes ‘beat-driven’ or ‘avant garde’, which I consider bad words in the Washed Out world. I want those elements present, but balanced in way that feels very natural and listenable.

I think “Soft” is a good example of this. I absolutely love soundscape-y music, so I tried to take a piece of that and squeeze it into a pop format. If I had included a five-minute soundscape instrumental without a beat, the album would have come across very differently. I guess in the end I never want to bore the listener. I want to entertain.

It sounds like you over-thought the record for a while, then decided simpler is better. Is that a fair assessment?
The biggest struggle with this record was that I had learned so much more about the technical side of recording; the idea of “the more you know, the more you know what you don’t know” sort of thing. I got to be way too critical about the the way things sounded instead of thinking about the songwriting. It certainly helped having Ben on board at the end of the process. It was nice having someone to bounce ideas off of.

When you said some of your older songs sounded too retro, which ones are you referring to?
I think “Belong” stands out. It was the last song I recorded from the Life of Leisure/High Times-era. By the time I got back to writing again, that sound felt completely played-out. I don’t think the retro thing defines a Washed Out song like it might with some of the other chillwave stuff.

Your tour with Small Black must have helped you learn what is and isn’t working with the ever-evolving sound of Washed Out. Can you tell me a couple things you took away from it?
Things happened so fast during the first half of 2010 that there was little time to reflect on or change anything. I realized a number of technical things that I needed to change and so I started researching how to go about changing them as soon as I got home in June. So a big part of the summer was spent schooling myself on recording/music theory. I definitely needed that time to get in the right head space to even start writing.

“it’s probably not the healthiest thing to do”

How would you describe how this record ended up for someone who isn’t familiar with your music yet?
Washed Out is very personal, and the songs have always served as little glimpses into my personal life. Anyone who is a casual fan probably knows my background–where I came from,
how I was discovered. That is a view from the outside; this record is meant to be an internal view. Now, I look back at each song like I’m reading a diary. I tried to account for all the different emotions I was dealing with making the record, everything from overwhelming joy and happiness to deep fear and anxiety. So when you combine the internal and the external–what’s happening both within and without–you get the full picture.

I don’t want to be defined by any one genre because I think the Washed Out stuff sits at a weird place at the intersection of a number of styles. So I made an effort not to fall too far in any direction. That was why I chose to use more acoustic instruments to balance things out with the electronic elements. There is a lot of bass guitar, a lot of live drums, even cello, piano, and brass instruments. I also wanted the album to be more dynamic than my previous work. As soon as I wrote the climax section of “Eyes Be Closed” I knew that I needed some production help to really make it huge. And the same is true for a few others. So most of the aesthetic decisions were about serving the songs.

In our first interview, I remember you telling me how much hip hop and things like DJ Shadow inspired you in the beginning. What were some touchstones for this record in terms of your production techniques and general direction?
I’ve always been a really big music fan, and I’ve always prided myself on keeping up with what’s new and fresh and interesting in music. But one of the more depressing things about working on this record was a point I reached early on where I felt like everything I listened to could potentially affect my own music in a negative way. I felt like in order to stay focused I needed to keep outside influences out. In retrospect, it’s probably not the healthiest thing to do–you start to experience the musical equivalent of cabin fever.