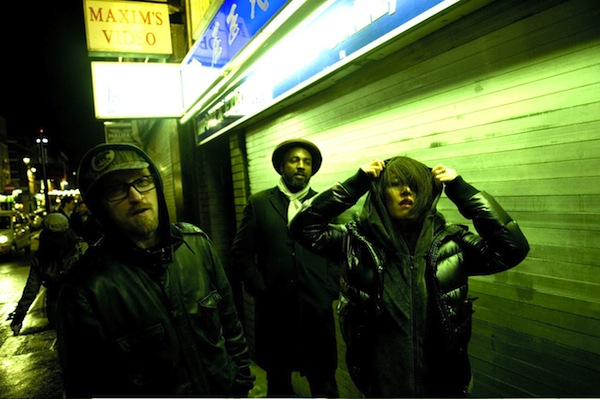 Like his last public appearance as the Bug (2008’s speaker-pummeling London Zoo LP), Kevin Martin‘s King Midas Sound project is rooted in dub reggae and subterranean electronic music. There’s one key difference between the two, though: the Bug is dancehall gone heavy-metal and KMS is everything we wish Massive Attack were in 2009: sinister and strangely sexy, with a debut album (Waiting For You…, out now on Hyperdub) that’s quickly becoming one of our favorite late fall listens. That’s because it unfolds like a tour of London’s neon-lit back alleys. Or at the very least, a walk through Central Park at midnight, as snow starts to fall and the freshly-frozen ground crunches and caves in beneath your boots.

Since King Midas Sound is such a group effort (Martin’s ominous soundscapes paired with the falsetto-infused poetry of Roger Robinson and the melancholic melodies of Kiki), we asked each of its members to talk about five rising artists/producers/spoken word performers in their respective fields. Here’s what they had to say…

1. Ras G & the Afrikan Space Program
Sun Ra via Lee Perry, as translated by the the soul bro’ of Flying Lotus

Stacy Makishi
A Hawaiian/Japanese resident of the world, Stacy Makishi is a veteran. Less well known than she should be, but those who know her never forget her. The sheer waves of emotion that come over you with every performance. Technically excellent, her physical performances and knack for leaving no clues as to where the performance is going until you’re emotionally ensnared in it. Genius.

Polarbear
With this minimalist storyteller, there are no fancy sets, no excess movement, no pandering to the audience–just the story itself. Oh, and in his shows, everything rhymes, although it’s hard to notice it when you’re too busy following the story.

Inua Ellams
Inua recently moved from spoken word shows to solo theatre, and won himself an Edinburgh Fringe First award. (That’s a big thing in England.) His combination of verbal pyrotechnics and heartbreaking, funny stories is a winner. His solo show, The Fourteenth Tale, is transferring to The National. (That’s a massive thing in England.)

Francesca Beard
Blurring the line between poetry, comedy, surrealism and madcap interviews of the audience, Francesca Beard is a raconteur. Never bowing to style, but always giving a nod to fun. Often called the queen of the spoken word scene. She’ll never fit any definition you’re trying to have of her.

Nick Makoha
His one man show, My Father and Other Superheroes, will go down as a watershed moment in solo performance–so revealing and unique. The whole one hour show has the structure of the stanzas of a poem. Flitting from past to future to give you the mood of a son who never got to spend time with his father but learned about being a man through TV.

Hey, I know that’s five, but here are some special mentions:
Sophie Woolley, the most chameleon-like performer ever; Lemn Sissay, the most revelatory and word perfect performer ever; and Malika Booker, the most consummate emotional storyteller ever. Check all these people out.

1. Corrupted
A Japanese doom band. Ironically, I saw them performing in London, not Japan, this year for the first time. They totally blow me away and hypnotized me. The music was beautiful and the vocals are so so heavy whilst he sings in both Spanish and Japanese. One of the best shows I witnessed in 2009.

4. Rumi
A female Japanese rapper. When I first discovered her three years ago, she was singing on dubstep tracks. She just released a new album (Hell Me Nation, Hip Hop, Ragga), and you can check all the tracks from it in her new music video.

5. Devil Man
My mate’s band, formed by a crazy Japanese duo, DJ Scotch Egg and Gorgonn. They are based in the UK now. Dub, hardcore and total comedy.

Previous TEST PRESSING: Download New and Old DJ Mixes From The Time and Space Machine, Andrew Weatherall and Greg Wilson
Next A QUICK TALK WITH RAMONA FALLS ABOUT … Kanye West, Marty McFly, and the Uncertain Future of Menomena