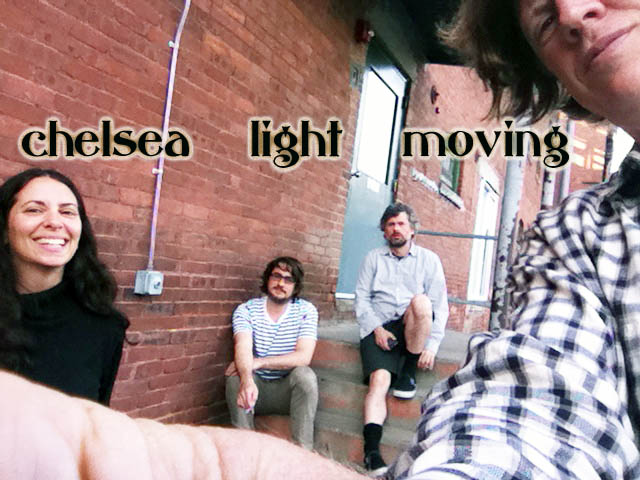 Thurston Moore has decided to mark his 54th birthday with another free track from his new band Chelsea Light Moving.

Here’s his rather lengthy explanation of “Frank O’Hara Hit” from Matador’s official site, and the song itself…

Right now we’re whipping around Europe playing some summer love-cry gigs. I wanted to release this song by the end of July because it’s a meditation on that month through history in events that define a lot of what mytho-romanticizes my heart, both broken and blessed at the moment. On July 25, 1965 Bob Dylan with the Paul Butterfield Blues Band delivered to rock n’ roll the dissident soul of folk music and poetry. For many it was already a viable meeting but Dylan set it on fire for the world to see. And he was famously cursed and booed by the gatekeepers of old ways wariness. The song he sang was Phantom Engineer (later titled It Takes A Lot To Laugh, It Takes A Train To Cry). On July 24, 1966 the NYC poet Frank O’Hara was struck by a dune buggy while hanging out on Fire Island, and died the next day. O’Hara knew poetry in all it’s formalist glory and like John Cage’s ear to music liberated it for writers for an unending time. In his essay Personism: A Manifesto (published in Leroi Jones’ Yugen magazine in 1961) he writes, â€œI don’t : like rhythm, assonance, all that stuff. You just go on your nerve. If someone’s chasing you down the street with a knife you just run, you don’t turn around and shout, â€˜Give it up! I was a track star for Mineola Prep’:As for measure and other technical apparatus, that’s just common sense: if you’re going to buy a pair of pants you want them to be tight enough so everyone will want to go to bed with you. There’s nothing metaphysical about it.â€ On July 26, 1943 Mick Jagger was born in Dartford, Kent, England and would become the 20th century’s erotic pinup for the unsafety of teeny bop girls everywhere preaching the gospel soaked blues of African-American music that their parents were most likely frightened to death of. His skill in getting it and keeping it together and continuing to honor the magic that rocks the fuck out when Howlin’ Wolf hit the mic is what inspires every tantalizing facet of real rock n’ roll. On July 29, 1966 our hero Bobby Dylan crashed his motorbike while taking it for a spin in Woodstock He had just recorded three lightning rod LPs (Bringing It All Back Home, Highway 61 Revisited, Blonde on Blonde), a book of writing (Tarantula) and was taking a breather between a just finished nine month world tour (where he was facing audiences half pissed at his â€œJudas!â€ betrayal of folk purity) and readying for sixty-four American gigs booked by money hog Albert Grossman. He was amphetamine skinny and breathing high-octane annunciation. He returned to us a man in control of his image and he provocatively crushed celebrity underfoot like a shitty Marlboro. Let us kiss our lovers gently in July as the lathered sunrays of August take us into contemplation and a sweet trust to a future we will always fight for. In rock n roll, soul, tenderness and piety.