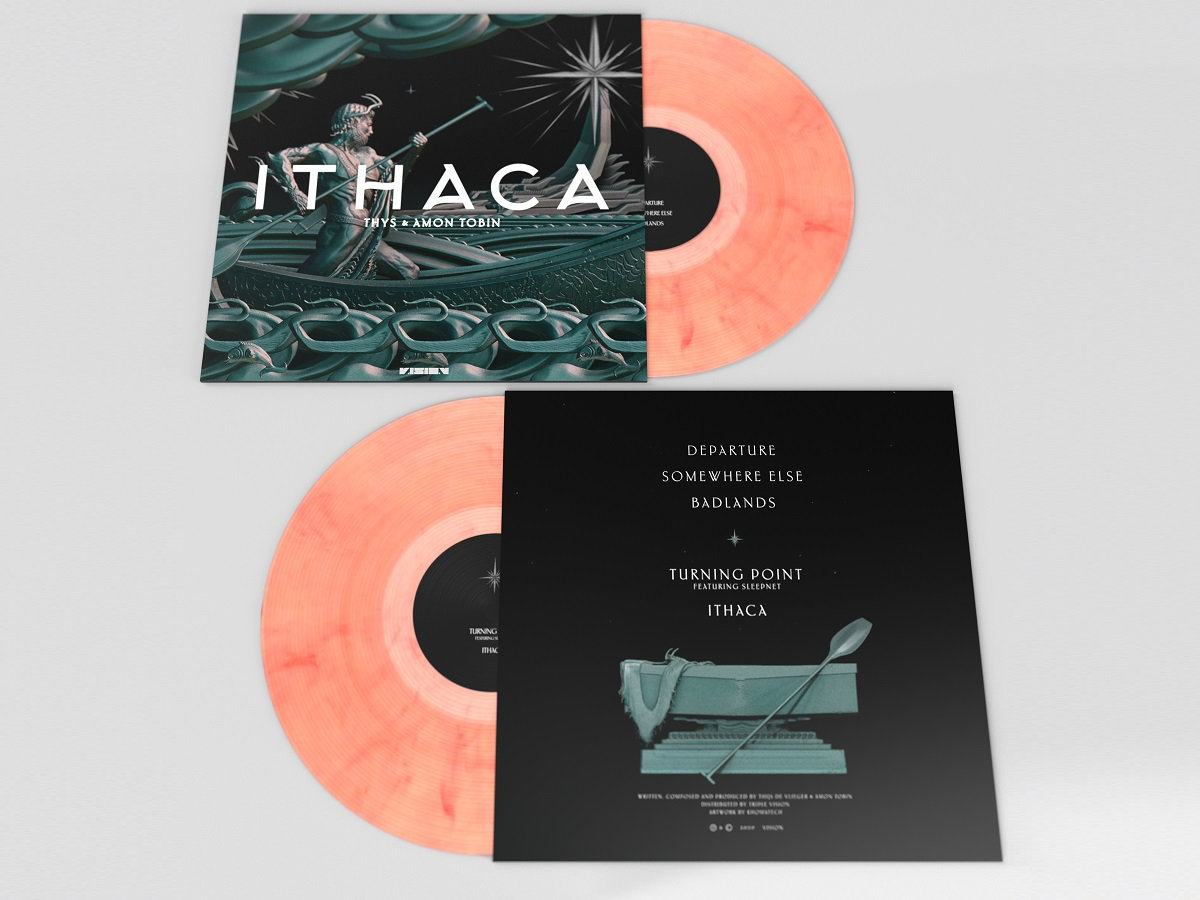 Considering their first collaborative EP (Ghostcards) opened like a slightly more lucid Caretaker tune, it shouldn’t come as a surprise that Amon Tobin and Thys are redefining their respective sounds yet again on Ithaca.

Available as of last week through NOISIΛ’s Vision imprint, the largely beat-less affair barely grazes the ground over the course of 21 weightless minutes. In other words, someone oughta recruit these longtime friends for a proper film score. In the meantime, here’s what they had to say about what’s essentially a space opera waiting to happen….

Amon Tobin: “Departure” was one of the later sketches we added to the bunch, I believe. It started with a sketch Thys had made, which he brought to L.A. in parts. We then worked on it together, added sections, changed stuff around.

When we were writing this material it was all one big bunch of music and sound; only later on, did we try to make sense of it and see any common threads between individual tracks. That’s when we categorized tracks like “Dzjengis” and “Charlatan,” and the Ghostcards EP into separate little projects with their own stories.

When we were writing the music, that distinction hadn’t been made yet, but I think “Departure” sets off the journey quite nicely.

Thys: Yeah, all our ideas and ambitions for this record are already present in the first track — lots of melodies, lots of big synths, lots of vocals and orchestral strings and woodwinds, and a decided focus on atmosphere rather than on impact.

Thys: This one was started in Amon’s room. Amon had left the house to run some errands around town, and I recorded the first phrase on his Haken Continuum keyboard. The working title was “The Invader” or something like that, because I felt like a burglar sitting in Amon’s room writing music with his instruments without him around. Haha….

Amon: We structured the record around a very simple story: someone sets off on a voyage, they find themselves lost in a really unfriendly environment for far too long, and then finally finds the way home and starts to believe they can make it back.

“Badlands” is where the environment is throwing all kinds of misfortune at them.

Thys: With the artwork, we wanted to refer to the classical stories of Ulysses and Ithaca, but also place it in the future. It sounds more like a 20-year voyage between galaxies than a voyage between ancient Greek islands.

Thys: This is the track that took the longest between start and finish. Carbon dating of the initial audio file suggests that it was started somewhere in 2011.

Amon: Yeah, Thijs had brought this beautiful sample with a full chord progression already baked in, and we just took that and started expanding on it. They’re the synth chords you hear halfway. The challenge was always to make that part the highlight of the tune; previously it had all kinds of twisted bass sounds and big drums, but they were all stripped to make space for these synths to take the spotlight.

Thys: And then about two thirds in, there’s a variation of that sound where it becomes rhythmical. For me, that’s where our “story” takes a turn — where the record finds homeward momentum.

Funny how much we had to travel and move to write a record about trying to find home…. This song was started with that sample made in our old studio in Groningen. We started working on it together in Amon’s old place in the Sequoia woods near San Francisco, then we picked it back up years later in Amon’s current place in L.A., and then we did the finishing touches online, sending files back between my new studio and Amon’s. It’s quite a journey this song has gone through….

Amon: This one is actually mostly just a live improvisation we recorded together. Thijs is playing the keys on the Haken Continuum while I’m changing the modular patch. It’s a bit of a fortunate accident how it came about, but we really struck gold in that moment. We hardly changed it; just added a couple of sounds toward the very end.

Thys: Yeah totally. And then we forgot about it for months!

Amon: Haha, yes! It took a while before we rediscovered this one and realized what potential it had.

Thys: When those high notes hit, about one-third in, that’s where we come home. That’s where we recognize the hills and the birds of the home country. That moment, and the feeling it gave me on a walk back from the studio one day listening to it on headphones, is what inspired the concept, the structure, the titles and the artwork. All from that one little improv on the Haken and the modular!