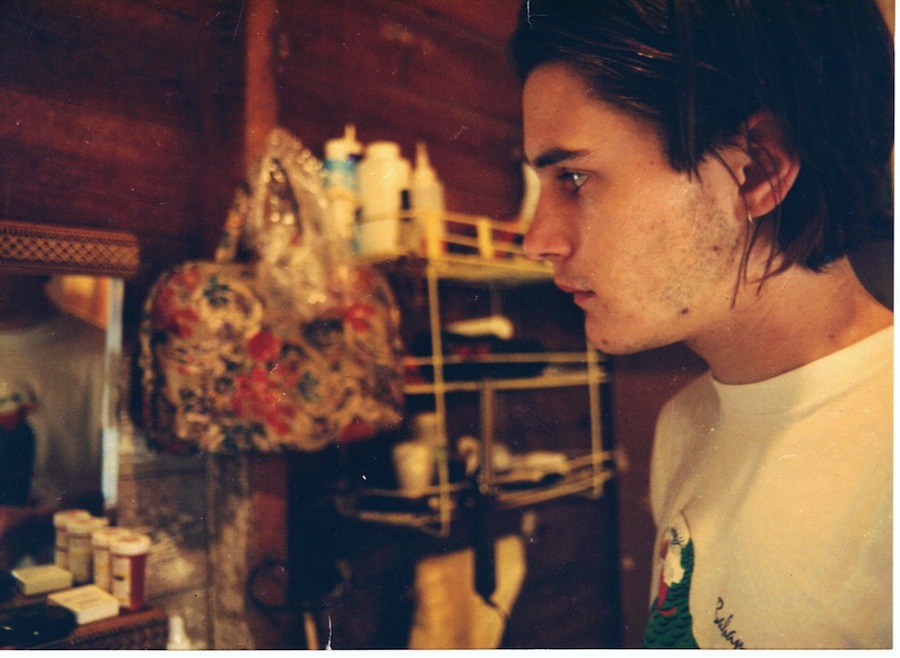 As if he’s not already busy enough with ongoing work alongside Om, Grails and Lilacs & Champagne–a Madlib-indebted duo who’ll drop their own new disc in a couple weeks–Emil Amos also has a revealing archival release on the way through Important Records on April 23rd. Entitled My Only Warm Coals, it’s a bonus track-packed exploration of Amos’ early four-track days as Holy Sons.

And since the producer/multi-instrumentalist/singer doesn’t like taking the easy route with anything, he offered us quite an exclusive this week: the premiere of his VHS-splicing “Aged Wine” video alongside a personal essay about the impetus of the project way back in the early ’90s… When I saw Sebadoh open for Fugazi in ’91 at the old Cat’s Cradle in Chapel Hill it was my meditation-rod moment. Like when the guru hits you hard with a stick and confusion dissipates as you slowly realize your place in the universe. While proselytizing over drinks at a party I might proclaim that I witnessed the greatest band in the world pass the torch to a whole new breed of chaos, aggression and inner-loyalty. But the imaginary torch-passing I saw was probably just a projection of the quasi-religious transition from hardcore to lo-fi occurring inside my over-active teenage mind.

Ironically, after that intense communion, I ended up spending the rest of the ’90s completely outside of the music world, recording daily in a basement as a self-styled form of experimental therapy. After a blinding light had been shined down into the caverns of underground music post-Nirvana, I’d felt like the party was over and retreated for about 10 years to do what I did alone…a ritual that friends often remarked ‘wasn’t even music at all’. I took their sentiment as a huge compliment but also confirmation that I didn’t belong anywhere and ultimately had no consumable or listenable worth.

The more LSD began to dominate my recording approach, I began to imagine the 4-track as a radical mirror that could capture human capacity in its most uninhibited & raw form. I’d assumed (naively, but with the advice of the Tao Te Ching) that the deeper one goes into themselves, the more applicable the fruits of their discoveries would be to someone else later on.

I originally made Warm Coals as a kind of goodbye to the 4-track era. It was all recorded straight to cassette on an old Tascam and re-sequenced habitually for over 15 years in the backs of cars, on planes and in the janitor’s closet on lunch breaks.

Only now have we really found the relationship with listeners (via the internet) that we’d initially looked for when releasing Lost Decade in ’99. And these listeners have largely helped Holy Sons stay alive by way of giving me a reason to dig for lost recordings and keep releasing new ones.

I really want to say thank you to those people I’ve met who’ve helped me believe that all these years of work lead to something of value. I don’t want to think about how unhappy I’d be if I’d never found more people that I can relate to. 10-4.