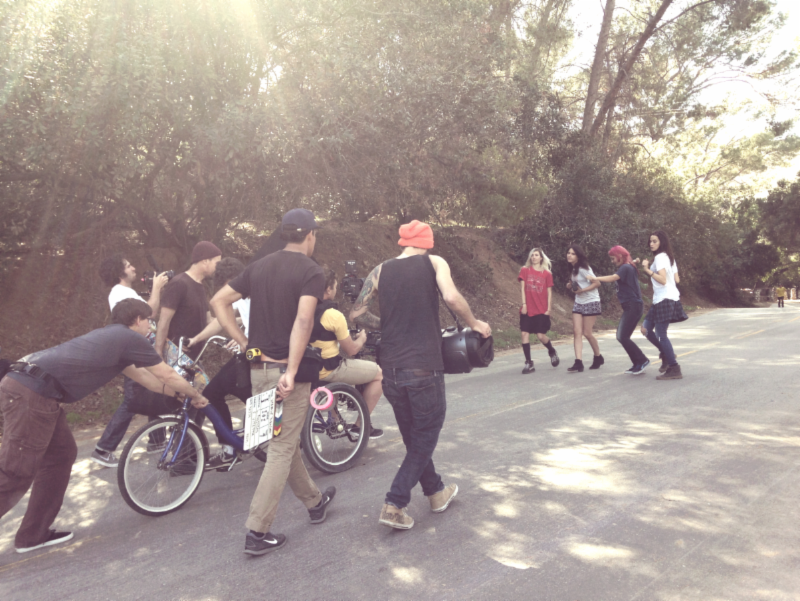 Never-ending music videos are one thing; Warpaint went a slightly different route with the long overdue lead clip from their self-titled album. Available in the player above, it melds two tracks (“Disco//very,” “Keep it Healthy”) together with footage of five LA skaters (Justin Eldridge, Patrick Melcher, Kris Markovich, Rob Smith and Victor Zanoni) doing their thing in the Hollywood Hills. Here’s what director/former pro skater Laban Pheidias had to say about it:

“These Warpaint videos are extra special to me for multiple reasons and not just because the girls are super rad and fun to work with. Having been a professional skateboarder for many years I’ve really been wanting to incorporate skateboarding into a music video. So when this project was presented to me with skateboarding already in the concept I was of course psyched.

Also the fact that [bassist/vocalist] Jen Lindberg and I used to be roommates and my producer on these videos, Mia Kirby, used to be my production manager – there’s a sense of coming full circle with these connections naturally coming together. And I think these friendships really helped the overall tone of the videos. It was of course a huge honor to feature professional skateboarder Justin Eldridge. He is one of the current best technical street skaters out there. He really brought good style, pop and rad tricks to the videos.

The location we shot at is one of my favorite skate spots in LA and as far as I know has never been skated at night. It was super cool to light these ditches up and have a fun night session. I wanted the videos to be as real and natural as possible while having a feel and flow that compliments Warpaint’s songs. I think we did it.”