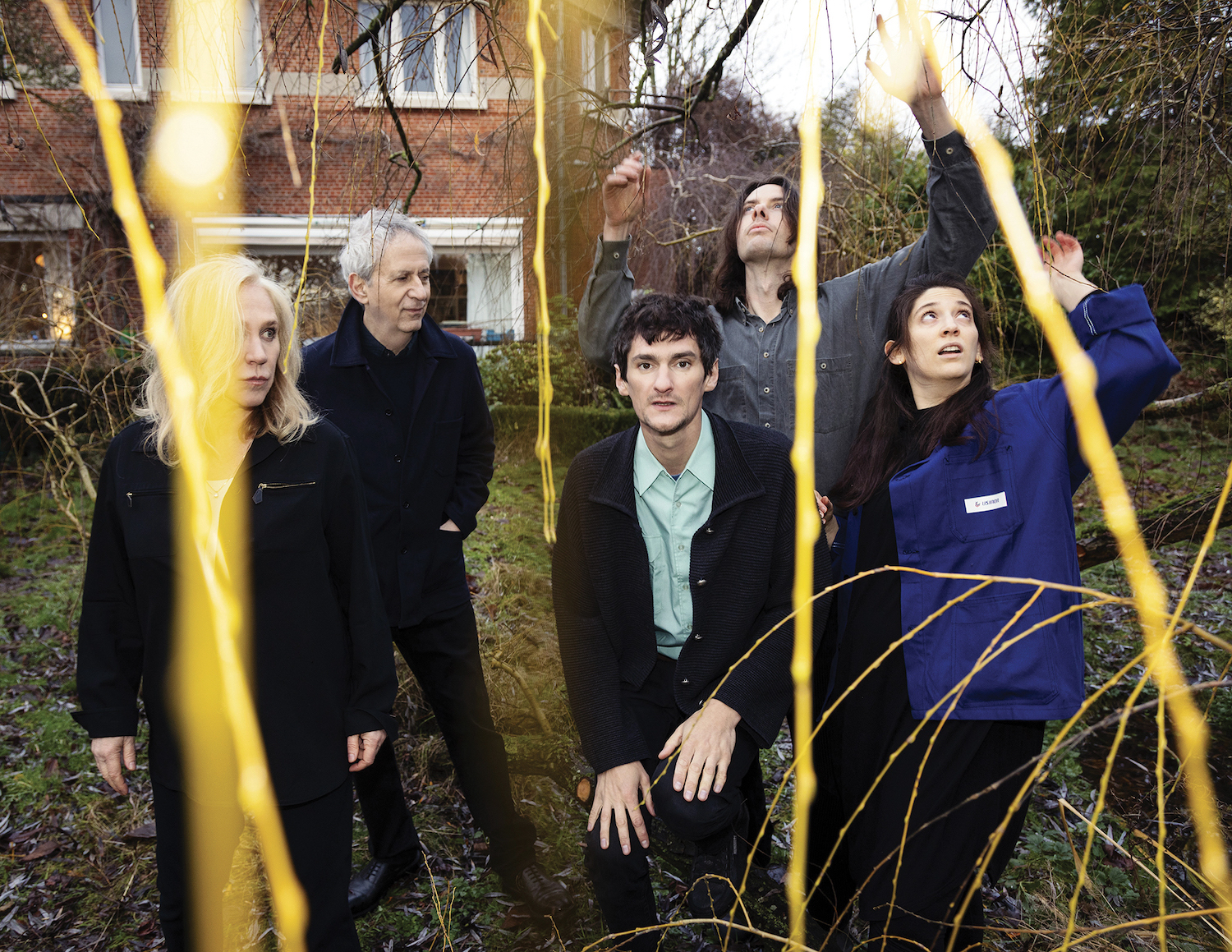 File this one under In Case You Missed It Last May: Figures, a double LP with ambitions as grand and daunting as the down time between it and Aksak Maboul’s last album. (About 40 years if you’re keeping track.)

Founder Marc Hollander was a little busy during that time, largely thanks to the day-to-day duties of Crammed Discs. Or as he puts it, “I spent the next few decades signing, sometimes producing, and releasing over 600 records by lots of other artists, from Tuxedomoon to Acid Arab by way of Konono N°1, Zap Mama, Zazou Bikaye, Bebel Gilberto, Carl Craig, Juana Molina, Yasmine Hamdan and dozens of others.”

Much like his influential underground label, Aksak Maboul has never been easy to explain in a sentence or two. Lazy writers would probably make Stereolab comparisons due to the French lyrics of singer Véronique Vincent, and the record collector references and lounge-pop loops that course through the veins of quite a few tracks.

We’re not going to do that; we’d rather reveal the group’s latest video, and let director Yoann Stehr break it down better than any of us ever could….

I generally base my music videos on various collage techniques. I like the fact that the basic materials preexist — that I need to find, rearrange, and recontextualize them until something new emerges. Images then acquire new meanings they didn’t originally have. I also enjoy not having total control, taking chance and mistakes into account, and staying open-minded about things that occur.

In “Un Caïd,” the lyrics relate to — among other things — writer André Breton without ever naming him. How would I evoke him and the Surrealist movement he founded in the 1920s without being too literal? An idea sprang to my mind: the photomaton! The surrealists were the first to creatively use the photo booth device when it appeared in Paris. They felt it had similarities with the automatic writing and drawing techniques they were fond of. The machine leads the way, and the result partly escapes our control.

The photomaton is a kind of modern-day church stall, inviting us to make intimate confessions,while being situated in a public space…. What an amusing setting for shooting a music video! The five band members were left to their own devices, with only a few basic instructions. They inserted the coins in the slot themselves, and were thus complied to show (or conceal) various aspects of their respective personalities.

The resulting 488 random shots were then complemented by some additional material (such as vintage pics), and the construction work began…. 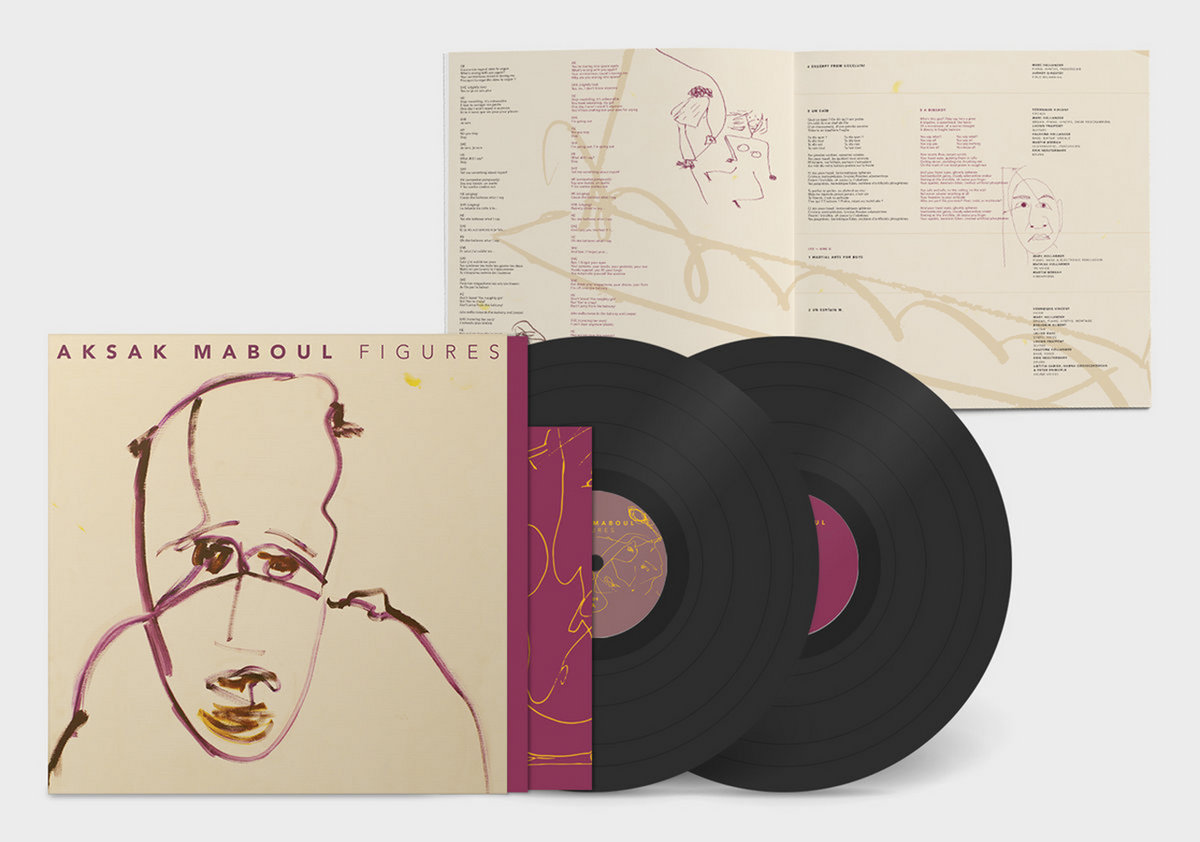 Hollander had a lot to say about the song as well, along with the album as a whole and a little bit of Aksak Maboul’s back story:

“Un Caïd” is one of the more uptempo and poppier tracks on ‘Figures’. It’s one of the first couple of new songs we wrote back in 2017 while touring with the new live incarnation of the band.

This is the second Aksak Maboul video directed by the super-talented Yoann Stehr, after the dizzying “Tout a une fin.”

So ‘Figures’ is the first wholly-new album written, recorded, and released by Aksak Maboul in… no less than four decades!

Here’s the story, in a nutshell: Aksak Maboul started out as my solo project, in 1977, and soon became a duet, then a band with a shifting line-up and an ever-morphing sound, which keeps ingesting new musical elements and reconfiguring them, while remaining within our own aesthetic foundations. We released two albums, in 1977 and 1980 (‘Onze danses pour combattre la migraine’ and ‘Un peu de l’âme des bandits’), whose recent vinyl reissues confirmed their status as avant-garde classics. 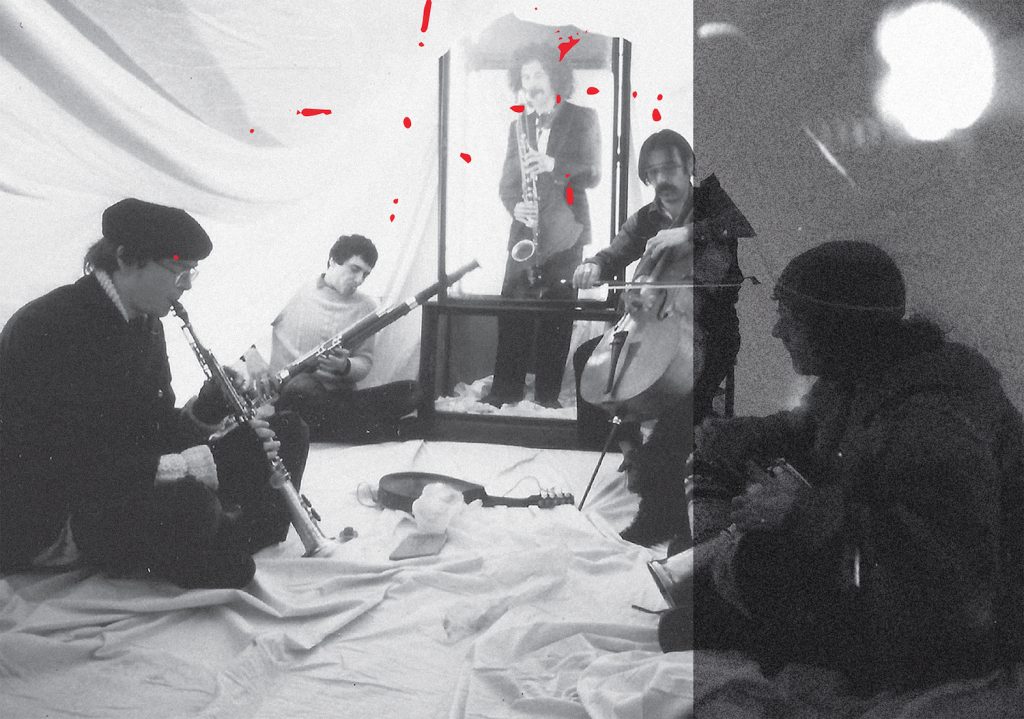 Vocalist Véronique Vincent and I then worked on a third album — a kind of electro-pop extension of the Aksak Maboul spectrum — but never completed it. In the meantime, I founded the Crammed Discs label in 1981, which was informed by the same wide angle musical spirit as Aksak Maboul’s.

In 2014, we finally decided to unearth that lost third Aksak album. Using unfinished tracks and demos, retrieving stuff from cassette tapes, etc., we put together what became known as Ex-Futur Album and released it. The reaction was so enthusiastic that we were convinced to return to the stage and form a new live version of the band with three young musicians. After re-rranging the rediscovered old songs and touring across Europe, our appetite for writing new material
was seriously whetted….

Writing and producing ‘Figures’ was an immensely exciting and fun experience. Véronique & I followed parallel courses — she with her lyrics and me with the music, which draws from all the various genres and styles I’ve always been inspired by, from electronic music and pop to experimentation, jazz, minimalism, contemporary classical, etc. We used electronic and acoustic instrumentation, improvisation and programming, songs, beats, found objects and sound collages, melodies and abstract textures, which were all weaved into this 22-track suite.

The album was mostly recorded by Véronique and I in our home studio with our daughter and bass player / keyboardist / vocalist Faustine Hollander assuming co-production duties. The other band members (guitarist Lucien Fraipont and drummer Erik Heestermans) made significant contributions, and we also invited several old and new friends to sit in: the iconic Fred Frith, Tuxedomoon’s Steven Brown, Aquaserge’s Benjamin Glibert, Audrey Ginestet & Julien Gasc, and several others. 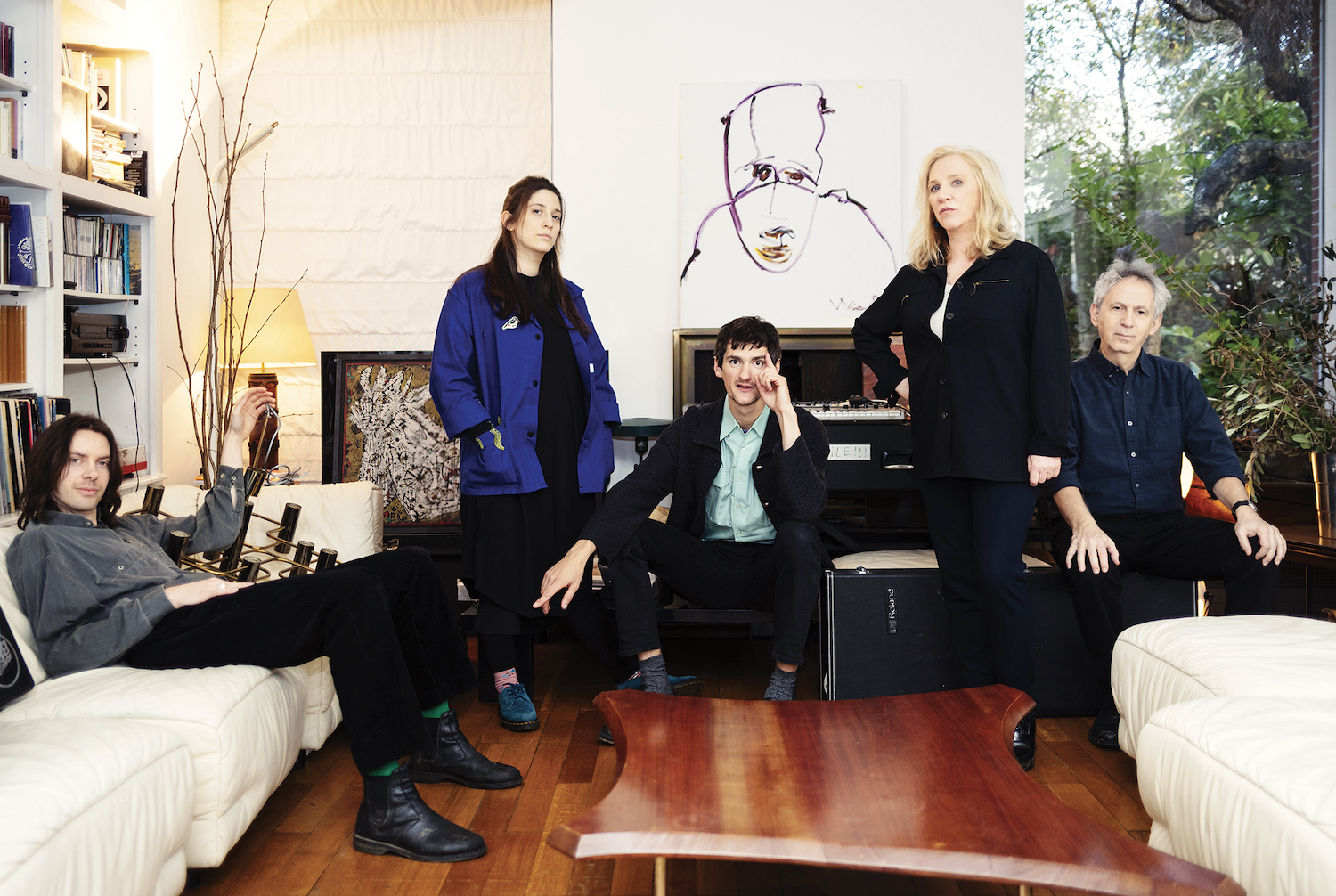 Thirty shows were planned for 2020, but these plans are obviously postponed. We managed to rehearse and film a new live set though.

Alongside the music video, we’re also releasing the ‘Un Caïd’ EP, which contains a radio edit and four reworks of the track — one by Brownswood artist Hello Skinny (a.k.a. Tom Skinner, drummer with Sons of Kemet); one by Spooky J (from UK/Uganda band Nihiloxica); one by Chicago house veteran Jordan Fields; and a self-reconstruction by ourselves (Eyelids & Phosphenes), which starts off as a remix and morphs into a wild new piece, with fresh vocal, keys, and horn parts.

Several remix EPs will follow, and we’re already working on a new album, which will be quite different from ‘Figures’.

And now, the lyrics to “Un Caïd,” along with a Bandcamp-powered stream of the entire EP…. 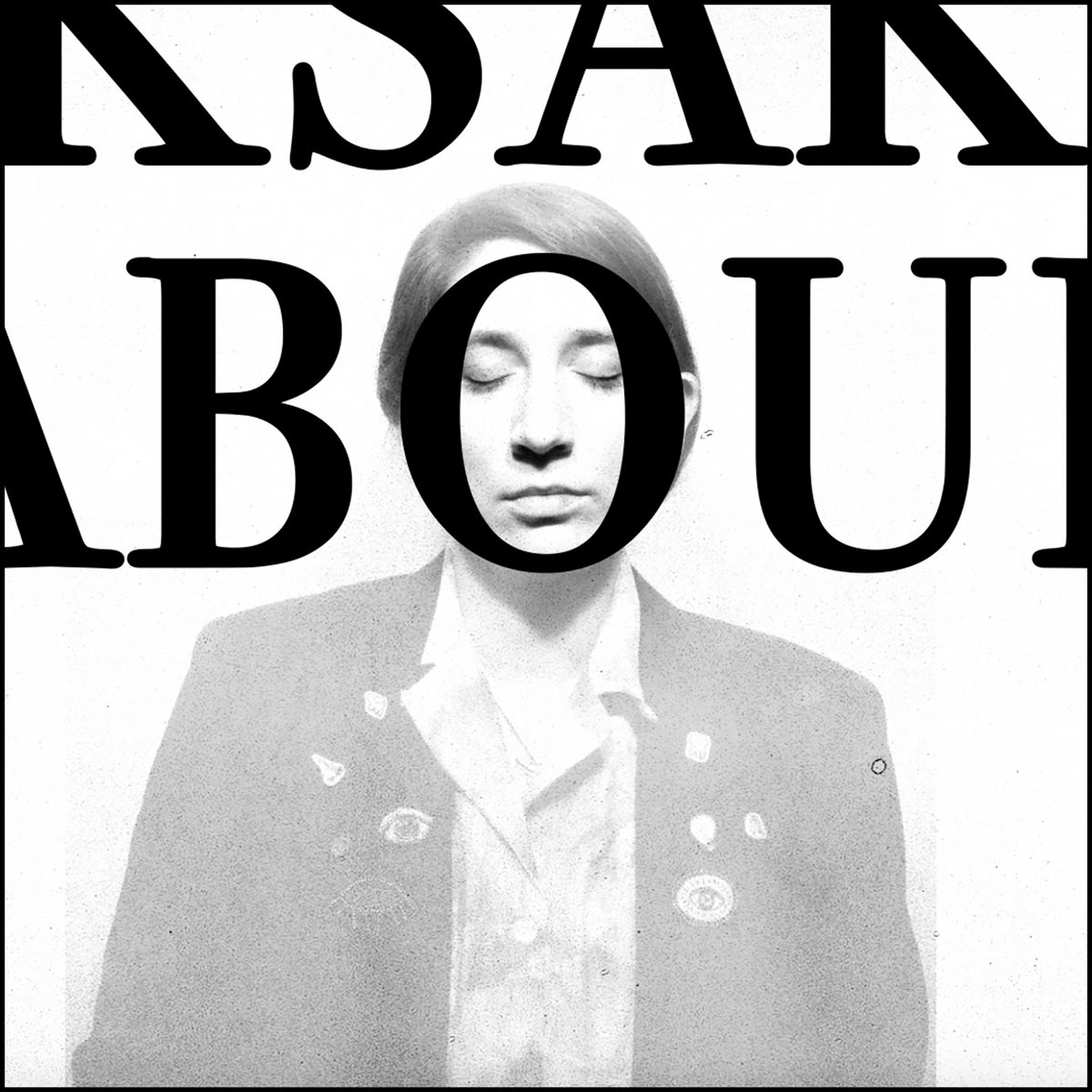