ARTIST OF THE MONTH: Chelsea Wolfe 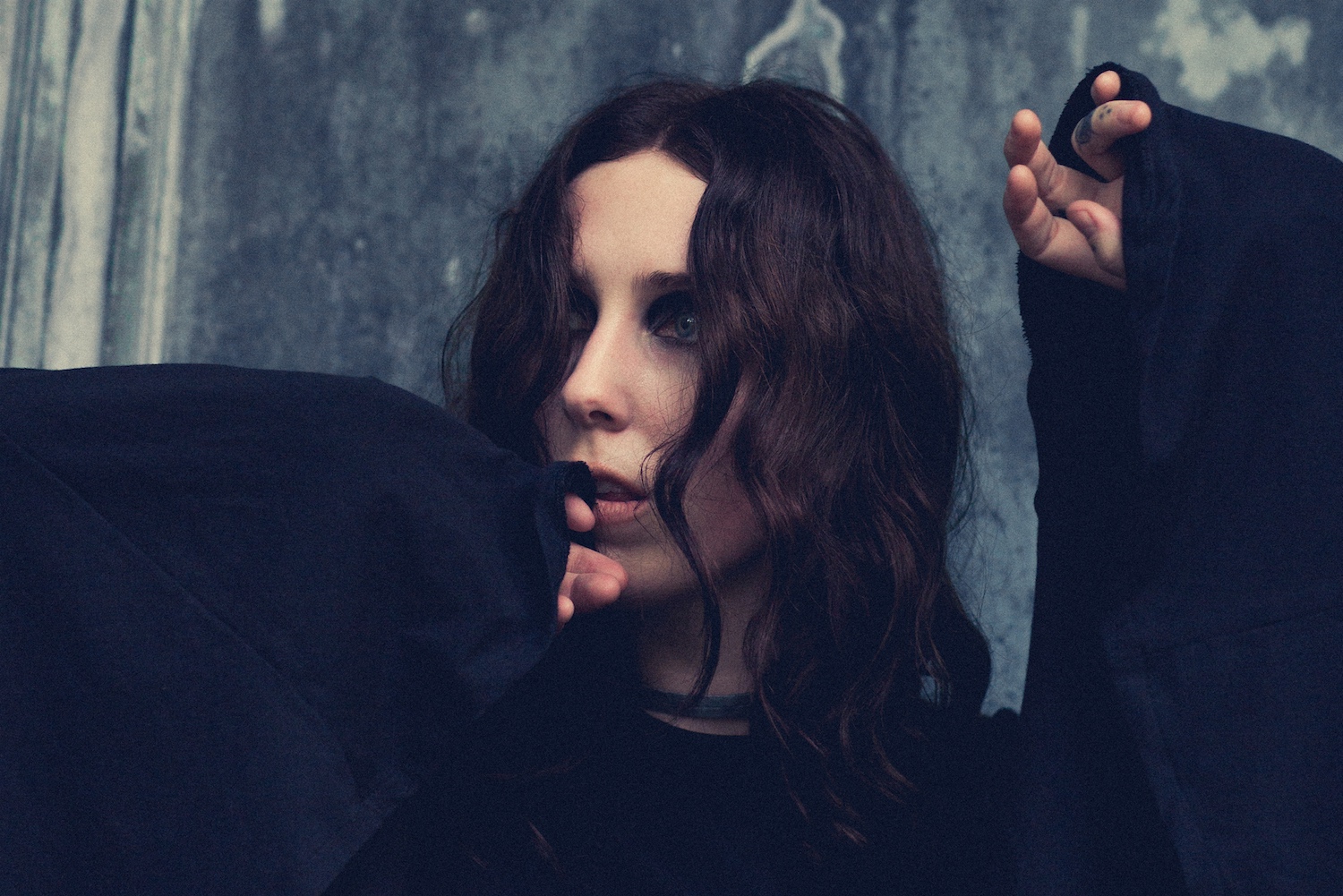 The world needs more songwriters like Chelsea Wolfe. There is an oppressive intensity to her music. Riffs crunch and synthesizers tremble as she howls about the extremes of human experience. But like the Greek figure Themis—the Titan goddess of “good counsel” and ancient embodiment of divine law—Wolfe manages to create a sense of balance, pulling hope and redemption out of the gaping void.

Consider her song “Iron Moon,” the second track off of her latest album, Abyss. It swings back and forth between doom metal and folk, and in the lyrics Wolfe yearns to find hope in the hopeless: “In all the worlds decaying / Is there place that’s safe for us?” The lyrics are inspired by a Chinese factory worker who was so crushed by his menial profession that he leapt to his death out of his dormitory window, but not before leaving behind a collection of poetry documenting his inner turmoil.

“He was just in love with books and words and wanted to explore that more,” explains Wolfe, “and he couldn’t do that back home and he couldn’t really do that here either, so he just kind of gave up and left his poetry behind. I was totally struck by that, and I tried to imagine that instead of dying, he was able to be free somehow and get what he wanted. It’s obviously very idealistic, but I have to do some idealistic stuff sometimes, because otherwise I’ll get too dark.”

As hopeful as Wolfe’s music is, her artistic vision is obviously a bit more bleak than, say, Belle and Sebastian. But these are intense times we live in, so it makes sense. And as a matter of fact, Wolfe takes a lot of inspiration from real life. Her songs borrow from narratives told in documentaries and news stories, and the title for Abyss—which came out on Sargent House last August—is derived from a passage in Carl Jung’s autobiography Memories, Dreams, Reflections. Published posthumously in 1963, the book expounds on the possibilities of dreaming, and Wolfe was taken by one particular line that described one particular experience of entering a dream state: “I was sitting at my desk, and I just let myself drop.”

“I already had that abyss concept in my head and it fit so perfectly—dropping into your own mind,” Wolfe says. She’s sitting at the end of a large dining table at the Los Angeles headquarters of her label Sargent House. It’s a hot summer afternoon, and sun glares in from the patio windows while German folk guitar emanates softly from laptop speakers. “I like things that are visual like that. You can close your eyes but you can still see it and feel it.”

Wolfe, 31, grew up in Sacramento, California’s state capital, which happens to be home to a lot of off-kilter underground artists, including Zach Hill of Hella/Death Grips and the “horrorcore” trailblazer Brotha Lynch Hung. She was never really part of the local music scene, though; it wasn’t until she was in her early twenties that she took her lifelong interest in music to a new level by performing and releasing material, and she relocated to LA when she decided to pursue her career seriously.

But Sacramento still has an influence on her. She grew up in the old part of town, near a network of train tracks and a locomotive museum (and also, according to Wolfe-ian legend, a neighborhood graveyard) and she fondly remembers the trains chugging by.

“I just love the sound of trains,” she says. “I feel like a lot of my songs are really repetitive in that way, really trance-y.” In person, Wolfe has a disarming demeanor. She’s wearing a black gown and thick eyeshadow, with long locks framing her face and tattoos on her arms. But she occasionally twirls her hair, and she speaks with the laid-back inflections of a native Californian. She’s long been interested in fashion; her music videos show her in stunning outfits and makeup, and she takes to heart the words of Japanese avant-garde tailor Yohji Yamamoto: “Perfection is ugly.”

But she doesn’t want her interest in fashion to make it seem like she’s trying to be some kind of “goth pop star.”

“I’m just trying to do my own thing,” she says. “I’m not trying to be some sort of genre or pop icon or something. Every so often I kind of get a notion that certain people think I’m more image-based than I am. It’s all about the music for me. Fashion has just kind of been a way for me to have some sort of armor, because it has been hard for me to get onstage sometimes. I get stage fright, I get anxiety about it, and getting ready and getting dressed up and wearing things that you like—your favorite dress or whatever—makes you feel stronger, and you can kind of go out there and forget about everything else.”

Musically, Wolfe has navigated both naturalism and industrialism. Like her favorite filmmaker, Werner Herzog, her songs tend to move to extremes—reflected in her visually-grasping lyrics, but also in the grimy, post-industrial textures of her and her band’s guitars and keyboards. “Boyfriend,” a warbling acoustic ballad off her 2012 album Unknown Rooms: A Collection of Acoustic Songs, culminates with a Juno synth line that hobbles along, big and grey and sadly triumphant, like a prisoner on the way to the gallows pole.

Abyss is Wolfe’s fifth album, and it’s her most powerful thus far. It was recorded in Dallas with producer John Congleton, who also works with St. Vincent and recorded Swans’ epic 2014 album To Be Kind. Wolfe says he pushed her in a more raw, vulnerable, live-sounding direction, and it can leave a listener drained by the end, mentally and maybe even physically. But sonic experimentation also offers its own pleasures.

Few of this year’s songs are as earth-flattening as lead single “Carrion Flowers,” which cranks along like some kind of post-NIN death machine. Ben Chisholm, Wolfe’s bandmate, explains that the main riff came out of extensive tinkering pre-production and in the studio. “[It] was created by a mix of a percussive hit running out through a speaker which I held a guitar against,” he explains via email. “So one sound playing back through the guitar pickup and pedals, creating a whole other tone. Then when we went in with Congleton, he ran it through his fucked up filter and made it even harsher than the original, re-amping that noise again.”

Abyss as an album took root in the mystical desert landscape of Southern California’s Joshua Tree National Park. Wolfe and Chisholm went there in 2014 to work on a fashion video for the designer Andrea Doria. The area, with its gnarled trees and rocky cliffs, has long been a magnet for creatives, and as the two musicians spent three days out there working on a project based on Jodorowsky’s The Holy Mountain, Wolfe took a liking to the music they were creating. Reworking some of it, she ended up making what would become Abyss’ eerily quiet, piano-plinking title track.

“That’s kind of where [Abyss] came from,” explains Wolfe. “It just happened. I wrote the song in one day, and I was just stuck on that word. The first thing I always do when I find a word I like is just look it up in the dictionary. It had so many different meanings that were all very visual. A chasm. A dark underworld. An infinite space. I just kind of started thinking about different ways to apply that and translate that. Thinking about the mind as this deep abyss to be explored, and thinking about the universe as this endless abyss, and just like how everything relates.”

In other interviews, Wolfe has talked about how the album explores her own sleep paralysis, an experience where she sometimes finds herself awoken in the early hours and visited by mysterious specters. The album captures this feeling in its own wraith-like way. The instrumentation moves lucidly through doom-metal, industrial, avant-garde and folk, while the lyrics flicker with elusive imagery: shadow beings, dripping tongues, ghosts rising up en masse to seek revenge on their killers.

All of this manifested in a different way when Wolfe played a sold-out show at LA’s Regent Theatre last month. “You fucking rule!” somebody in the audience yelled, as her band’s arms flailed and riffs clapped like thunder over Wolfe’s brooding lows and howling highs. The quartet had all the ferocity of a rock group, but synth lines also swooped in over the top to make the performance all the more consuming.

It’s easy to see why an artist like Wolfe might fit in well in LA. The city itself can feel like an endless urban abyss, where the artifice of Hollywood creates a fermented runoff of weirdness and cultures build up in pockets with little chance of overlapping. However, Wolfe actually escaped the city to write the new album, setting up a homestead in a remote mountainous region north of the city.

“Once we started writing it, I wanted to get out of the city and get away from everyone and everything,” she says. “It really worked out. All there is to do out there is either explore, go on a walk or something, or just work. I basically just started writing right away and I [finished] so many songs out there.”

The move helped her get into a better mind space, and even helped her sleep better. Naturally she doesn’t go into detail about the exact location of this new abode. While plenty of musicians these days have become adept at leveraging their lives to cultivate personal “brands,” she values her privacy.

That’s not to say there isn’t something disarmingly intimate about her music, however. The stories she sings might not always come from personal experience, but they certainly explore notions of the human condition. Some of her best songs are about people who are connected—in life, in sleep, and in the great beyond. And there’s a certain magical thinking that goes on too.

“When I was a kid I always had a really big imagination,” explains Wolfe. “But it was all in my head…. Everything was this musical and everything was really graceful and beautiful, but none of it was actually there. I was always just able to project this idealism onto situations. Maybe it’s just a coping mechanism or something, but it’s been a way that I’ve been able to write all my songs.”

Last year, when American culture was rocked by the news that veteran funnyman and actor Robin Williams had committed suicide, Wolfe’s band was on tour in Amsterdam. That night, they were caught in the middle of an enormous storm, and at one point a thunderclap reverberated in the skies for a full 17 seconds. “Not that it relates or something, but of course in our minds it did,” she says. She ended up re-watching Williams’ 1998 film What Dreams May Come, and writing the smoldering folk ballad “Maw” about a similar situation of two people entwined to each other through silence and distress.

The wonderful thing about Wolfe is that she’s able to acknowledge the fucked-up-ness of the world, but also offer a release valve or escape from it. Too often in music it seems like you can only have one or the other. But in her black gown, with a powerful voice that reaches from Hades into the heavens, Wolfe represents a more complex vision of life.

“I think people think of the concept of hope as really cheesy sometimes, but I’m kind of into it,” she says. “I think that sometimes we need that to survive.” # with Urfaust
* with Low
^ with A Dead Forest Index
% with A Place to Bury Strangers
! with Evil Superstars
$ with Dylan Carlson