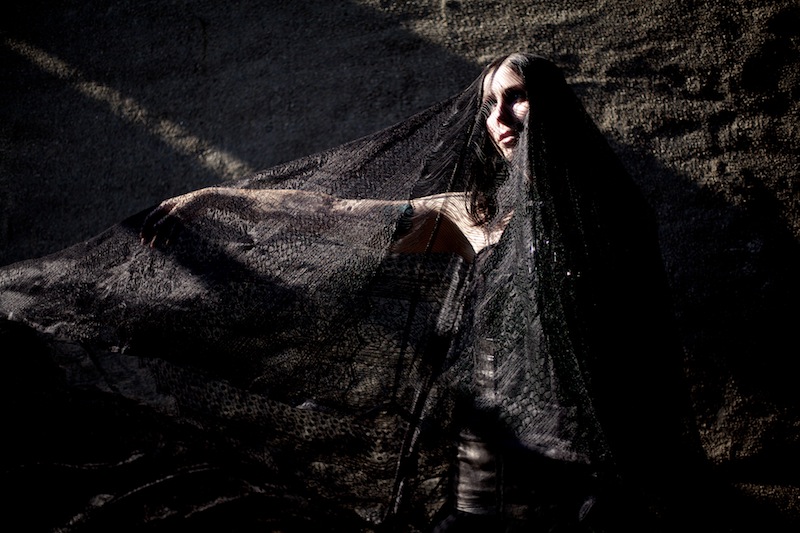 The blood-curdling scream that sparks Chelsea Wolfe‘s second Pendu Sound LP (AÏ€Î¿ÎºÎ¬Î»Ï…ÏˆÎ¹Ï‚, the Greek word for “Apocalypse”) could easily double as the screen test for a throat-clearing demon, the kind of cranky poltergeist that maintains the body count in midnight movies like The Grudge. And yet, as highly theatrical as “Primal/Carnal” sounds, it’s essentially a caustic palate cleanser for a much deeper listen; a downward spiral disc that delves into theology, The Road and Ayn Rand without losing sight of the hooks at hand. Similar in spirit to doom metal in the way it seems to march slowly into the sun, it’s explained in part by Wolfe in the exclusive track-by-track commentary below, and will be fully explored in self-titled‘s thirteenth iPad-enhanced issue next month…

“I often think of Death as a character. I have a strange sort of an affinity for him.”

I wrote “Mer” after flooding myself with a slew of documentaries about world poverty, food and water issues–the end of the oil age, etc. etc. It’s a string of words that came to me when I couldn’t sleep; images of the terrible and the good, blending into and over each other, admitting how bad things can really get in certain places or homes.

“Tracks (Tall Bodies)” is the love song on this album, directly influenced by a poignant moment in Atlas Shrugged when the main character is looking into the distance and thinking of her true love, her equal, at the end of the tracks.

“Pale on Pale” is an exploration of the moment of death and the idea that in that moment of death one’s mind is truly and finally clear. Not thinking of my own death or anyone’s in particular; just a question into this moment and a sort of scientific/spiritual response. I often think of Death as a character. I have a strange sort of an affinity for him; probably because I’ve never really been faced with him outside of dreams.

“Demons” and “Moses” have a more surreal sense to them and speak to my own issues with human energies and paranoia about allowing others to get close.

“To the Forest, Towards the Sea” was the last song added to album and was recorded a few days after watching The Road. I was intrigued by this movie. I like how the focus is on the aftermath rather than the event–the survival and the struggle, and what reveals itself to be most important in that kind of situation. I saw the film first. I have the book in queue on my shelf.

“Friedrichshain” is the song with the most innocence on the album, although innocence isn’t something I consider a lot. I think about integrity, because once there is that loss of innocence it’s more about how you choose to live your life. When I look at my childhood I always think, ‘I never was a child’. From a young age, I understood that things were dark and sad and somehow sometimes good even despite those things. Innocence doesn’t really fit into that worldview but it’s not a negative thing. “Friedrichshain” is about finding yourself in this childlike vision of an enlightening, sparkling forest. Something that makes perfect sense.