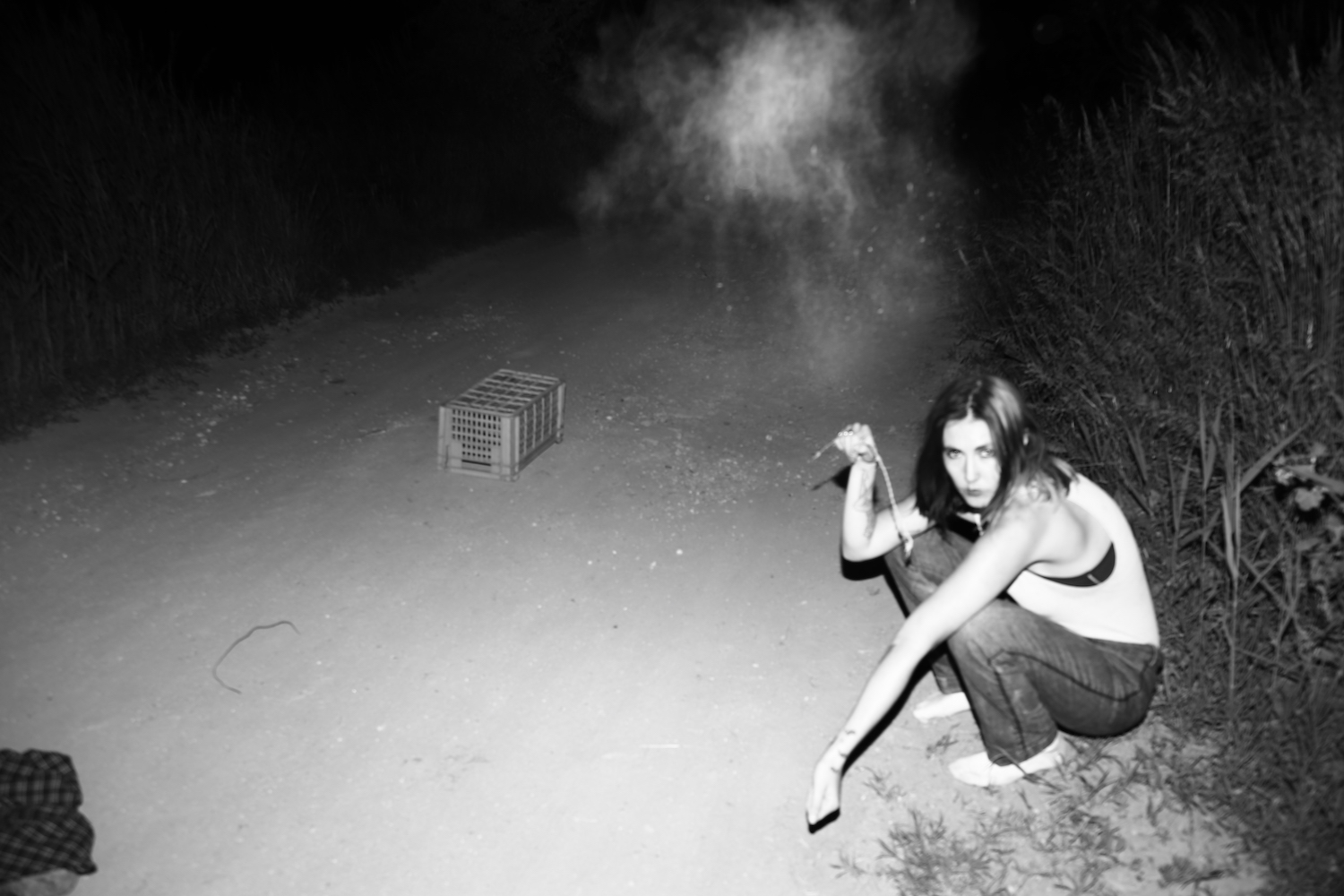 If that sounds like one long riddle, you’re about halfway there. Like her six albums with CocoRosie—including last September’s Heartache City LP—Casady’s new band the C.i.A explores fantastical shades of darkness and light, although it’s more of a murky, gleefully manic proposition than her full-time gig. Crimson and clover, that kind of thing. In the following exclusive, we share the #selftitledpremiere of “Roadkill” along with a quick conversation with Casady herself…

Can you start by telling us the story behind the song “Roadkill” and its video? Is the footage taken from one of your “Porno Thietor” performances?
Near Christmas time two years ago—not celebrating Christmas—I found a dead falcon on the side of the road. I stopped and picked it up. I took it home and carefully removed the talons and wings and tale feathers. I created a fan with the tale feathers attaching them to an old silver spoon. I did a photo shoot in my “Black Room” studio with Biño, with whom I had been working on many characters. We discovered The Sacred Clown.

My father always slammed on the breaks when he saw roadkill on the highway. I reflected on these memories and embraced a few new found similarities between my father and I. “Full circled, you may have turned me away from magic but not away from madness.” As an artist I have explored madness and even excepted aspects of it in my creative process.

How did your first leg of C.i.A gigs go? What can North American audiences expect from it when you tour here next year?
I don’t know yet if I’m going to tour.

While most people are going to look at your solo work as a new project, it’s something you’ve been developing since the ‘90s right? How has it changed over time in that case?
I have been creating solo work through out my life before and parallel to CocoRosie. This latest musical endeavor is more like a soundtrack to the theatrical and visual work that I have been developing for many years. Poetry always at the center of each work.

In the press release for this project, you said, “I often played the dark side of CocoRosie. And now I don’t have to worry about being too dark, too scary, too weird.” Can you elaborate on that? Has working on this solo record felt liberating in ways you didn’t expect? Have you felt like you’ve had to hold your dark side back a bit when writing CocoRosie material?
I have always fought for the dark side in CocoRosie. Perhaps now I get to explore the nuances of the dark side, which have their own mysterious beauty. I way very taken by the fairytale The Handless Maiden, about a young woman whoes hands get cut off by her father in a poor deal he makes with the devil. She goes on a perilous journey in the underground forest. She is brave and eventually her hands grown back and there is at last happiness and beauty. Beyond simple concepts of darkness and light, how are you and Sierra different and similar?
I am a deconstructionist. She thrives on order. I like to make a mess out of things and throw them at the wall then stand back and read the mess for mysterious messages. She likes to clean it all up.

God and the devil have informed your lyrics over the years. Are you religious or spiritual in any way, or are you merely haunted by the ideas that religion invokes?
For me, god and the devil are a part of my fairytale language, archetypes which can have many representations. The devil is often my father in my stories. He thinks he is god so then they too become interchangeable. God also represents patriarchy to me, which can also be the devil.

What can CocoRosie fans expect from the rest of your solo record in terms of its themes and musical direction?
Musically I have ventured into the taboo world of rock. As always there is a current of blues. The sound is old timey and handmade. Sometimes I imagine the songs made by a gang of children using spoons and sticks and clapping along.

Previous Knxwledge On… The Songs That Shaped Him, From Mobb Deep to Gil Scott-Heron
Next Rustie Shares DJ Set From XOYO Party