BREAKING: An Interview With … Laurel Halo 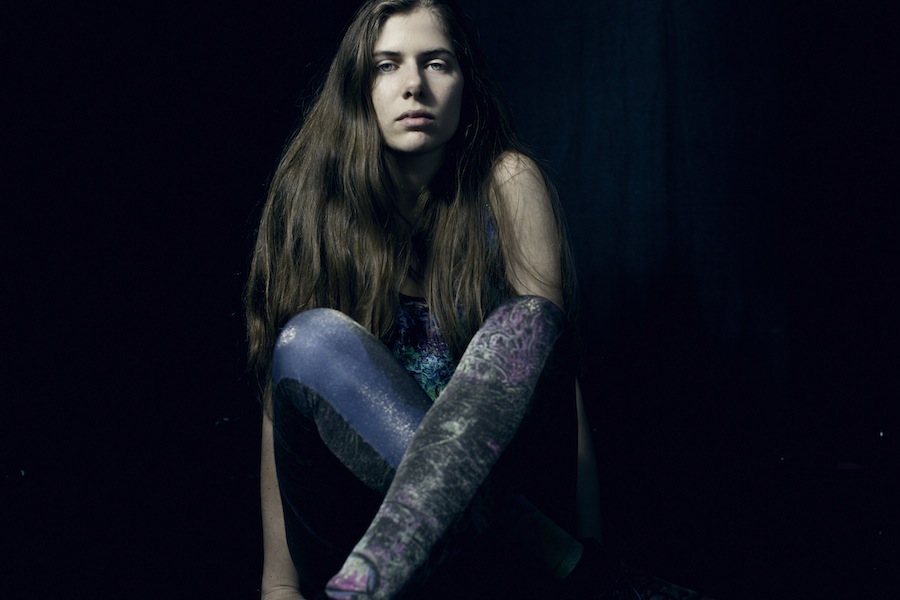 As literal as the lyrics seem to be on Laurel Halo’s first proper LP (Quarantine, available now digitally through Hyperdub), the singer/producer makes sure to present each line in a way that’s as unsettling as her lucid tales of obsession and unrequited love. It’s as if she’s filmed a free associative YouTube confessional, then filtered it through fog machines and amniotic fluid.

“I wanted the record to emulate feelings of suffocation and isolation,” she writes, via email, “taking illness and nausea and turning them into something transcendent and continuous.”

It works, especially if you have the patience to let Halo’s weightless, free-floating world seep into your pores. Only then will you realize why this record is one of the year’s most rewarding repeat visits–a challenging descent into a decidedly human version of the unknown…

self-titled: You gave your earliest Laurel Halo EP away just two years ago. What have been some key factors in the way your writing and general approach to music has changed since then?
I’ve written fewer songs at the piano, written more tracks, become more obsessed with sound and texture and stopped relying on specific harmony or chords to guide writing. My gear and ears have both gotten better. I think the writing and flow has stayed consistent on all the releases despite stylistic shifts; “Metal Confection,” in particular, reminds me a lot of “MK Ultra” on Quarantine.

You grew up close to Detroit. How often did you actually visit the city to see shows or buy records?
I went to DJ nights and shows; I have really fond memories of New Year’s Eve and going to DEMF and other summer music fests. There are often good shows at MOCAD and CAID and Scrummage and Trumbullplex, in addition to more boring mainstream clubs that happen to bring in incredible artists.

What were some of your go-to records and artists during your stint as a DJ at a freeform station in Ann Arbor?
When I had the graveyard shift, I enjoyed putting on Dave Solider & Komar & Melamid’s “Worst Song in the World.” It both ate up a chunk of time and inspired callers to reach out, for better or worse. [Laughs] I always enjoyed playing local releases or diving into the jazz section. I had a lot of fun one year doing a show with Matt Endahl and Cobo, both of whom make crazy music; Matt makes music with solo piano & electronics coming from a heavy jazz background, and Cobo makes these wild geo-gritty techno jams.

How did the overall vibe of Detroit–its tie to the automobile industry, ongoing economic struggles and rich history of electronic music–impact you, both personally and creatively?
My mom was born in Detroit. That’s where my family is from…She grew up in a Catholic family of six and they stayed through the ’80s. She always reminisces about Detroit; she and my dad met and lived there in the ’70s and ’80s. Growing up, my mom and stepdad both worked for the auto industry, and my stepmom still teaches in Hamtramck. I remember visiting the Penobscot Building a lot when I was a kid ’cause my dad worked there. As a teenager, I started going to shows there that continued through college and after, so there’s a connection with seeing live music. Several friends lived or currently live there.

I’d like to move back at some point. People that have come out of Michigan are so inspiring. There’s the lineage of Fortune Records and Motown and jazz, Elvin Jones, Donald Byrd and Alice Coltrane, blues, techno, the Belleville Three, massive producers like Carl Craig, Drexciya, Robert Hood/Jeff Mills, Theo Parrish. I could go on and learn forever about the birthplace of techno and still not have those holy grail keystone 12’s or remixes…Then like the Stooges, MC5, Andrew WK, Wolf Eyes, J. Dilla, Madonna, Stevie Wonder and Aretha Franklin–it’s so crazy. Eminem and Kid Rock and ICP too. [Laughs] There’s so much about Michigan music I have yet to learn still too; it’s so deep. I think there must be something about Michigan…

The painting on the cover of your Antenna cassette is by your father. Is it fairly recent, or quite old? Did you grow up in a musical/artistic family? If so, what are a few things you learned from them?
That painting is from the early ’70s. I hope to one day reissue Antenna on vinyl so the art can be justified with a proper sleeve. My family wasn’t musical, but my dad is a visual artist, as well as my stepmom. My mom is also into photography. I’m not sure how it transferred really!

You worked on a rather rad improvisational synth record with Daniel Lopatin, James Ferraro, David Borden and Sam Godin last year. What were a few takeaways from that experience–how did it compare to working with a band, and would you like to do a group improv record like that again?
It was a great experience. I learned a lot from Borden and enjoyed jamming with Dan and James greatly. Borden’s stepson Sam is a great player in general; he would do these really proggy lines on his Moog that were sick…It didn’t feel like a band as much as a group improv, which I would love to do again in the future.

Your new Laurel Halo record and recent King Felix EP are decidedly different from one another. Are you approaching each of those aliases with a very specific aim now, almost as if you’re using a different part of your brain for King Felix records than you use for Laurel Halo ones?
I have a lot of different musical interests, so it’s helpful to separate them sure.

On the surface, King Felix seems to be your â€˜dancier’ side. What are some other clear divisions between the two?
Primarily LH has songs and KF will be tracks, although that doesn’t mean that LH won’t have dance elements or KF doesn’t have vocal samples. But I play KF tracks live as part of the LH set currently. Maybe this will change in the future; I’m not sure.

You’ve used vocals in the past, but never as a dominant element to the degree they are on Quarantine. Was that your goal from the beginning with this album? And if so, what sparked your move in this direction?
I wanted to sing on the album because there was a lot that I wanted to get out through lyrics.

Do you ever see yourself going back to your classical training and writing a spare record alongside the piano and violin parts?
I’ve thought about making records with just piano–sure!

You manipulate your vocals on the record quite a bit, to the point where they sound inhuman or like several versions of yourself having a conversation with one another. Was that your goal here–to present the vocals not only as a primary instrument, but as this living, breathing thing that almost takes on a life of its own?
I wanted the vocals and lyrics to sound like another sonic component and not have this strict division between vocals and synth lines or samples or texture. I wanted the vocals to sound ugly and crisp. [Laughs]

You’ve mentioned that male vocalists were a major influence on this record, maybe even more so than female artists. Can you elaborate on this point?
The issue here is the backwards idea that a male vocalist has a strictly male perspective and a female vocalist has a strictly female perspective. To me, there’s no difference; it’s just music at the end of the day. To box people in based on the range or timbre of their voice is such a limited way of listening. I’m inspired by a range of vocalists both male and female and I don’t have a sonic preference for either. Plus people are image obsessed these days and give weight to that before the music too which is not where I’m coming from at all. Take classical music or techno–there’s little to no importance of the look of the composer or producer. The cover art for Quarantine is quite intense. When did you first stumble upon Makoto Aida’s artwork? Was it difficult to secure the rights to it? Without giving too much away, how does it relate to the music inside beyond reflecting its general sense of unease?
I first saw it at a show last year and fell in love with it. Hyperdub came through with getting permission. It was so exciting when it came together. I love how violent and happy it is; I guess I have a pretty dark sense of humor! In general I love his work. It’s really twisted.

What are your plans for King Felix in the near future? Will there be an album eventually or are you strictly releasing 12-inches through Liberation Technologies?
I have some tracks up my sleeve, but I’m not sure when or with whom they’ll be released!

What was your immediate reaction to Mute asking you to essentially help launch their new Liberation Technologies imprint? Were you already a fan of the label? If so, what are a couple of your favorite Mute records and/or artists and why?
I was really excited! Mute has an amazing history, so I was honored when they got in touch. Depeche Mode, Luke Slater, Plastikman–so many classic artists have released on Mute.

What else can we expect from you this year? Was your recent Unsound set a good indication of where you’d like to go next with the live show–a nice mix of your experimental pop and dance music sides?
More recordings, new tracks for the live set, remixes and some collaborations. I have a few different things I want to do with the live set, but in general just want it heavy and wild…

Previous DOWNLOAD THIS NOW: How to Dress Well, “Ocean Floor For Everything”
Next REISSUE OF THE DAY: Aphex Twin, ‘Selected Ambient Works, Vol. II’