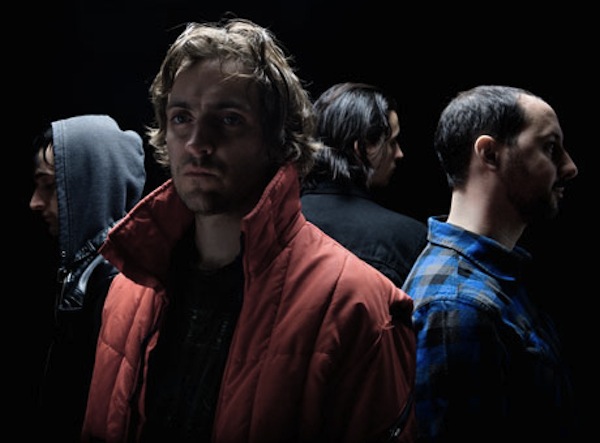 Breaking is a recurring self-titled feature where we spotlight rising artists who are actually worth hearing beyond an MP3 blog entry or two.

What has Earth done to warrant our cheering for it?
I think the planet does quite well for itself considering how hard we’re working to destroy it. The band name was never meant to be environmentally suggestive, but it has grown to mean many different things.

Now that we’re on the subject, we need to ask the obligatory “what’s the story with your name” question. We hear it’s taken from Invader Zim, but we’re not familiar with that show.
I’ve told a few parts of the story and it’s ended up getting a bit mixed up. The origin of the name came from a house party show that our friend Pete threw (as he often did). Someone was yelling “hooray for earth” in some totally random context; there were a lot of “hooray for blank” things flying around. But anyway, we jokingly adopted Hooray For Earth for the two-piece band we were at the party. I then had been seeing reruns of a long-canceled Nickelodeon show called Invader Zim. There was an episode where humans saved the planet from some aliens or whatever, and a flag saying Hooray For Earth popped up on the screen. It just double nailed it into place as a band name. I’ve tried to change it to something else several times since then, but it just never happened.

Spin called Hooray For Earth one of its 5 Best New Artists For March. Notice any changes once April came around?
I think things picked up a bit, yeah. It’s hard to say how press affects things nowadays; there are so many bands being thrown at everyone. Regardless, it’s really great to see an outlet like Spin givin’ you the thumbs up.

Please share your foremost influences. We hear Bowie, Primal Scream and some OMD for starters.
I’d say those are three huge compliments, but not anything that I pulled from. It’s difficult to approach the influences answer but I can definitely say that among musicians that really affected me growing up and within the past few years are Broadcast, Aphex Twin (and all his other things), and my massive Nirvana phases (1991-1994, and a 2001-2002 relapse).

When someone asked you to describe your music, you said, â€œIt is elated beauty and crushing anxiety put to music.â€ What do you find beautiful, and what causes anxiety for you?
I guess the feeling of “love” in its endless contexts defines beauty. And just generally being alive on this planet surrounded by every single person and all the madness that goes on in people’s minds–that is anxiety. I think even the sanest of people are probably questionable up there.

What would the band be doing right now if Hoorary For Earth wasn’t around?
I can’t speak for the other band members, but I’d just be doing some other music project. And bartending–I want to bartend really bad. If anyone reads this who would like to apprentice me please E-mail trooluvs@gmail.com.

Your music seems really sincere, from a song like “Surrounded By Your Friends” to the album title True Loves. What role does sincerity play in Hooray For Earth’s catalog?
That’s nice to hear. Within the past couple years–when I really started to take Hooray For Earth seriously–it’s become very important to me to write music and words without an agenda. I made music for a long time before last year’s [Momo] EP was conceived, and I was never comfortable. I was always throwing some anger or spiteful humor into everything, just lost in myself. The result was my own constant discomfort and resentment towards everything. Until a few years ago, I wasn’t able to let go of a lot of negativity and be happy with music making. Since then, I was able to open up and make things naturally. I’ve had many positive and sincere influences (people, places) become a large part of my life since I moved on from that mindset.

Your cover of Kanye’s “All The Lights” is pretty great. You’ve also attempted everything from Justin Timberlake to Owen Pallett. What’s your approach in selecting a cover?
[Laughs] The approach is usually just when I like a song so much I need to get it out of my system sort of thing. The Kanye song was more of a ‘dare’ situation.

You’ve just completed a small tour with Architecture in Helsinki. Is life on the road a drag or is this what it’s all about?
Touring is usually blast, but I hate being away from my peeps. It’s a win-lose.

There’s an explosiveness to your band’s sound. Is it difficult creating that largeness night after night?
Yeah, I always want everything to sound a certain way, and doing that is a constant battle. The way I write and record everything makes things quite difficult when it comes to playing it live with the rest of the band. We’re still exploring live show possibilities.

Amazon.com describes your album as a mixture of Squarepusher, Nirvana and Enya. Is your mind blown? Mine is.
I’m pretty sure that piece of commentary came from from when the band first started and a friend of ours wrote a partially hilarious bit on us for the local paper. Also the bio for us on AllMusicGuide is a crock of shit. Even better, that’s where iTunes pulls their bios from. So our bio on iTunes is a crock of shit too.

In retrospect, is there anything you would want to do on your sophomore album that you didn’t accomplish on the debut?
I wouldn’t really change True Loves on another go-around–it is what it is. But for the next record, I’ve definitely been planning some specific moves. You can probably expect it to be pretty different; to focus more on a specific sound set. I’m making demos now.

What’s one question you wish journalists asked you during interviews, and how would you answer it?
I guess a useful one would be something pertaining to the “synth-pop” tag we’ve earned, so then I could blab about how much of what’s being perceived as synths is actually guitar and ambient noise, with a few obvious exceptions where a Juno 6 is in your face. This album was build mostly on live drums and low-tuned guitar/bass foundations. Much of the synth is just to fill it out what’s already there, or to get some blatant sparkle going atop the songs. More ‘synth’ sound is sampled vocal and what-not, or actually just several layers of my own vocal overdubs.

Previous The Pixies Promise To Hit New Stops On ‘Lost Cities’ Tour
Next NEEDLE EXCHANGE 064: An Exclusive Mix By … Ursula 1000